The President’s First 100 Days: Inside the White House 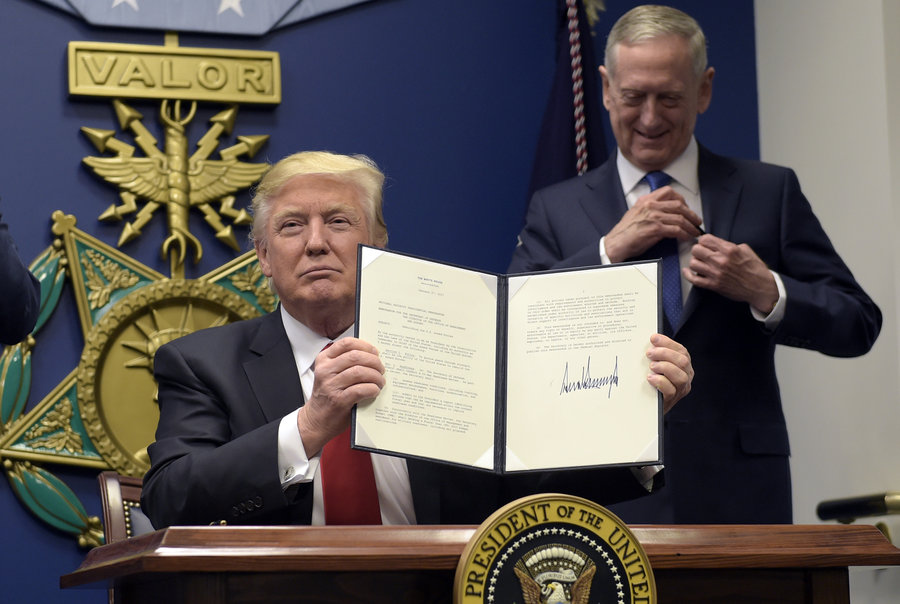 April 28: the date that marked President Trump’s first 100 days in office. Throughout history, a president’s first 100 days has been the occasion to look back at everything that has been accomplished since taking office. Under FDR, the 100 Day Congress was one of the most productive congresses that the US has ever had.

Since January 21, 2017, Congress and our president have not entirely been on the same page. This discrepancy has not stopped President Trump from working hard to push the nation down the path that he sees as the best for the Democratic interest.
There have been several major implications in the past 100 days: the immigration ban, the new health care act, and most recently, the conflicts with Syria and North Korea. All three issues have thrust Trump into public scrutiny.

With the recent implications in North Korea, the Islamic State and Syria, the western world has gone into a panic. President Trump, Vice-President Pence, and the Washington DC contingency are taking it one step at a time. Their primary focus has been to preserve democracy and keep the world safe from those who seek to take it from the human race.

As of now, the most direct action we have seen from the Trump Administration was the dropping of the MOAB on the Islamic State and the launching of 59 Tomahawk Missiles on Al Shayrat Airfield in Syria. The Massive Ordnance Air Blast bomb – or MOAB – was dropped in Afghanistan, at the authority of General John Nicholson. This was done in order to destroy a tunnel and cave complex used by ISIS, but officials have stated that there was a secondary purpose for the bombing: to demonstrate how serious the US is about eliminating the threat that ISIS poses to global freedom.

There is a clear distinction to make here: the US was not targeting Afghanistan or their government. The Trump administration, and those serving in the Middle East, are motivated by the goal of eradicating the Islamic State’s threats to freedom around the world. This bombing has put ISIS on alert. President Trump’s goal is to make the world safe and we must trust that his actions are taken with that goal in mind.

Then, in a turnabout, within the first few months of his presidency, Trump ordered the attack on the airfield in Syria. Trump’s bravery has been praised around the globe, except in Russia, where President Putin has aligned himself with Assad and the horrific Syrian regime. While this action eliminates the hope of America working with Russia to fight ISIS, we gained support from other nations. Due to Trump’s brave decision, the Assad regime is now on the alert for fear that the President of the United States of America has painted a red “X” on the regime’s back. Without this response to act, who knows how many more would suffer from this merciless denial of basic human rights? While the actions may have have been a bit rash, they did get the job done.

However, in eliminating one threat, President Trump has created another demon with which we must now deal. Prior to the strike, the US, Russia and the Assad Regime were united in the common goal of fighting ISIS. But with this missile strike, nations are realigning sides and prioritizing. Russia and Assad have chosen to focus on protecting the Syrian government, while the US is still focused on ISIS, keeping Syria in check during the conflict. President Trump, in a clutch moment, made his priority the protection of humanity.

Another potentially dangerous situation that has presented itself within the President’s first 100 days is the increased missile activity in North Korea. The president has placed tighter sanctions on North Korea in an attempt to pressure Kim Jong-un to dismantle their nuclear and missile programs. Even though recent North Korean tests have failed, increased activity concerns surrounding nations and the western world. The US government released the following statement about the conflict: “The United States seeks stability and the peaceful denuclearisation of the Korean peninsula.” It seems very clear that President Trump and the United States government is willing to take extreme measures in order to protect freedom and human rights. Should these actions need to be initiated, our president will be tasked with leading the nation into a military conflict. We have elected our president to protect us.

In terms of domestic policy, Trump was quick to act after taking office to enact an immigration ban on several Middle Eastern nations. President Trump justified this ban by stating that he wanted to prevent another tragedy like 9/11, one that he claims could have been prevented. Since being enacted, the temporary ban has been revised several times to more accurately protect the nation from possible terrorists and has been recently blocked by a California court. President Trump has taken a lot of heat for this ban and has been forced to defend himself on numerous occasions, even alluding to a possible Supreme Court case over the ban. Throughout this process, Trump has shown extreme confidence that this ban is working, will continue to work, and that it is Constitutional in the eyes of the Supreme Court. (A possible reason for this confidence could point to his appointment of Justice Neil Gorsuch to the court.)

In addition to the ban, President Trump has also fiercely supported the repeal of the Affordable Care Act, or Obamacare. Several bills have been proposed in the House to not only roll back Obamacare, but to initiate a new plan. The most recent plan offers federal mandates to states that would ensure certain “essential health benefits” that most Republicans claim have driven up premiums. This bill, currently being examined by Congress, has gained wide support across the board. Other proposals have been opposed by various factions in Congress, but this bill proposes the most moderate solution thus far and is supported by most Republicans in Congress. Obamacare is supported throughout the Democratic Party, and the divisions in the Republican party have not been helpful in gaining public support. In order for a bill of this social magnitude to be passed, it must be one that satisfies all the Republican representatives and senators. The bill is expected to be passed in the near future due to the support it is garnering in both the House and Senate. (This bill passed the House on 5/4.)

While these were the major events that consumed President Trump’s first 100 days, there are countless others that were headlining the news over the past four months. These actions offer the people of America and the world a first impression of our new president and what he will stand for over the next three and a half years.