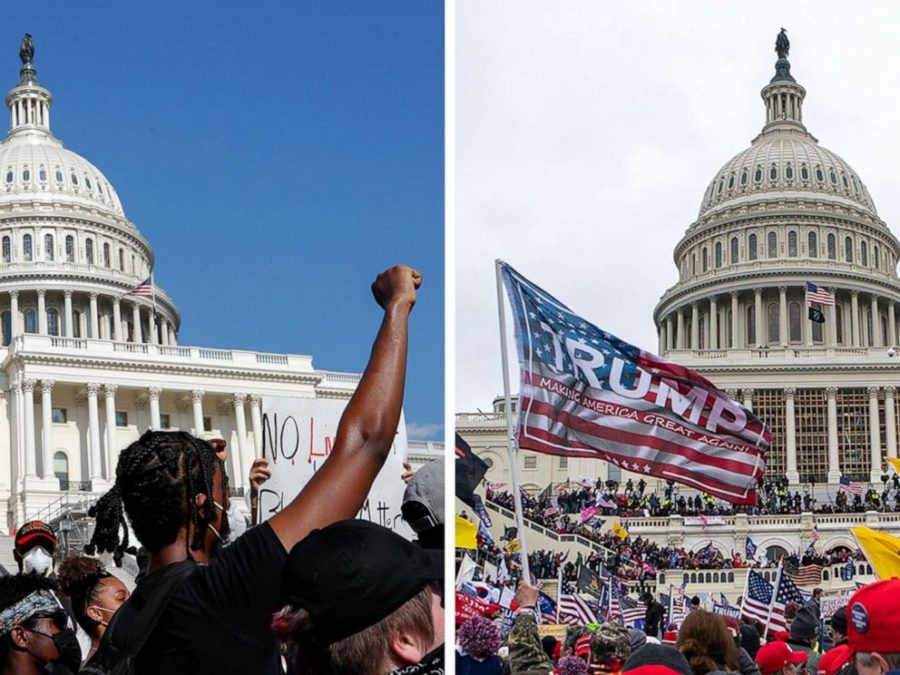 One was a public despairing cry for justice, equal treatment and change in how the system affects a particular set of people and while the other was an attack on a government building that sent officials running and hiding in fear for their lives largely due to the outcome of a recent election. Some have chosen to parallel the BLM Movement and the Insurrection in purpose, approach, and results, yet the two could not be more opposite. There are some who equate the two, so lets make some distinctions to show just how different they are, and making those distinctions is so important as it reveals what lies at the heart of each group and movement.
For those who don’t know, an insurrection is “a violent uprising against an authority or government.” On January 6, 2021, several hundred Trump supporters stormed the Nation’s Capitol to “overturn an election the president had repeatedly and falsely claimed was stolen.” Imagine being able to roam freely through the halls, taking selfies and stealing souvenirs, smashing doors, defacing statues, and causing senators to fear for their lives and walk out alive with no interference from the police. Afterwards, Mayor Muriel Bowser of DC imposed a curfew, “from 6 pm on Wednesday, January 6, until 6 am on Thursday, January 7…no person, other than those designated by the Mayor, shall walk, bike, run, loiter, stand or motor by car in any public place in the city.”
By contrast, on June 1, 2020, a diverse crowd of a similar size gathered outside the White House to protest the police killing of George Floyd, but were met by an army of federal agents, chemicals in the form of tear gas, and rubber bullets. Donald Trump’s words in this situation for justice were, “I am dispatching thousands and thousands of heavily armed soldiers, military personnel and law enforcement officers to stop the rioting, looting, vandalism, assaults and the wanton destruction of property…We are putting everybody on warning, our 7 o’clock curfew will be strictly enforced.” Compare the scenarios and focus on the response to each event. If the statements alone don’t cause you to rethink comparing the movement to the insurrection, and review people’s perception of the two, keep reading.
Black Lives Matter was founded in 2013 in response to the acquittal of George Zimmerman, better known as 17-year-old Travyon Martin’s murderer. Was there ever a time you had to worry about walking home from the store with Skittles and an Arizona while wearing a hoodie in the rain, thinking you were a threat? No? This is a sad reality for some. BLM attempts to speak to the core of systematic racism, mistreatment, marginalization and the disregardance of life extended to people of color. The storming of the Capitol Building happened in response to “45’s” loss of an election. Where BLM wants equality, the insurrection just wanted their president back.
Now let’s fast forward to 2020, where outrage was again sparked by the murder of George Floyd at the hands of a Minneapolis Police Officer. While BLM was birthed out of anger, frustration and outrage at the mistreatment, systematic racism, and senseless killings of people of color (with those committing the crime and walking free), the protests themselves, and the message of Black Lives Matter, has been an all around peaceful one even while facing opposition. Standing in stark contrast to the insurrection, at BLM gatherings people of all colors and walks of life stand in solidarity with the message that black lives matter, participating together in the protests. While there were also different walks of life participating in the insurrection, it wasn’t peaceful, it broke laws, and it struck fear (and anger) in the American people. Where some have tried to taint the message of BLM by countering that “all lives matter,” BLM realized the need to emphasize black lives matter in society along with everyone else’s lives. Many would agree that this seems to have been forgotten in our society where black people are marginalized and treated less than equal in many areas.
In contrast to a BLM gathers, In January 6, 2021, a number of Trump supporters took his speech as a command to rise against the government in an attempt to overthrow the capitol building, which almost resulted in the lynching of Nancy Pelosi and Vice-President Michael Pence. According to an article written by the New York Times, “A mob overran the nation’s Capitol, as lawmakers hid in fear. Wholesale vandalism. Tear gas. Gunfire. A woman dead; an officer dead; many injured. Chants of ‘U.S.A.! U.S.A.!’” These events are in no way similar to what happens at BLM protests.
While we are all free to have our own interpretation of what we’ve seen (both BLM protests and the insurrection) it is a little unnerving to know that the two have been grouped together. It is also encouraging to read about the various news articles that have spoken against and debunked the comparison.
So, how can we equate video footage of people storming the Capitol building to people peacefully protesting for the rights of black lives? Yes, dozens were arrested in the insurrection, but they’re still living to see another day, right? Their families aren’t marching for justice because they were wrongfully murdered. For BLM, we are marching because of the lives we’ve lost, whereas the insurrection marched for an election they (think they) lost.