Will You Be the Change While You “Keep The Change”? 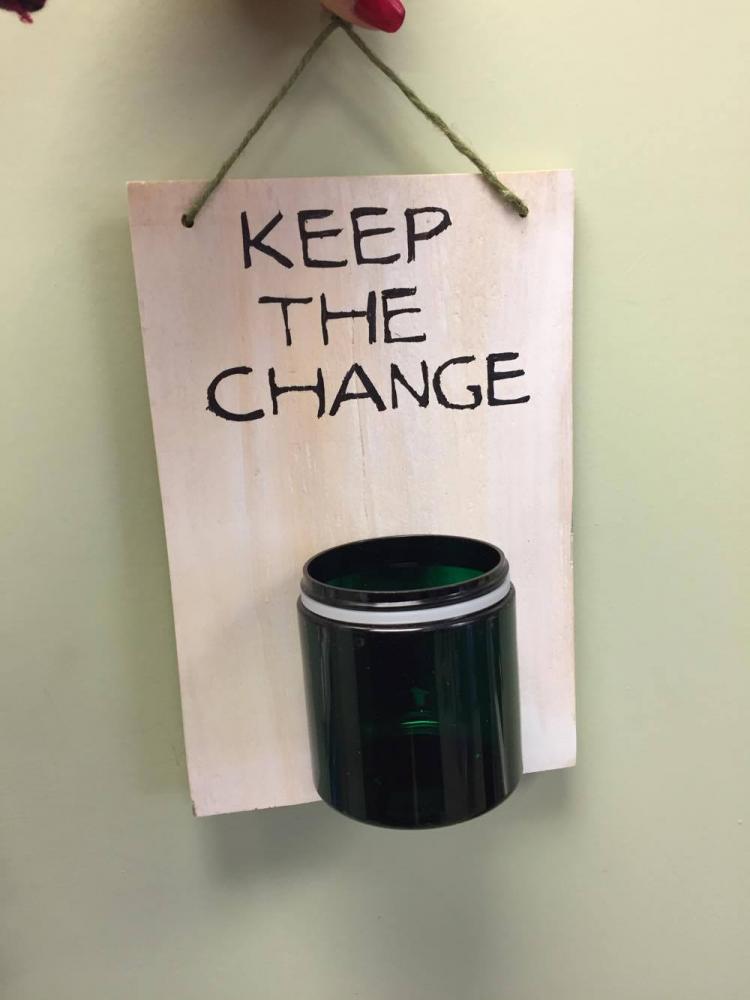 Can a piece of white distressed wood, stenciled with black letters spelling out “Keep The Change” bolted to a green jar underneath really make a difference? The answer is, a definite yes!
When considering her Life Skills students, Mrs. Sloan wanted to come up with a project that would be practical and of use – something with meaning beyond the holidays. In early January, she came up with the idea to create a container that would hold change or items from pockets when doing the laundry.
Ms. Schneider, Ms. Chamberlain, and Mrs. Sloan purposely wanted something that was not related to a holiday so that their students with special needs would realize that in addition to their Snowman Pots, they could make projects/fundraisers that were useful even though a holiday would not be the theme of the project.

The process the students followed was to first gather plain pieces of wooden boards, sand them down for a smooth finish, paint them white with a distressed look (a new word and new process the students have learned), and finally stencil the saying “Keep the Change” at the tops of the boards. After everything was dry, one or two students drilled holes for the jars to be hung from. The students then attached the jars and tied on the strings to keep the jars hanging. The very last step was to develop a flyer, collect and process all of the orders and deliver orders to the customers.

The project is currently running. The jars cost $5 each. (Flyers/order forms can be found at Mrs. Kauffman’s desk.) The jars will be delivered in March, with all proceeds going to a charity that the students will choose.

Ryan, Jose, and Jenny told me they enjoyed this project. Ryan loved painting the boards with the white paint, Jose enjoyed drilling because he’s done it with his dad at home, and he finds it easy to do. Jenny found the sanding to be the easiest and her favorite part. Ryan said he found that the most difficult step to be painting evenly, Jose worked hard to make sure he drilled on the marks, while Jenny found sanding the boards all over and evenly to be the most difficult. These students all want to order a jar for themselves or for their parents to hang near the laundry. Ryan, Jose and Jenny want to continue working on projects like this in the future. These stude

nts, along with their peers in Room 107, are creating change in the world in the way that Gandhi suggested, “Be the change you want to see in the world.” Our students are making a change simply by “Keeping The Change”.