Shamefully So, Abuse is no Laughing Matter 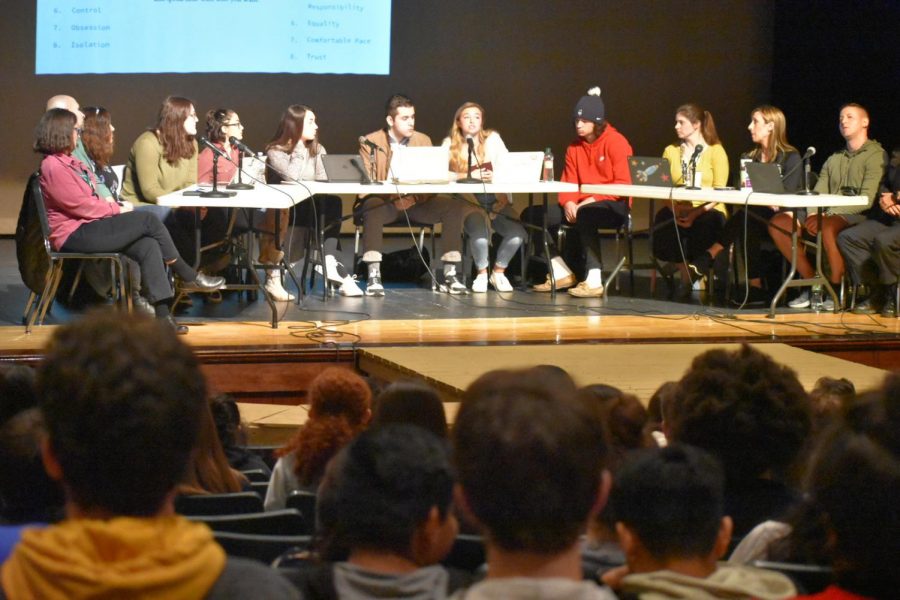 Abuse can haunt people for years, or, in some cases, their whole life. To those who were paying attention to the Junior/Senior assembly on Wednesday and witnessed the ignorant behavior that was present, we didn’t do our part by being respectful to the presenters, or by recognizing the problem of abuse.

We are not getting let off the hook easily. I know for a fact that there were people sitting in the auditorium coming to the realization that they were in abusive relationships; or some who recognized that they were experiencing abuse in their own homes. There were some who were remembering the times they were screamed at to the point where their hearts felt that they were about to stop. There were some of our peers – our friends – who were reliving the times they were hit, or sexually abused. I had to walk someone out of the auditorium because for her, reliving the pain she experienced while people laughed was Just. Too. Much.

This is why I stood up, mic shaking in my hand, to let our juniors and seniors know, abuse is not a joke. Abuse is not something that goes away with time. The scars left by abuse last for a lifetime, and even a warmly intended touch on the shoulder can send a person spiraling downwards. Anything we say may be taken in a way we didn’t intend it. Mr. LoAlbo mentioned that sometimes people say something with a logical point, but people may perceive it from an emotional standpoint, and react in a highly emotional way. While someone may not have negative intentions, it can be perceived that way and can cause a spark to set flame to a situation.

The number of people being abused today is startling: one in three women and one in seven (possibly as high as one in four) men experience abuse in relationships. But straight people aren’t the only ones being abused; unfortunately, people in queer relationships suffer even more frequently. According to a survey completed by the Centers for Disease Control and Prevention (CDC), “domestic violence against a woman was reported by nearly 44 percent of lesbians and about 61 percent by bisexuals compared to 35 percent of heterosexuals. Among men, 26 percent of gays and about 37 percent of bisexuals reported partner violence compared to 29 percent of heterosexuals” (Reuters.com).

There is such a stigma around being abused or being in abusive relationships. In these relationships, when one party starts to show repetitive submission to the other partner, they believe that the submission will show their partners how much they love them and are willing to make sacrifices for the other person. This is not love.

If we don’t learn how to identify unhealthy relationships, we will perpetuate these dangerous situations. The reality is that abusive relationships can happen anywhere and to anyone, in a variety of different patterns; whether it’s someone crossing physical or emotional boundaries, or how others feel desperate and weak and end up compromising their beliefs to show just how much they love someone.

Sadly, a lack of interest or respect for the topic seemed to resonate through Wednesday’s assembly. People were extremely disrespectful and completely disregarded their peers’ feelings.
Subsequently, Tim Krasniqi, a BHS senior, created a panel that volunteered to speak on stage to address people’s actions, but also to emphasize that abuse isn’t something to laugh at or make fun of. What Tim did was extremely admirable. Tim was willing to stand up and remind us to stop being bystanders. It takes a lot of courage to go up onto a stage in front of one’s peers and explain why what they had done was wrong. It was very moving to see the panel members passionate enough about the topic to organize and run an assembly that reiterated the importance of the topic to the junior and senior classes. The panel worked together and showed that people care, that students care, that teenagers like us care and that topics like unhealthy relationships need to be spoken about.

There will always be people who may not agree with your beliefs or opinions, but part of our responsibility in becoming older comes with recognizing our ability to tolerate something for the greater good of another. Starting to acknowledge – and eventually practice – patience and understanding for other people and their situations will help us grow and learn respect for others regardless of beliefs and opinions. We can then begin to have more open conversations like Friday’s assembly…and just as many discussions like those that were sparked by an unfortunate disruption.

I am hoping that the discussions will continue, that people will focus on helping themselves get out of abusive relationships, and take steps towards creating a more tolerant environment, one in which we are able to talk about serious topics like abuse. We need to create an environment where we can reassure the people experiencing the multiple effects of abuse that they are not just objects – they are people who deserve respect.

Just because the assembly is over does not mean the conversation should stop. If we continue to shed light on situations like these, just maybe our words will impact those who really need the help and encouragement.