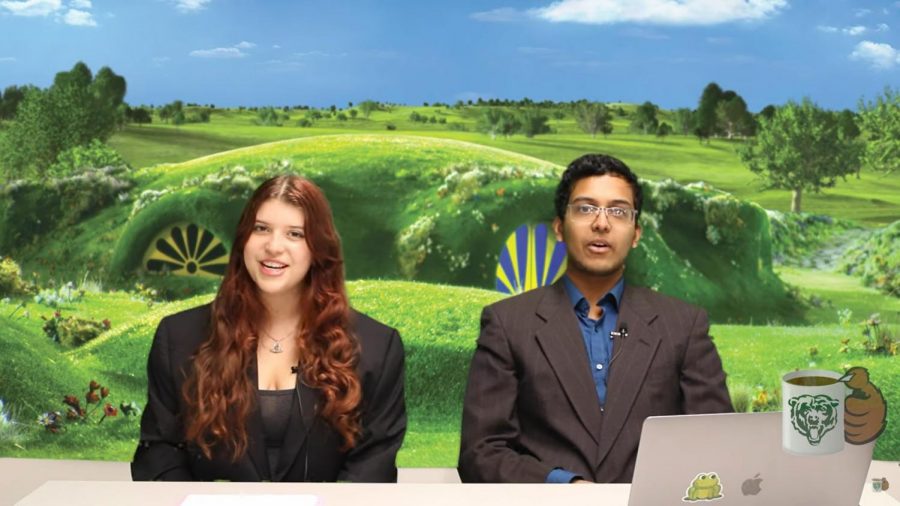 Up with a smile, Morning Brew main anchors Talia Rubeo and Noel Kakkanattu bring the energy.

After many years of attempting to get it off the ground, Brewster High School’s first morning show is finally airing in classrooms across BHS!
The journey to get the first episode on the air was not as easy as many believe. It all started back in August when I headed to the high school to check my class rank (I never found out what it was). That was when I came across Mrs. Chalmers. She asked if I was a good editor, in which I said yes. Then she asked if I wanted to help her launch BHS’ first morning show. From there, I got to work immediately. The first two people I called were Noel Kakkanattu and Talia Rubeo. Noel and I, for years, have been creating content for his YouTube channel, SageBurrito 1826, and I knew from his charismatic personality, that he would be great for the role. Talia was a clear choice for me as well, knowing her since middle school: she’s very outgoing and witty, and I knew she would love this opportunity.
Behind the scenes crew members piled in, including Sophia Moran, who handles all logistics and supports the show behind the scenes, John Tomassetti, our graphic designer, and Gabriel Weber, our co-editor. Tahj Arnold came on board as a reporter, Jack Jordan for sports, and then came Arthur Panetta. Arthur was fairly hesitant about his position. His original role was supposed to be the weather, but the cast agreed that reporting on the weather in a timely fashion would be challenging, and arguably, boring. What we decided to move forward with was “Ask Arty,” a Q&A show where students can submit their questions through The Morning Brew Instagram, as well as be told a “motivating” quote of the day. With all of us together, the show was ready to roll.
We knew the first episode had to be spot on. The first impression is critical to get people hooked, as well as set a precedent. But what could get everyone’s attention in just one pilot episode? Devious licks. For those confused, it’s a pretty dumb TikTok trend where students would steal items from school properly, like soap dispensers, toilet paper, or even a whole sink! We covered the ongoing crisis of the missing soap dispensers, and what everyone’s thoughts and opinions were on the trend. Arguably, I thought that was the most optimal first story that we struck. The trend was still fairly relevant and got a lot of people talking. After making rapid deadlines and last second editing fixes, the first episode of The Morning Brew aired on September 28th, 2021, during spirit week. The first episode came out to critical acclaim. So much support poured in from our student body, and even Brewster parents showed love for the show. The show was a hit. Our own cast members were even recognized in public, from Talia being recognized in a local pet store, to Jack being asked for a photo at Buffalo Wild Wings.
After the first episode aired, filming and editing only got easier. New members came on board, including our new sportscaster, Carissa Alvarado. Carissa came to the show after the first episode. With her outstanding experience in acting, and her knowledge of what’s happening in sports throughout BHS, Carissa showed that she was perfect for the role. As we continue to learn and understand the aspects of “film production,” we’re hoping to evolve and grow for the better. At the end of the year, we’ll be recruiting the next crew of The Morning Brew from the Class of 2023, continuing a legacy.
As we continue to work on more episodes, we’re continuing to pursue our main goal which is to make the best content possible. After last year’s school year, our school spirit went quiet, figuring out how to cope with a damaging pandemic. We knew the school needed to come back bigger and better than ever this year. As seniors, we know that school can be very stressful and mentally draining. Mondays are notorious for being the most dreadful part of the week, but we want people to look forward to Monday mornings, whether it’s something to laugh about, or something to learn about our school that you might have not known. Spotlighting our student body is the soul of our show, something a morning announcements email cannot replicate. Producing this show has been a huge learning experience for us, but also a new bonding experience. Filming and writing for the show has been one of the most unforgettable experiences I’ve had, and we’ve created so many memories, with many more to come.
Be sure to catch The Morning Brew on Mondays, biweekly, on our Youtube channel, or during your second period class!