Impeachment: A Guide to How We Got Here 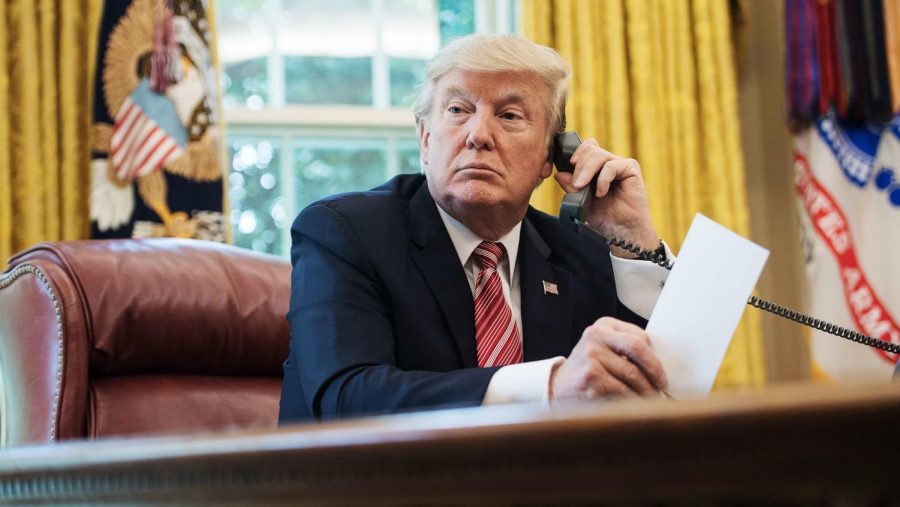 It all comes down to how the House and Senate interpret what went on in that phone call and what evidence emerges regarding Trump’s relationship with Ukraine. (Photo courtesy Getty Images)

With the 2020 election fast approaching, scandals keep arising left and right, and each party is attempting to obtain the upper hand. The biggest issue which has arisen from this race has been the Ukraine scandal, which is so momentous that it may even result in impeachment for President Trump. However, this issue does have many different layers and is very complex. Impeachment is neither a guarantee nor an impossibility. It is important to recognize every level of this problem, as well as every viewpoint.

WHAT HAPPENED BEFORE THAT PHONE CALL
During the Obama administration, there was an uprising in Ukraine, which led to the formation of Ukraine’s new government in 2014. Throughout Obama’s presidency, Vice-President Biden lead the majority of foreign affairs programs and efforts taken by the United States. In regards to efforts in Ukraine, Joe Biden was leading them. Concurrently, Joe Biden’s son, Hunter Biden, joined the Board of Directors of Burisma, an energy company located in Ukraine.

Although there was no clear evidence of wrongdoing from either of the Bidens, there are many suspicious circumstances around the situation. No charges or clear complaints were ever made.

These investigations were made in exchange for about $400 million of military aid from the United States for Ukraine.

Meanwhile, the US Ambassador to Ukraine Marie Yovanovitch – appointed during the Obama presidency – was conducting investigations into Ukraine’s government corruption. The president of Ukraine was clearly not in favor of these investigations, stating during the transcripted phone call, that “it would be very helpful for the investigation to make sure that we administer justice in our country with regard to the Ambassador to the United States from Ukraine as far as I recall her name was Ivanovitch. It was great that you were the first one, who told me that she was a bad ambassador because I agree with you 100%. Her attitude towards me was far from the best as she admired the previous President and she was on his· side. She would not accept me as a new president well enough.” About two months before this phone call, Ambassador Yovanovitch was recalled from her post in Ukraine amongst claims she was undermining Trump’s efforts there.

It is important to note that by §30121 of the United States Code it is illegal to accept, solicit, or receive anything of value from a foreign nation in a U.S. election.

THE WHISTLEBLOWER
In August of 2019, the whistleblower, an unnamed CIA agent, made a complaint to the Inspector General of the Intelligence Community. The Inspector General found the complaints made by this agent to be credible, and found them of urgent concern, forwarding them to Joseph Maguire, the acting Director of National Intelligence. Although Maguire did find sufficient evidence to bring forth this complaint to the House Intelligence committee, he was unable to do so, based on orders from higher ups in Trump’s cabinet. Eventually though, he was subpoenaed and had to testify in front of the House Intelligence Committee.

The whistleblower complaint detailed that there was clear foreign pressure from President Trump, his personal lawyer Rudy Giuliani, and Attorney General William Barr, to solicit interference in the 2020 presidential election. The whistleblower followed all official channels in his reporting. All accounts have been deemed accurate.

Although there is intense pressure from the President and the right wing, as well as from media companies, under the Inspector General Act of 1978, the identity of the whistleblower is preserved. Additionally, since the first whistleblower’s account, a second whistleblower has come forward with first-hand knowledge of the allegations facing President Trump.

IMPEACHMENT PROCESS
All of the above information has lead us to where we are today—the impeachment process. To clarify, impeachment is not singularly about removing a president from office. Impeachment inquiries may be made against a government official, and a trial is held. Currently, impeachment inquiries have begun, which means that Congress is debating whether charges should be brought against President Trump or not.

In the first stage, which is voting to actually impeach a president, the House votes. Although the House majority is Democratic, it is possible that some blue representatives may flip and vote against impeachment. Until an actual vote happens, there is no way of knowing what will culminate. However, if the majority of the House votes for Impeachment, then impeachment proceedings will begin. This vote means that the Senate will essentially serve as a jury on the case of the President. However, a conviction cannot occur with less than two thirds of a majority in the Senate, and unless more information comes out, that is highly unlikely.

SO, WHAT DOES THIS ALL MEAN?
Well, that is for you to decide. There is clearly a lot of suspicion surrounding Joe Biden and his son as far as their dealings in Ukraine. But it is also clear that there was wrongdoing on behalf of President Trump as well. Whether his actions are deserving of impeachment is for the House, the Senate, and the 2020 voters to decide. This issue will definitely affect the election in 2020, and it could cost Trump the election if the situation continues to worsen.