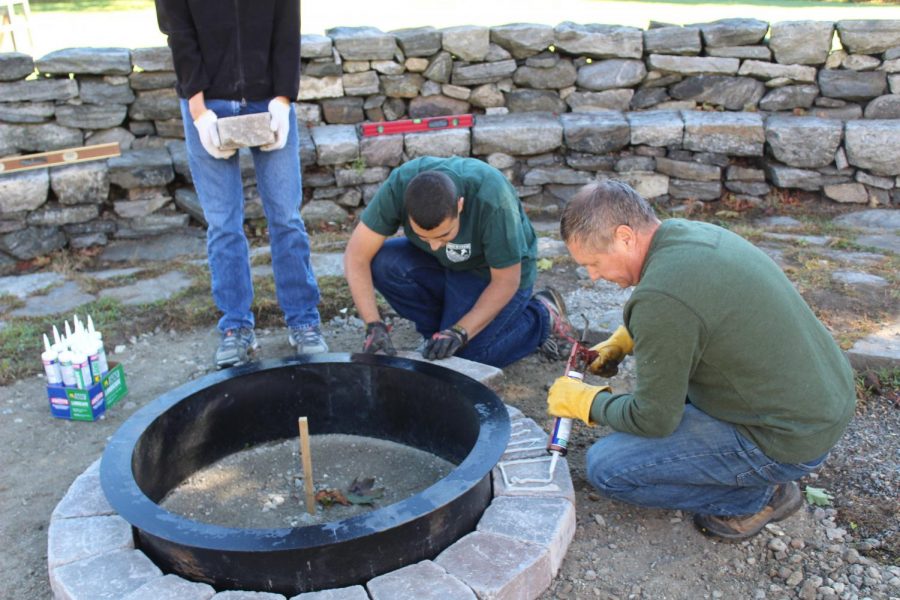 Working on his firepit at the Elk’s Club , Matt Scipioni represents the hard work and dedication necessary to be an Eagle Scout, as also embodied by fellow Eagle scout Peter Arnold.

The requirements necessary to achieve the designation of “Eagle Scout” take considerable time to fulfill. Perhaps that is why just 4% of all Boy Scouts hold the rank. Two of them are BHS seniors.

Peter Arnold has been a Boy Scout since he was in the first grade, when he began as a Cub Scout. Matt Scipioni used to watch the Memorial Day Parades where he became enamored with the uniforms he saw the scouts wearing. Both boys decided, at an early age, that they wanted to see scouting to the end: they knew they would someday attain the respected rank of Eagle Scout.

We sat down with both of them, and when asked what their favorite memories about scouting were, both boys immediately responded with, “camping,” followed quickly by enthusiastic conversations about the deep friendships they have made along the years. Both boys feel a responsibility to mentoring the younger scouts. Throughout their years as Boy Scouts, Peter and Matt collected various merit badges. Eagle Scouts must have 21 badges to be eligible (11 specific badges required and 10 choice); Peter and Matt each have an impressive 48 merit badges. Peter claimed the badge he had the most fun earning was for basketry. Matt remembers working hard for his badge in kayaking.

Before Peter and Matt – both members of Troop 1 – celebrated their eighteenth birthdays (one of the criteria of becoming Eagle Scouts), they had to complete the rigorous processes involved in becoming Eagle Scouts, including and culminating in the completion of individual projects: Peter constructed a bulletin board/kiosk for Wells Park, as well as a quarter mile long walking path with trail and distance markers; Matt built both a firepit and a horseshoe pit at the Elk’s Club on Route 22 in Brewster.

Each of the boys had to submit proposals with clear plans as to how they would proceed, where their funding would come from and how their intended projects would benefit their local community. The plans would have to include each scout’s role as a leader and a delegator, and each project would include the need for a crew willing to take direction and do a fair amount of physical labor. Their proposals were then submitted to the Committee Chair, Perry Verrino, and the Scoutmaster, Adam Payne, who would subsequently present the boys’ plans to Council for approval and guide these young men through the completion of their projects.

The Eagle Scout projects were not easily accomplished. There was considerable planning that had to be done and followed through on. Matt cited that the need to keep everyone on his crew informed proved to be more challenging than he expected; delegation, he claims, means having to know everything that is going on in each facet of the plan. Each scout was required to keep a workbook that was submitted at the conclusion of the construction. Peter talked about the need to keep the overwhelming amount of paperwork organized. He also discussed the time management skills that were needed to keep his plan on schedule.

Both scouts were successful in the completion of their projects and discussed how each project would benefit the community. Matt was very clear on the fact that the Elk’s Club hosts many events for the community – not just for their members – and is proud of the quality of the Unilock fire pit and the regulation horseshoe pit that will be used at upcoming events hosted by the Elk’s Club. Peter explained that the kiosk with its encased bulletin board will keep the community informed, while the newly marked path can be used by parents while their children are on the playground at Wells Park.

Matt said that he would advise any scouts considering Eagle Scout designation to “stay persistent and do a little at a time” and most of all, “Don’t be afraid to ask for help.” Peter advised, “Stay on top of the paperwork and plan your time well.”

Each of these young men cited the help they received on their journeys to the top of the Boy Scout ladder – Matt requested a ‘shout out’ to Bruce Markert and Keith Greene. As Eagle Scouts, they are registered as adult leaders in the troop. As they will be off to college in the fall – Peter to Seton Hall to study finance and sports management, Matt to Mount Saint Mary to study adolescent education – they are granted what is called “Unit College Reserve” – and both scouts intend to stay involved with Troop 1.

It was an easy task to talk to these two seniors about their accomplishments. When asked what they are taking from their years in scouting, Peter responded quickly that he would bring skills like fire building and tent pitching, and the ability to lead, into his future. He fondly remembered weeks spent at Curtis S. Reed Scout Reservation on Brant Lake in the Adirondacks. Matt talked about the people he has formed relationships with and the skills he gained in tying lashes, and first aid. When our time was up, Matt looked a little disappointed. “I could talk forever about scouting.”