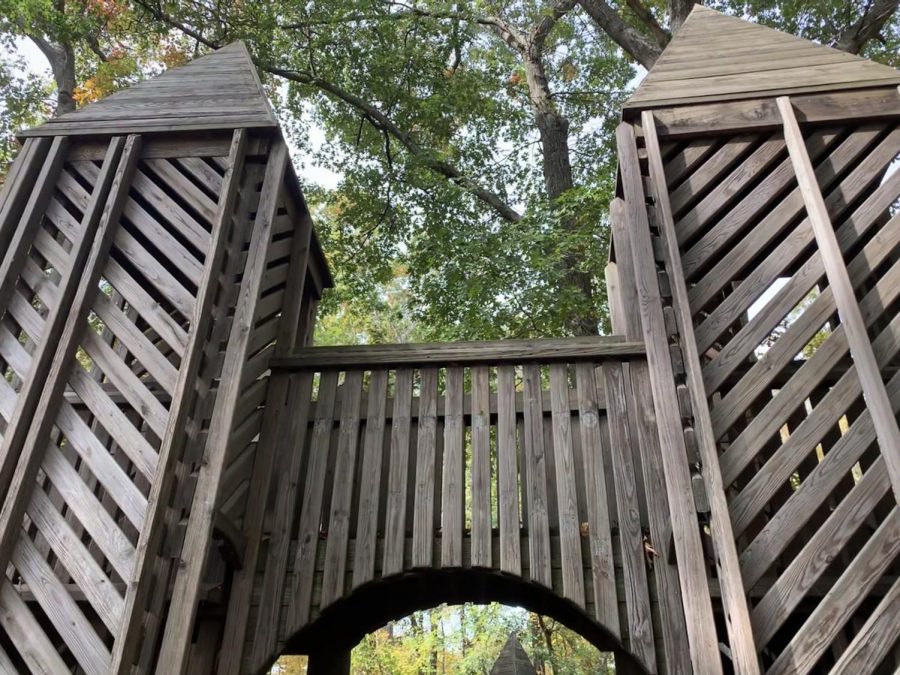 On November 17th, beloved Castle Park was torn down for new construction. This article was written prior to its demolition and the announcement of a new park. It has been updated to reflect these recent events.

Castle Park was haunted. At least that’s what you’d heard from the very beginning.

The park was haunted with ghosts around every turn. It was already filled with spiders in every corner and in the looming towers, so it wasn’t hard to believe that ghosts were in there, too. If it was haunted by the occasional specter or not had yet to be seen, but more importantly, it was the home of the bird that pecked the slide, the squirrels that ran in the forest behind it, and every single spider hiding in the corners. And it’s these memories that make the former state of Castle Park so troublesome.

Castle Park, sadly, was not what it used to be. Everything was still there as it was the day it opened: the towers still loomed,the bridge still sagged, and inscriptions with the names of those who built it could still mostly be read, but it was missing what made it so special and wonderful: families. It was missing kids and laughter and smiles and fun. Those kids who used to frequent the park had mostly grown up, and with the world changing as it is, the park had fallen into disuse.

Castle Park was originally built and designed by parents for children. Building this park was a community effort, a show of how much they cared about their kids, about how this community had come together despite any difference that normally separated them, political or otherwise. Students at Garden Street and JFK collected “Pennies for Play” like students do now with Box Tops for Education. Parents spent their free time and weekends planning and physically building the park itself. Those who made donations had their initials stamped into the bolts on the bridge that, although faded, still remained intact until their removal.

The park had lost its original charm when we needed it the most. This park was a landmark, a symbol of community bonding, and now more than ever, we need to unify again, and before it was removed, Castle Park was just the place and project we needed.

Thankfully, this “haunted park” will be getting some new life though as early as the spring. Councilman Eric Larca says plans to replace and add new equipment to the wooden park are in the works. “We hope to have it open this spring,” Larca says. His plans for renovation include new bridges, slides, and more of everything that made Castle Park so unique in the first place. And what really made it unique were the people of this community who met there every day.

We need to come together again as a community and think about our kids who are stuck inside sitting at a computer all day long. They need to experience what we only remember on those slides and in those towers. Despite the rumors of it being haunted, or maybe because of them, it’s was an important part of Brewster’s history, showcasing a time when an entire community came together.

With these upcoming new additions, new life will hopefully be instilled into the park, and with that, the children and the laughter will return.