Conspiracy Corner Presents: Are the Men in Black Really Real? 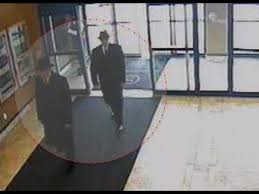 I’m sure you’ve heard of the movie franchise Men In Black. Two guys, dressed in black, who hide the existence of aliens from people on Earth. Pretty cool, right? But I bet you didn’t know that it was actually based on an urban legend.

While there isn’t much evidence, there have been multiple sightings of “men in black” who do the same thing as the fictitious men in black, but in real life.

The idea behind the men in black is that they are men, obviously dressed in black, who are often described as having no eyebrows, eyelashes – in fact, they have no hair at all; their skin is cold and they wear blank facial expressions. People who claim to have seen them say that they don’t appear to be quite human. They communicate solely with people who have seen and researched UFOs or have sincere belief that aliens and UFOs exist.

Apparently, when these men in black approach you, they present themselves as members of a governmental agency. Their intention is to intimidate people into staying quiet about aliens’ life and what they know. There are thousands of people who claim to have had encounters with men in black.

Albert K. Bender served in the air force during WWII. He had always been interested in UFOs and the possibility of alien life. He founded the International Flying Saucer Bureau and published several issues of a small magazine called Space Review. He claimed to have made a few groundbreaking discoveries that would prove the existence of aliens. However, something stopped him from publicizing these discoveries.

Bender alleged that he was visited by men in black. He wouldn’t say much about the encounter, but he did say that the men in black told him to stop communicating with the aliens or he would suffer serious harm and be put in jail. Not long after that, one night while he was home alone, Bender got a strange call from an unknown number. He said that he could feel that someone was on the other side of the line; his head began spinning, and he felt that something was compelling him to stop talking about aliens at all. His friends and family said that the event changed Bender.

Soon after, he stepped down from conducting the International Flying Saucer Bureau, and stopped publishing the Space Review. He never spoke again, to anyone, about UFOs or alien life. Although years later, Bender went on to write a book called Flying Saucers and The Three Men. People who read the book reported that it sounded like Bender withheld information, and that a lot of the information in the book didn’t make sense. Bender passed away in 2002, and took his secrets to the grave.

Jack Robinson was another UFO researcher who lived in New Jersey with his wife Mary. In 1968, they were reportedly terrorized by a man in black. He would stand across the street from their apartment. The Robinsons said that their apartment appeared to have been rummaged through. Across the street from them, the man in black continued to stand until finally, after observing him for three days straight, the Robinson’s friend, a man named Timothy Green Beckley, managed to take a photograph of the man in black.

On October 14th, 2008, near Niagara Falls, Shane Sovar, a hotel manager, along with a security guard at the hotel, claim to have seen a large triangular UFO outside the hotel. The incident was investigated by the Aerial Phenomenon Investigations Team, who reported that three witnesses had also seen two men in black visiting the hotel. They terrified the people in the lobby and continued looking for Sovar and the security guard. When Shane looked back at the hotel’s security footage, he found out that the security cameras had picked up footage of two men in black walking into the hotel. (The video can be found online. It’s really creepy – I suggest looking it up!)

Unfortunately, most UFO and men in black encounters are first person accounts. It’s not possible to know if they actually have occurred, but judging from the thousands of accounts claiming to have met these men, as well as the similarities in details, these encounters pose a real possibility. With all of the evidence collected over centuries, I have no doubt that aliens exist. And I believe that there could definitely be a government agency working specifically to hide the evidence from the general population. However, I wonder, are the men in black still up in the air, are they real?

Are they humans? Are they employed by the government?

Will we ever know for sure?