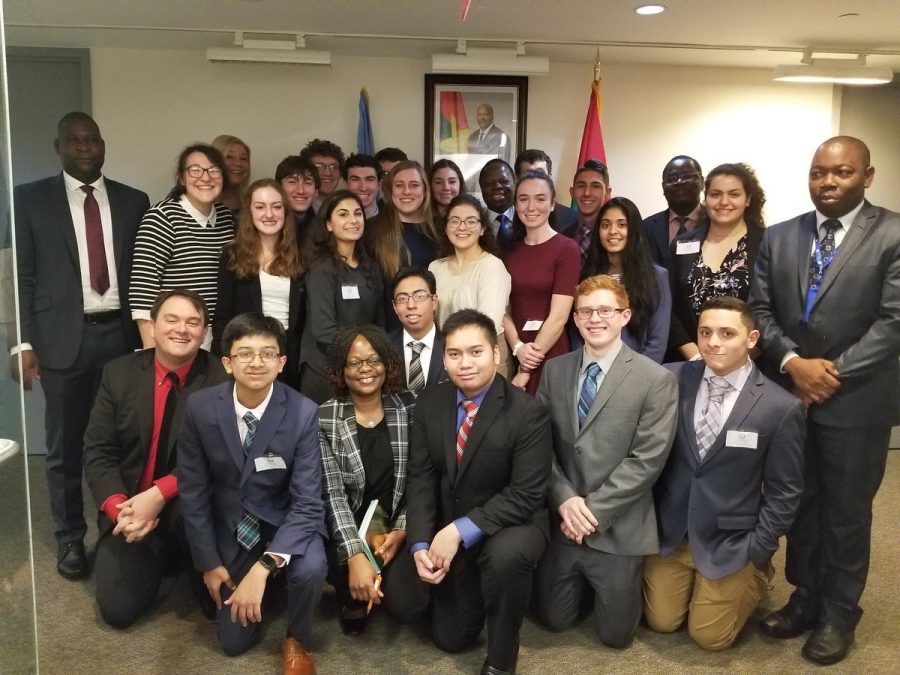 For four days this January, Brewster students in the Model United Nations Club attended the Columbia University Model UN Conference and Exposition in New York City. This event was the seventeenth iteration of CMUNCE, featuring 32 committees and a total of 64 US and international delegations. The students attending the conference enjoyed four days in Times Square and at committee sessions held on the campus of Columbia University. The committees in which students participated where highly diverse, including the Council of King Charles II, the Petrograd Soviet, the Massachusetts Bay Colony, Ivan IV’s court, Taft’s Presidential Cabinet, the Handover of Hong Kong, the House of UN-American Activities Committee, Star Wars, and the 2008 Obama Campaign. Common to all of the committees was their classification as a crisis committee, a designation that speaks to the liveliness and highly variable nature of the debate. As the crisis directors of each committee gave increasingly intense challenges to each committee, delegates had to problem-solve and collaborate to find creative solutions to their committees’ problems.

“This weekend proved to be an eventful conclusion to my experiences at CMUNCE as I aided the Confederacy of Independent Systems in the Clone Wars from the Star Wars universe,” shared a fully-invested Chris McCarthy. “Through conspiracies, betrayals, and backstabs, we proved to be quite creative with our plans to defeat the Republic Senate, but we ultimately failed, and everyone from both sides of our Joint Crisis Committee fell to the hands of Darth Plagueis. Even beyond committee, I will never forget this weekend, the time I spent with my best friends and the time I spent with my new friends that I made. Model UN has really changed my life, and I hope that it continues to change the lives of students in the high school and around the world.”

Through role-playing and friendly competition, students maneuvered the complicated and sometimes harsh political landscape. Erin Renzi explained that, “as member of Rafael Trujillo’s cabinet, I partook in major decision making for the good of the Dominican Republic. Members of the cabinet often switched between supporting Trujillo and hoping to take him down, and at times it was impossible to know my fellow delegates true motives. All in all, each member of the cabinet wanted to improve the current state of the Dominican Republic and we did just that by creating new plans for medical care, border control, and economic security. I learned a lot and had a successful first experience at CMUNCE.”

Yet, as Sarah Borsari first explained, not all outcomes were as fortunate: “While my committee ultimately ended up burning down the Massachusetts Bay Colony and surrendering it to a band of witches, I met some really amazing people and we had a great time working together to combat our rapidly-increasing crisis.”

Outside of the committee sessions, the Brewster delegates enjoyed exploring Times Square, having dinner at 5 Guys, and hanging out in the Marriott Marquis. Students Akshay Gupta, Surpriya Sharma, Jackie Bechara, and Nathan Whitney were given the opportunity to participate in the exciting Midnight Crisis debate at the Marriott Marquis in Times Square, where they faced especially exciting crisis scenarios alongside their fellow delegates. Students were also engaged by the keynote speaker of the conference, Mr. Emmanuel Roux, who has immense experience in Interpol and the French National Police, and is currently head of the Interpol UN Office, a group that faces issues like counter-terrorism and drug trafficking. Mr. Roux explained some of his experiences to students during his keynote address, exploring what it is like to work closely with the United Nations as a leader of an important international organization. In addition, students Chris McCarthy, Autumn Gerard, Supriya Sharma and Jane Scinta were recognized for their exceptional performances at the conference with the awards of Verbal Commendation or Honorable Mention.

Especially memorable was the students’ visit to the Permanent Mission of Burkina Faso to the United Nations. With Burkina Faso, a west African nation currently facing problems such as rural poverty and rising population, students learned about the country over the course of their visit and met the ambassador himself, finding him and his team of diplomats to be both welcoming and informative. It was commonly noted that this was one of the best diplomatic visits Brewster has ever experienced at CMUNCE.

Always an active participant, Victor Diaz shared with us the memory of his experiences this year along with the enthusiasm that he brings every year. “This conference was my 4th and final one. I’ve gone every year of my high school career. It has always gotten better than the last time, and this year was no exception. I played as the Midwest Political Director for the Presidential Campaign for Barack Obama in 2008. I had to inform my committee on many things, from how to develop policy to creating strategies for winning states in the Primary and General Election. Overall, this committee was the best experience I had. I was able to participate in a committee that was full of modern politics (which is something that I love), combined with Model UN and debating ideas of policy from Healthcare to Immigration Reform. It was just amazing, and I wish I could do it again!”

Being a four-time participant, Victor left us with good tidings and well-wishes: “I was proud of everyone who was there, and being my last CMUNCE ever, it was bittersweet: sad to see the end of my storied 4 years of experiences at CMUNCE, but happy to see the many people that are dedicated to this club who will be here for at least one more year, ready to run Model UN at Brewster High School after I leave this June.”

Although each student was in a very different committee, all of the students enjoyed their experiences participating in the Columbia University Model UN Conference and were grateful to have participated in this memorable event.