A Series of Chaotic Events: The Epic Comeback of an In-Person BrewMUNC 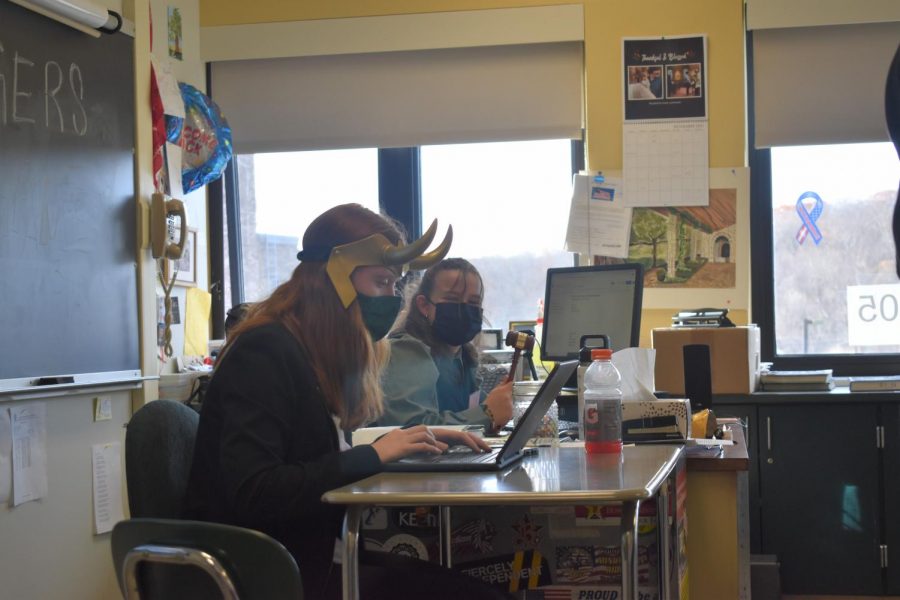 Tax evasion. Communist world domination. Elimination of Thanos’s army by lactose bomb. Many disastrous moments combined to form one of the biggest success stories of not only our high school, but of the county: BrewMUNC V. On Saturday, November 20th, while Area All-State musicians were preparing for concerts in the Performing Arts Center, the Brewster Model United Nations team was hard at work in the library running the only in-person conference in the area since the start of the pandemic. With seven schools participating and about 100 people to manage, with over 90 of those being delegates, it certainly was no small feat. But, as with years past, the results were outstanding and the experiences even better.
The previous conference, which ran this past March, saw staff members work together in-person while delegates participated virtually. Communication was restricted, technology was uncooperative, and committees couldn’t run quickly. The circumstances were less than ideal, leaving room for substantial improvement in the successive conference. “Since we were all in-person, this time, I feel like that was a huge step,” said Dan Ramos, co-Director of Crisis. “I feel like how we organized it and how we were able to take on so many schools – I feel like there was a lot more planning that went into this conference. We did that very well.”
Although the complications of faulty technology were not as monumental this time around, staff members still faced their fair share of challenges: “We overshot the pizzas by a lot. We ordered fifty-five pizzas and that was far, far too many. At the end of the day, we were handing out full boxes,” reported Emily Sullivan, co-Director of Conference. Although part of this overestimate may have occurred in the headcount of delegates, it is mainly due to the fact that many did not end up attending; it was initially expected that 135 delegates would join for BrewMUNC, meaning almost one third of the initial roster was absent. This attendance, or lack thereof, was due to the sickness of a visiting school’s supervisor, which, in times like these, can’t be taken lightly.
Even with a considerable absence of delegates, committees ran very smoothly. In all, five took place, the most of any BrewMUNC to date: The Colombian Drug Trade, Men Who Built America, Avengers: Endgame, An Alternative to World War 1, and the Treaty of Versailles. One of the committees, An Alternative to World War 1, was even created and run by the partnering Model U.N. team of North Salem. Only the second time North Salem has collaborated with Brewster on the conference, staff members have improved in skill significantly, as apparent by the eagerness of delegates to conquer Persia, Norway, and Antarctica. Thanks to all the officers, chairs, crisis teams, advisors, and other staff members who pitched in to make this effort possible, BrewMUNC V was the greatest comeback and most hopeful proof of normalcy in years.
“The fact that they were able to do what they did with half the manpower that we’ve worked with in years prior is a tribute to the fact that they prepared well,” commented Mr. Mullane, long-running advisor of the Model U.N. And, when asked about the pizza debacle, he replied, “We expected a hundred and thirty-five but we got ninety. So, it’s inevitable that we would wind up with extra pizza. Thankfully, NYSSMA and the music department helped us. By eating. As much as possible. Mr. Sanyshyn ate an entire pizza by himself. And that’s what heroes do.”