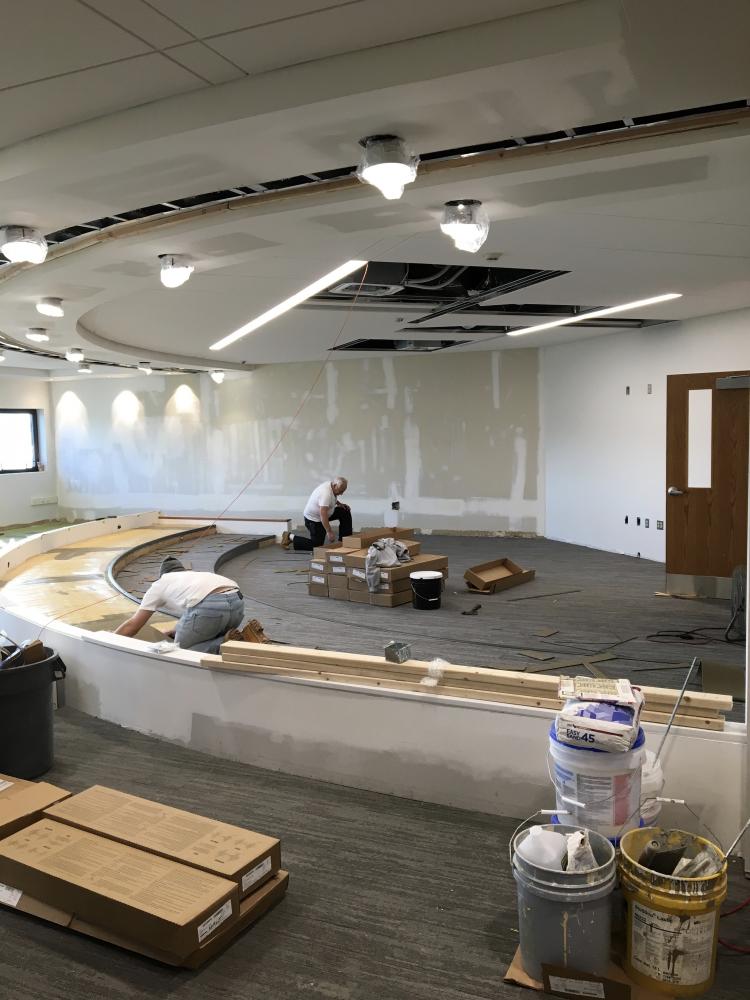 I entered Brewster High School on the first day of the school year in September of 2013, ready to begin my educational journey to my future as an engineer.

BHS is a STEM school, a school that prides itself on preparing its students for concentrations in science, technology, engineering, and mathematics.

But by the time I got there, the high flying BHS had been grounded: they did not offer any engineering courses. They had no Engineering Club, and, to make matters worse, the library and locker rooms were outdated, the classrooms were mostly traditional in structure, and the cafeteria needed an upgrade.

This fall, when I entered BHS on the first day of my senior year, I was so excited to find construction overwhelming the building. Brewster High School was home to a brand new library, refitted locker rooms, two Makerspace classrooms, a remodeled cafeteria, and later in the year, students will receive personal Chromebooks.

The renovation that I was most enthusiastic about touring was the library.  Over the last few years, in many ways, I found the library to be minimally functional. I used it only as a place to finish work in peace or to quickly jump on a computer.

We now have a state of the art library scheduled to open this winter.

I was given access to tour the construction and was awed by the job being done. The skilled crew employed by Triton Construction, is managed by John Hansen.

Fifty percent of the library’s surfaces have been replaced. The flooring has been replaced with new vinyl composition tile and the walls received a bright white finish. The tech room, which previously took up twenty-five percent of the library’s space, was replaced with four group workspaces outfitted with whiteboards and outlets. Each group workspace received energy recovery ventilators which will keep the air clean and remove humidity.

In the middle of the library, students will have access to bar-like seating, appropriate for 1:1 tutoring or technology help.  The library circulation desk will sit directly behind that area with a circular charging station where students may go to recharge all devices. In the back of the library, behind and around the circulation desk, is where all BHS-owned books will be shelved on new millwork units. The area near the windows will house more bar seating which students can use to work at, while behind that are multiple tables set up for collective or individual studying. And along the far wall is a large “graffiti board” for group work and library projections/announcements.   The main portion of the library has been designed with perimeter lighting. Mr. Hansen looks favorably upon the addition of a large U-table centered around a large screen TV.  There is an area that separates two larger group spaces for teachers and students to use as a less formal location.

So Brewster High School had begun taking steps towards levitation, the most basic form of gravitational negation; it is well known that in order to fly, one must negate gravity.

But more was needed. I am proud to say that this year, Brewster High School began taking its steps towards levitation, the most basic form of gravitational negation. The 2016-17 school year marks the first year of a robotics class, taught by Dr. Brittany Kozlenko, and the return of an Engineering Club, led by Mr. Edward Schmidt.

The robotics class has added a level of technological interaction that is so necessary for engineers. While students in AP Calc learn formulas and laws while taking tests, Robotics students require an entrance into the world of tinkering.

Robotics is taught in a kinesthetic classroom where each project channels knowledge of skills that will be useful in a college classroom, but more importantly, in the interactive real worlds of engineering and science. Students in the class have shown proficiency through authentic experiences that accelerate the acquisition of knowledge. They understand practical application of real world objectives ranging from the design of alarm systems to musical instruments.

One of the most intriguing parts of the course is the “Twenty Percent Project.” Students spend twenty percent of their class time (generally Fridays) planning and eventually constructing projects that will improve the quality of life at Brewster High School. This involves students directly in the real-life application of information. This is what satisfies the STEM student and provides students with an inside look at demand within engineering fields.

Upon entering high school in 2013, I knew I wanted to become an engineer. But I was frustrated by the lack of engineering programs or clubs I could join.  I had no academic option to enroll in any classes that would allow me to tinker or build explicitly. Brewster was grounded.

But after so many years without it, the Engineering Club is back. We began by working on casting metal objects of our design.  The exploration of engineering consists of taking real life situations and exploring solutions.

On December 1, we studied how to increase the flow of water through a well by changing the water path, as well as the size and material of the tubes. We are scheduled, as a group, to tour the library in order to gain information on the engineering aspects of big projects.  As president of the Engineering Club, I am pushing our group to look for competitions, including a solar car challenge, so that we can enter inter-scholastic challenges.  We are planning to make a shirt dispenser for Mrs. Chalmers. The plan is to enable Mrs. Chalmers to propel shirts into the sports crowds at Brewster sports events.

The physical and educational evolution that the high school is undergoing shows Brewster’s progress toward levitation. However, BHS will never soar until the mechanical classes that once taught students how to engineer projects are returned.  This could be achieved by transforming a classroom into a mechanical shop; a mechanical Makerspace with white-boards, work benches, and mechanical tools including a 3D printer. As all students are expected shortly to receive their own devices, perhaps a former computer lab could be converted to house the mechanical space. It could be used for the Robotics class, as well as by the Engineering Club to build projects that are currently restricted because of a lack of space and technology. With the addition of a mechanical space, Brewster High School would quickly gain respect as the exemplary STEM school it is so clearly on its way to being.