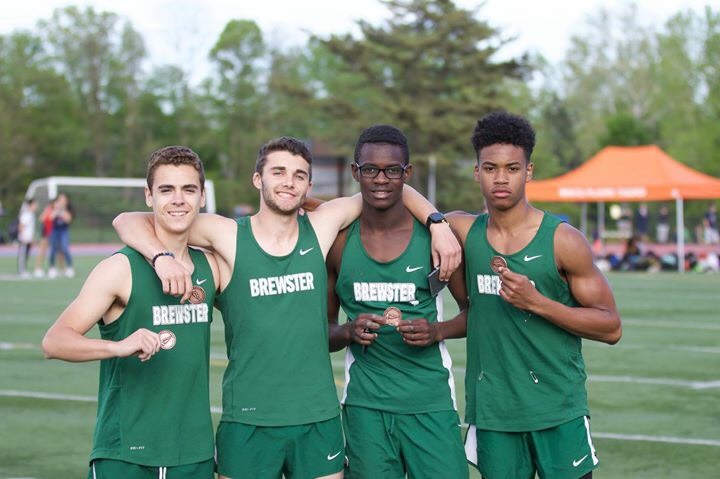 We had many great performances throughout our season, which included 7th grader Patrick Ford running a 4:58 mile, which was the fastest mile in New York at the time. To add to that, at the Somers Invitational, we had three runners medal in the 400: Ryan Lenahan, David Alade and Jason Whitehead, who placed 1st, 2nd and 4th, respectively. At the same meet, three Brewster runners ran under 10:30 in the two mile. These runners were: Ryan Neubauer, Josh Herman and Patrick Ford – with Ford’s time of 10:28 being the 3rd fastest in the nation!

At the prestigious Loucks Games, we had many teammates get on the podium. A team of David Alade, Danny Jafa, Jason Whitehead and Ian Wong came in second in their Freshman-Sophomore 4×400 relay. The next day in the Varsity 4×400 relay, the team of Ryan Lenahan, Geo Zanetti, David Alade, and Jason Whitehead came in 5th. On the following day, the guys 4×800 relay came in 5th overall which earned another medal. We then continued into the Northern County meet where Erik Jacobsen won the steeplechase and earned All-County while Ryan Lenahan came in second in the 400, which also earned him All-County.

The season might almost be over, but we have two meets left – many guys are still trying to improve their times at the Class B championships and the State-Qualifier meet in the coming weeks. We’ve had a couple athletes qualify for the State-Qualifier meet already, including Ryan Lenahan and Erik Jacobsen. Ryan Lenahan will be running for a school record in the 400 and trying to qualify for the State meet, while Erik Jacobsen is running the steeplechase.

The season started a little late for us due to cold weather and even some dustings of snow. It took us awhile to get out on a field, as we spent most of our time in the gymnasium hitting in the cages and throwing off of astroturf mounds. Every game we played, win or lose, was hard fought, and we battled all the way through. We have a tough, respectable group of players who have bonded a lot, especially during our spring break trip to Florida. We finished our season with a 10 win and 10 loss record. We plan on continuing our season through sectionals and taking another shot at the Championship.

We are going into Sectionals with the 17th seed and will play Saunders HS first round. Last time we played against Saunders, we won 12-1 at their field. We plan on going back and defeating them again. Following that game, we play against 1 seed Rye. The odds may be considered against us, but our team goal is to beat them and move on to the next round and eventually win the title.

The season was one of growth for the tennis team. With many new faces this year, it was a serious rebuilding project. We started out the season with an incredibly small team, which means we started with a lot of work to do. All our new faces this year showed lots of promise, and were able to perform incredibly admirably in their roles, with many thanks to team captain David DiMinno. 2nd Singles Victor Diaz was able to show an impressive display of Grit and sportsmanship. Another notable mention would be that of 2nd singles players Edward Monges and Gian Cercena, who were able to become the first All-League tennis players in years.

We hope that in the coming years, our players will stay committed to the sport. With enough dedication, we could have an extremely competitive tennis team. It is our hope that our players will put in some work during the off season and have an above 500 season next year!

Clarissa Cuomo broke the school record in pole vault jumping 9’6”. Elsa Neubauer had a huge season best with in the 1500 meters, she ran 4:50.6, she placed 3rd. Marissa Crowley improved her 800 meter race by running 2:22.6. Keegan O’Connor placed 5th in the pentathlon. Nicole Olszewski tied her personal best in high jump by jumping 4’10”.

Now that Spring Track is over, the girls have to start preparing themselves for the most demanding sport; Cross Country. These girls need to make sure that they are mentally and physically capable for this demanding sport. We are beyond excited to see what these girls will do in the fall, and we know that they will continue to surprise themselves, as we never met a group of girls who are so determined and passionate about this sport. These girls want it and this season, definitely should be to watch.

We won our League. Beating John Jay in the regular season. Our trip to Boston and all the team bonding. Hoping to go all the way and win Sectionals.

This season started later than expected with wintry conditions in the forecast throughout the month of March. At the start of the season, only three Varsity players remained (Louis Martin, Gavin Winkler, and Chris McCarthy), meaning there would be plenty of opportunity for younger players to improve and experience match play. With a slow start, we began to come along towards the middle and end of the season, when our team began to feel more confident in our play. Tyler Maloney, Jackson Mahoney, Alek Reichelt, and Aidan Strahley were four players who saw improvement in their scores by 10-20 strokes. Gavin Winkler saw consistency in his play with the best averaged score on the team, helping to carry our team to some wins. Our seniors, Louis Martin and Chris McCarthy, also saw more consistency in their play. While their golf scores proved consistent, these two also carried the role of being leaders on the team to younger players in helping them improve their play.

Our expectations looking forward, are to improve not only as players but as a team. Our leaders should take guidance in our younger teams play in order to help improve their golf scores. The golf team thanks Mr. Nicastro and Mr. Nelligan for a great golf season.

The beginning of our season started off a little rough. We still were getting used to playing as a team, since we only had 6 returners from last year. A season highlight was when we beat Mahopac in a 3-2 game. They are a really good team, and we played really well against them, so it was an awesome win. Other great wins were against Somers and Walter Panas.

We just played our first game to get into Sectionals against Yonkers, and beat them 17-0. Our next game is against the #1 seed Tappan. We played them at the beginning of the season and lost to them, but we are really looking forward to playing them again. We are the underdogs (being the 16th seed) in this game, so it would be really exciting to give them an upset and get to continue playing in Sectionals.