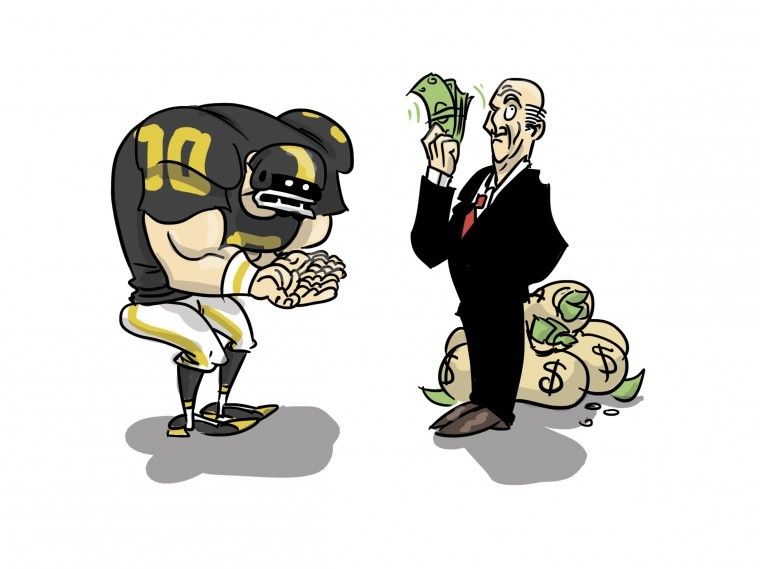 Since most Division 1 college athletes are getting athletic scholarships, they should not be given additional money. Getting scholarship money is the only reward that the student athletes should receive.
This is ludicrous.

College athletes bring in a lot of revenue to their schools. There should be a percentage system in place from the number of people that attend the game, to the amount of money the players make. Obviously, the more popular sports such as football or basketball draw bigger crowds. With those bigger audiences, the players on those teams should make the most money.

Some college athletes have situations at home where going pro just makes financial sense for them and their families. Between playing sports and going to school, these student athletes have no time to hold jobs and earn income; playing the sport is their job and must be their sources of income. By paying these athletes, they would be more inclined to stay all four years.

If college players stayed all four years, the level of competition would rise dramatically. Throughout the 80’s, college basketball players regularly stayed all four years, and the level of competitiveness was at an all-time high. There were rivalries established between players. Paying the athletes does more than create more competitive players, but by creating the incentive for athletes to stay, the NCAA would make more money. More spectators would turn on the game, buy tickets, and buy fan gear, and as a result, the price of air time would increase. It’s a win-win situation for everyone.

The average professional basketball career length is 4.8 years; the average length of a professional football player’s career is roughly 2 years. These athletes have a good percentage of their lives left ahead of them, undecided and uncommitted, with as little support as one year of college education to get them jobs. A large number of professional athletes are going broke. If these athletes were provided some income during college, they wouldn’t feel so rushed to leave and would be more likely to graduate with their degrees.