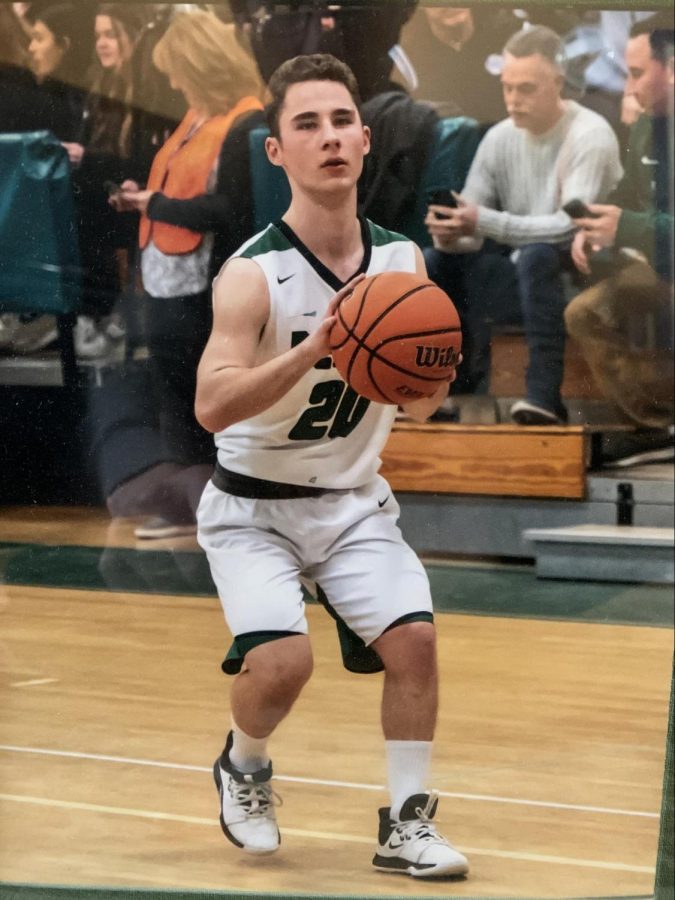 I still cannot believe, to this very day, that I have played my final basketball game in my Brewster career. I remember being a young kid and going to my Southeast Recreation games, to playing AAU Basketball for Lightning, to finally playing for the school starting in 7th grade.

Forward to February 12th, 2020, 6:30 PM at the gym in Brewster High School. Senior Night, the final home game, the final game of my Brewster basketball career. The energy in the gym is palpable from the moment I step onto the floor for warm-ups. I have never felt this way before: nerves, excitement, and sadness came over me as I think about the fact that this will be my last game.

The ceremony begins by recognizing the three seniors on the team: Paul Catalano, Nick Girard, and myself. Walking out to hear my name being announced, to witnessing the crowd cheering, to the signs all around the gym made for me, to seeing my friends wearing old jerseys of mine, to finally walking out to see the faces of my family: it’s all so much. I present my mom with flowers, and in hugging my mom, brother and father, I am brought to tears. My family has always been my greatest supporters. It has been that way for my entire life, and I know that will never change.

It’s game time; all my emotions need to be put aside. It’s time to focus.

Paul, Nick and I, the captains of the team, meet up with the refs in the center of the hardwood to discuss the rules one last time. The jump goes up, and the game begins. The 1st quarter is intense: all three seniors started. No one scores for the first two minutes into the game. I can tell that the crowd is getting anxious for a basket. Finally, Brewster scores the first two points!

But for the next three quarters, Walter Panas just keeps scoring, and we can’t seem to stop them. And then it is the 4th quarter, the final quarter of the game, the final quarter of my Brewster career. I am focused, locked in for the game; for the last six minutes, I will play high school basketball. And then something comes over me and I decide to have fun. In the last six minutes of the 4th quarter, a big smile crosses my face. I am having fun, trying to make every last second count. I run up and down the floor. I feel like a little kid having fun and shooting baskets. I hit a pull-up jump-shot from the right elbow to give me my only basket of the game, and the final basket of my Brewster career. It is ironic that I hit the shot because that is exactly how I started my Brewster career:

Then Coach Nelligan pulls all three of us out of the game at thirty-second intervals apart, and as he does this, each of us gets a standing ovation. With around two and a half minutes left in the game, Paul gets called out. About a half-minute later, I get called out to the loudest crowd cheer I have ever heard in my life. I am walking on air. I hug my coaches and high five my teammates.

Then Nick is called out, closing out the three seniors’ careers.

About two weeks later, Brewster holds its Winter Sports Awards ceremony where Paul and I win the awards for the team. It is a heartfelt way to end.

And my Last Dance at Brewster is done, but to this day, I still remember every play of that game against Panas. It is something I will never forget.