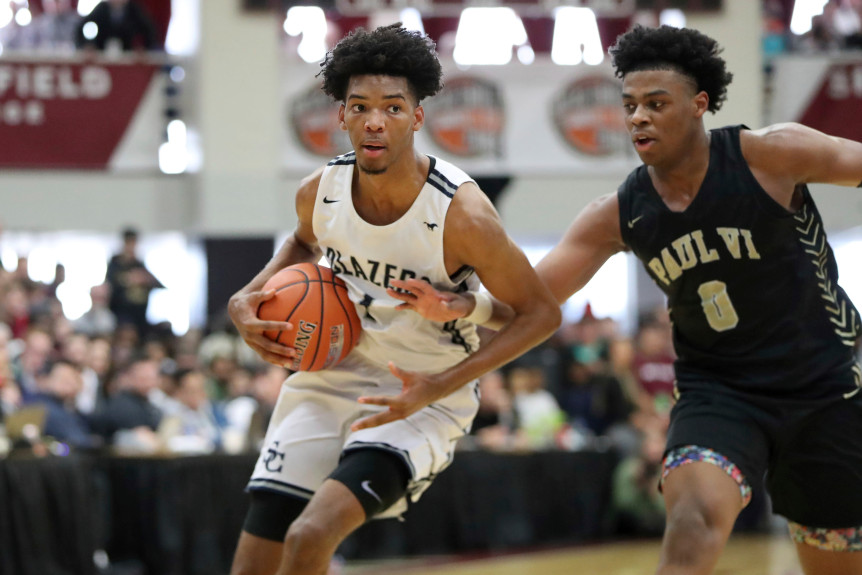 With great coverage and a palpable electric charge in the house, Sierra Canyon’s Ziaire Williams #1 drives against Paul VI at the Hoophall Classic on January 20, 2020, in Springfield, MA., one of many exciting high school games available thanks to growing interest and expanding technology. (AP Photo/Gregory Payan)

The atmosphere and volume have heated up, everyone in the bleachers has stood up at once like soldiers.

“Where is he?” I hear one teen ask behind me.

“Don’t know, can’t see him,” answered the other.

We look out into the sea of mobile phones. “There he is!” I call out, “With the beanie.” Flashes ensue.

Who was I talking about? LeBron James, of course. The King had entered Blake Arena at Springfield College to watch his son Bronny play with the Sierra Canyon Trailblazers in their culminating match of the 2020 HoopHall Classic (an annual event that features the top high school players and teams from around the country). The Trailblazers are playing against Paul VI Catholic High School out of Fairfax, VA.

But enough about LeBron: we hear about him from every sports page/network event.

Does anyone remember a time when a single ankle-breaker or game-winning shot could be spread either by word-of-mouth or newspaper article? Anyone remember going to their local version of “the big game” or begging their parents to stay up a little past their bedtime to watch the playoffs? Or even better, remember being able to talk about the event with your friends the next day? Now take today’s world of social media and high-speed internet and crank that pace up by a thousand: that’s how fast you can hear about a highlight that has just occurred.
Social media might have been one of the best things for high school basketball in terms of creating the basketball celebrities of tomorrow. Consider the many basketball websites such as BallIsLife, Overtime, and the many others in the online world.

Just by going on YouTube and searching one of the channels mentioned above you could be watching someone playing high school basketball on the other side of the country.
High School Recruiting Basketball lists appear on platforms such as ESPN, 247sports, and Rivals. These websites give recruits attention on the Interwebs as well as giving different players the responsibility of recording at their games for content to add to their platforms. The constantly revolving platform of information never stops spinning.

While videos have gotten attention over the years, it seems that this year the hype has risen to a new level. Consider the attention Sierra Canyon has gotten with both Bronny James and Zaire Wade (sons of former teammates and good friends Dwayne Wade and LeBron James) joining as freshmen. When the Trailblazers’ season schedule was released, the basketball world learned that Sierra Canyon would be featured on various ESPN networks for fifteen appearances! Sure, you could say that it’s only because of James and Wade, but imagine further that you were playing high school basketball and found yourself being broadcast on ESPN.

Shortly following my acceptance to Springfield College, I was invited to attend the 2020 HoopHall Classic as a part of being accepted to their Communications/Sports Journalism program. And on MLK Monday, 2020, I had the pleasure of watching Sierra Canyon play, along with the hype they brought with them from the LA neighborhood of Chatsworth.

After watching the first half of another game prior to the main event (which featured Evan Mobley, one of the top players of the 2020 class) and a quick lunch break, we slowly made our way over to Blake Arena to watch Paul VI High School vs. Sierra Canyon.

We were told that we would have VIP seating for the game, but some miscommunication left us with a standing-room spot on the second floor. While I quietly poked fun at the VIP seating, both teams came running out of the tunnels for warm-ups.

The place was packed to the brim with spectators, journalists, and camera crews (Oh My!) – all there for the game that would go live on ESPNU at 1:00 PM Eastern.
The crowd gave Sierra Canyon an electric hometown welcome, which made me wonder if I was in Los Angeles. It was the closest feel to an NBA game that I have felt in my life, although I’ve never actually attended an NBA game.

At the start of the year, I recognized the hype for some of these elite high school basketball players and teams, but I had never fully experienced it. But that game made me understand why it has captured the hearts and the attention, more and more, of the masses.