Fall Sports Recap The Successes, the Struggles, and the Sweat 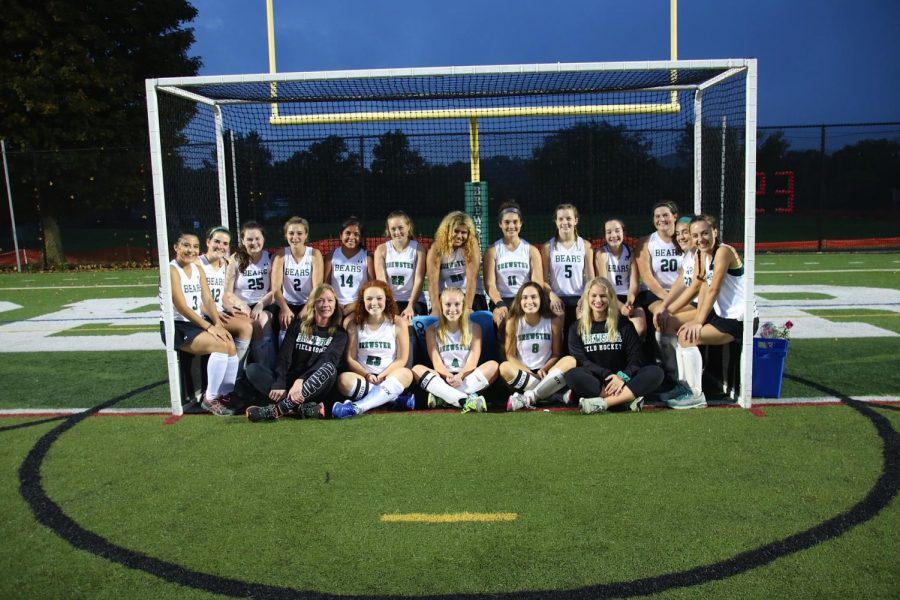 Season’s highlights included celebrating seniors on Senior Night and the Homecoming performance. Coming up, the squad is looking forward to competing and succeeding in competitions in the winter season.

The team won the Somers Invitational, Six Flags Wild Safari Invitational, the 41st Annual Brewster Bear Invitational, and the League Championships. They were the only team in Brewster to come home with a league title this fall. This year the group became really close as a team, which contributed to their success. Eighth grader Patrick Ford was the fourth individual qualifier for the New York State Championships and the only qualifier from Brewster this year. At this race, he finished 44th out of 114 runners in Class B. Next year, the team is losing four seniors, two of whom were varsity runners. Luckily they have a really young team, so they will return stronger and even more competitive next season. They aspire to have more state qualifiers in the years to come and are striving to win the County and State Qualifier meets as a team.

Dance Team successfully performed at all football games with two brand new dances choreographed by senior captains Jenna Pinzur and Erica Caruso and junior co-captain Nicole Olszewski. They also performed at the pep rally, and featured some senior boys who graciously learned the choreography, and for the first time ever, our seniors celebrated their upcoming graduation side-by-side with the senior football players and cheerleaders. Dance Team is looking forward to two performances on November 19th and 20th at the Barclays Center in Brooklyn for the NCAA basketball tournament. This will be a televised event and a huge opportunity for Dance Team to share their talent beyond Brewster on a much larger scale.

Honorable All-League went to Ashley Goodlife, Olivia Morini, Gabby Fragliossi and Meaghan Feehan. All-League went to Danielle Heintz,
All-Elite went to Brianna Sayegh and Colleen Stapleton. Finally, after 7 years of losing against Walter Panas, the team beat them on their own senior night. As long-time rivals, this event was the best highlight the team had throughout the season. Losing 3 seniors this year will be a huge loss for next year. Looking forward, with 14 returning varsity players, the group will have great leadership to shape the team and put out a strong season.

Nick Gonch and Mark Delgado were each selected to play on the North Team in the High School All-Star game. They won 42-20 against the South. Next season, the new team will be reuniting an undefeated team from two years ago. They will be a solid team and a tough opponent against the rest of Section 1.

For the first time in boys soccer history, the team beat Somers by a score of 1-0. Pat Feehan scored with 8 seconds left to clinch the win. The team also tied for second in their league which featured three of the top six teams in the section. Other signature wins include beating Nyack 2-0, Mahopac 5-1, and Lakeland 2-0. Looking forward, eight starters and a total of ten seniors will graduate this year, leaving about half the team returning. The underclassmen will have to step up to have a successful season next year.

The highlight of our season came from the team’s win over Lakeland, a rival that has beaten them many years in a row. Every player on the field had some moment when they stood out. Gabby Jakobsen scored a perfect goal on a free kick and Jocelyn Duran and Brianna Castle put us ahead with two more goals. Angie Rappa, Sofia Leggio, Emma Winkler and Sadie May Fisher Diotte acted as a defensive wall against oncoming offensive attacks. Amanda Sherman kept control of the ball in the midfield and players new to the team such as Rory Charbonneau, Lili Verrasto, and Jillian Derose contributed to the team win. The team beat Lakeland 3-2 in a hard-fought comeback. Brianna Castle earned All-Section Honorable Mention and All-League and Elly Keefe earned All-League. Looking forward, it’s a young team and a new coach. Every year they seem to improve tremendously, and there’s no reason to believe next year won’t be the same. Slowly but surely, they are becoming a notable competitor within their league. Coach Fratto is very dedicated and determined to grow the program.

The team had a fundraiser for the local shelter in Brewster where they raised $1,200. Two of the players were invited to the Conference Tournament: Mia Palladino (8th grade) and Lauren Knorr (12th grade). The group can’t wait for next season and look forward to having new members join the team!

With a tough season, the team players improved immensely throughout it. The practices held during the week allowed them to come together and work on their mistakes. They provided feedback and motivated each other to keep pushing and trying to be the best players on the court. Their focus was coming together as a team and trusting one another when they stepped on the court. Despite the bumps the team faced along the road, they held their own. The members walked into each gym like a team and left like one, too. No matter what happened on the court, the team was really good at picking each other up. With that, expectations for next season is to keep up positivity and sportsmanship knowing it makes them stronger and work harder for future games.