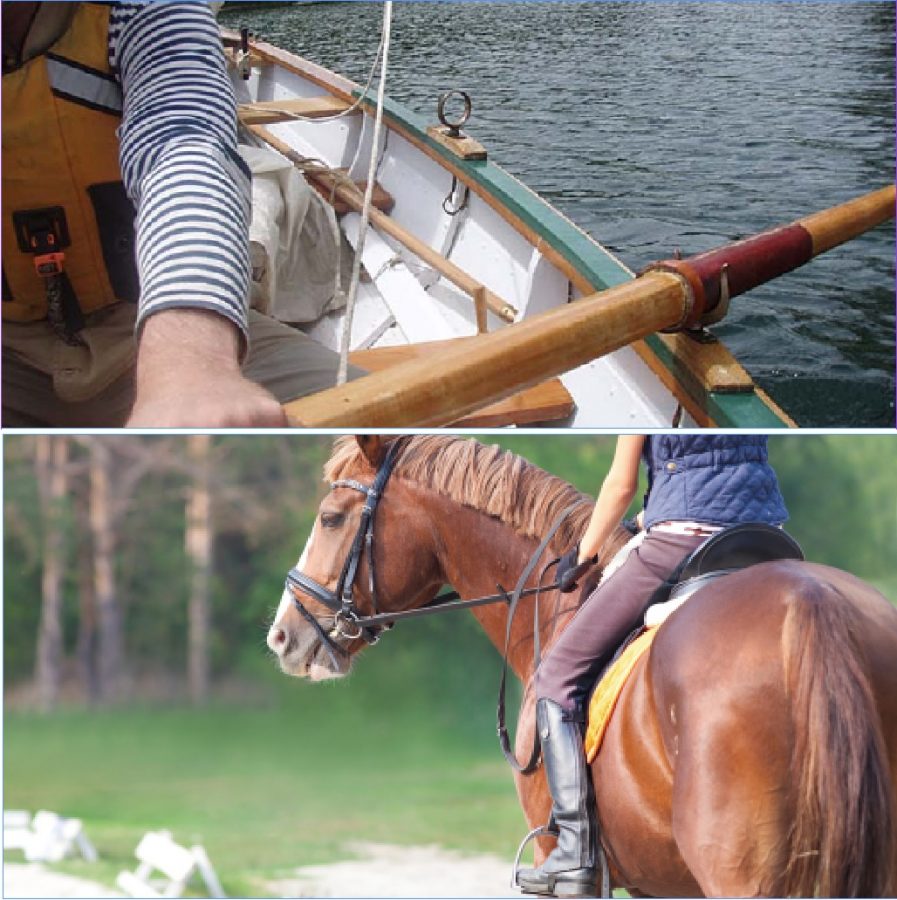 With college approaching for many, Bear Facts take a moment to celebrate those who focused their college essays on their athletic passions.

The High Price of Dedication
by Nina Shilling

It wasn’t the first night I had come home like this. My jeans dotted with grease stains, messy hair, the unmistakeable smell of garlic woven into my shirt, the treads of my sneakers filled with tomato sauce. My car suffered too; receipts thrown around, spilled soup on the back seat, and that smell – that hot, steamy, cheesy, pizza smell…

I had spent five hours navigating the back roads of Westchester County with the company of my favorite playlist blasting and Siri’s voice guiding me through the dark. It was a quirky job, and within five hours I had delivered pizzas to a handful of very different homes and people. There was the busy babysitter, the giggling sleepover girls, the dad who had been left at home alone with the kids for the weekend, the tired newlyweds doing construction on their new home, the old man in his plaid pajamas. Being a five foot tall, sixteen-year-old delivery girl, I had some memorable greetings at the front door.

“Hey, do you want to come in?” Stranger danger, no thanks.

My all-time favorite was being invited to stay and party with the local high school football team. (I almost said yes to this one.)

At first, it wasn’t a bad job, driving around in my car listening to music. Plus, it was a little exciting to see what kind of person would appear at the door next. And the pay was good – on an average night I made $100, much higher than a typical minimum-wage job. Most people were nice, and sometimes I’d deliver to the sweet spots, the handful of homes that tipped ten dollars or more!

But this was the night I cried, the night I stood in the shower, hot water drops rolling over my face. I’m not an emotionally dramatic person, but this was a scene straight out of a movie. This was the exact moment I realized the job wasn’t worth it. On weekends I came home way too tired, because I wasn’t just a delivery girl, I was a full-time working student. And during that hot shower, that night in November, I realized there was nothing I loved about delivering pizzas.

The one thing I loved in my life was horses.

I work up to ten hours straight at the barn, riding, doing chores, feeding, scrubbing buckets, teaching lessons, cleaning tack. The hours I spend working go toward paying for my horse, an expensive sport to say the least. I work every day, in every season, during every week of the year. I do this to pay off the significant monthly expenses.

Since I was five, I’ve been on the back of a horse. I had a naughty pony growing up, some weeks I was on the ground more than I was on his back, but I got back on to be a better rider. Years of experiences spent riding young horses, schooling naughty ponies, and taking any opportunity in the saddle, have provided me with many chances to ride amazing competition horses and even to train with Olympians.

I’ve learned that nothing comes without dedication.

I’ve pulled all-nighters to prepare clients’ horses (and my own) for horse shows; late nights after school body clipping until eleven PM, waking at three AM to braid for a competition. Yet, not once had I come home crying.

That November night in the shower, I realized that doing anything I didn’t love took away from what I did love. There is no time to waste, only time to use, and that is exactly what I intend to do.

Nature: the Mother of All Inventions
by Ian Strahley

It was going to be a good day. We had envisioned a day full of sun, laughs, snacks, music, and fish. But as my friend Dylan and I spent a few hours on my old crooked row boat, our expectations plummeted.

What had seemed like a tranquil day on the water had transformed into a sailor’s nightmare. The winds picked up without notice, carrying us to the opposite end of the lake. We drifted farther and farther from our way back home. As no fish were being hooked, the day’s goal had shifted from enjoyment to escape.

Too late, we realized how far our boat truly was. Nature’s force was unbearable, pushing us farther from our goal, and our hope. The wind was a boa constrictor, the harder we fought, the harder it tightened its clutch. We struggled, rowing against the powerful wind and made no progress. As rain began to soak our clothes and rust our fishing equipment, we finally caved. It was futile to brawl with nature; there was no possibility two seventeen year-olds could overcome it. We needed to come up with a solution – fast.

“Row towards those rocks! I have an idea!” I shouted, trying to fight the sound of raindrops pelting us like bullets. Dylan nodded. I knew we had to be careful because if the boat scraped the jagged edge of a rock, we would be in a lot more trouble. With much struggle, Dylan and I closed in on the protruding shards.

I spied what I was hoping to see, and leaned way over the edge of the boat, nearly falling into the murky water. I reached deep into the water, hanging on only by my feet, and used all my might to pull out a rock twice the size of my head.

“Not a rock, Dylan. An anchor.” I quickly reeled off about fifteen feet of line from my pole and fastened it to the rock. Every second I spent fashioning my primitive anchor, the farther the wind shoved us in the wrong direction. Doubt crept into the back of my mind, telling me the rock was too small; that my knot wasn’t tight enough; that this was all a waste of time and effort.

We pushed back into the deeper water and back into our ongoing battle with the winds, but my plan and my anchor were ready. Once I thought we were in at least fifteen feet of water, I dropped the anchor. It hit the surface with a splash of hope. The slack jumped from my hands and dove after the rock into the lake below. Was the rock heavy enough? Was the knot tight enough? Was the line long enough? I knew the answer to each question was, yes. I had faith in my idea and my skills.

The line stopped diving and I gave it a tug. The rock was still attached. Dylan and I sat there, exhausted, soaked, and relieved. The anchor had worked. Nature could no longer push us around. We waited out the grueling storm, as it took two minutes for the rain to stop, and all of “Hotel California” for the wind to die down. It was then possible to leisurely row to the dock and disembark from the nightmare.

As we walked home, dripping wet, I thought of what the day was supposed to be, and what it eventually became. I thought of how I was able to save the chance of enjoyment by problem solving and by being creative just in the nick of time. I thought of all the times I’ve used these skills in the past. I thought of the treehouse I built for my younger brothers, the roach farm I created to feed my bearded dragons, and now, an addition: an emergency rock anchor. The inevitability of my future hit me: engineering.