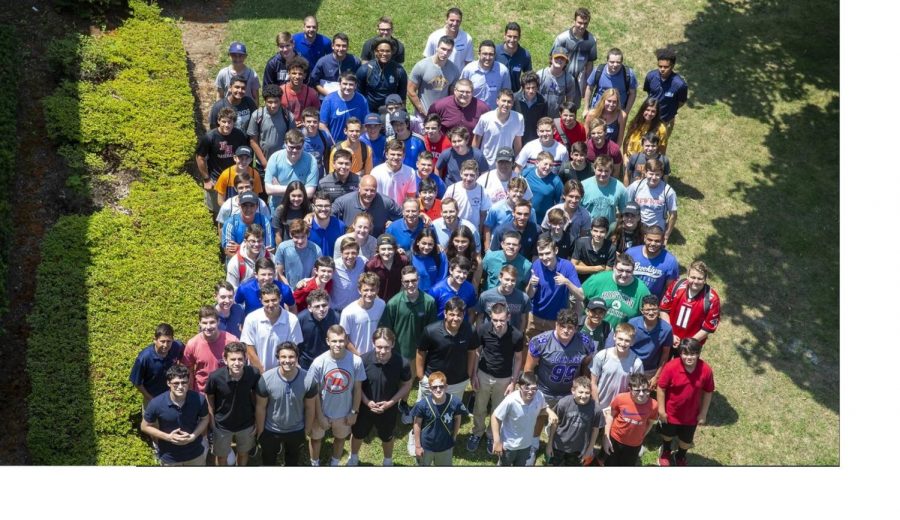 Lost in a crowd? Not this writer! Spotted bottom left, Kyle distinguishes himself whenever he can, which includes improving as a sports broadcaster this summer.

Last year, I wrote an article on the Rookie Portion of the Bruce Beck Broadcasting Camp. This past summer I went back to the Veteran Camp and I’m safe to say that it blew me away. It was a complete 180 from the Rookie Camp but in a good way. The main teacher at the Veteran camp was sports personality Mike Quick. The camp was moved to Iona College in New Rochelle where there were multiple rooms to do some of the assignments, while we did others at MetLife Stadium and more at LMCTV in Larchmont, Mamaroneck.

This week was very intense in the way that we had a lot to accomplish in a short amount of time. For the first 30 minutes, we were handed out a book’s worth of papers related to this week’s assignments (seven in total). Considering I did not know what to expect coming into the Veteran Camp, this was a shock. The assignments included a commentary that we would read off of a teleprompter, a breaking news story, an interview, a PTI (Pardon The Interruption) Segment, a Sportscast, and a Knicks Radio PBP (Play-by-Play) that lasted 6 minutes. These all involved prep work that had to be done mostly on our own time. (Yes, we had homework for this summer camp.)

Another little add on was the guest speakers that we had during that Monday and Tuesday. There were only three guest speakers this week compared to last year where they threw multiple guest speakers at us each day. The speakers included Mike Breen (MSG, ABC), Ian Eagle (CBS, TNT, YES), and Joe Tessitore (MNF, ABC, ESPN). Some groups got lucky and they were able to have either Ian Eagle or Joe Tessitore as guests for their podcast. My group was not as lucky, but we still had fun on our own.
Tuesday was where we began the “doing” part of the actual assignments. First up for us was the commentary, which we emailed to the staff after some revisions with Quick. I truly believed that this was one of my highlights from the week, as I performed well in front of the camera. After that, I hopped into the podcast room with my partner where we talked about sports, sports, and more sports.

Wednesday was at MetLife Stadium and that came two more assignments and additional prep on the bus to and back from MetLife. (We were constantly working, not in a bad way, but there was little if any time for breaks which I was fine with.) These assignments included the interview with a former player (this year I had former NYG Shaun O’Hara) and a Breaking News Sports Stand-Up (I talked about Russell Westbrook being traded to the Houston Rockets). For the Breaking News standup, we had to write it ourselves and many of my fellow campers had fun with coming up with their own ideas. (For example, one idea was Saquon Barkley being traded to the Dallas Cowboys for two sixth-round picks while another was Frank Ntilikina winning the NBA MVP.)

Thursday started the first of two days that would be at LMCTV. During these days there would be three assignments that would span the two days that we were there. First, that day was the PTI segment. We kept the same partners that we had for the podcast for the PTI segment as well as the Knicks Radio PBP that happened on Friday. One cool experience gained from the PTI segment and the Sportscast later in the day was that we got to wear an earpiece where the producer (in this case Mike) would tell us commands about what would happen next. The first time having it in place was weird as there was someone talking to you while you were trying to do a segment, but by the end of the day, I got used to it. The second project of the day was a solo sportscast that was on our own with the earpiece. I felt that I really shined through in the commentary compared to having a rocky Wednesday and a so-so PTI segment.

On Friday, the rest of the campers finished up their sportscast. (There was not enough time for all 38 of the campers to do their sportscasts, so after about 20-25, the rest went on Friday to begin the day.) Before we got to start on the Knicks Radio PBP, a talent representation agent Nick LoPinto showed up at the studio and gave a few words about the industry itself. Nick is with the Montag Group who represents Bob Costas, Ian Eagle, and Dick Vitale, to name a few examples. This was the first time that they had brought in an actual talent scout to the camp, and it was really neat to hear from someone that works with a group that represents other broadcasters that are seen on TV frequently. To finish off the day, we did the Radio PBP of a Knicks v Bucks game at MSG. The prep for it wasn’t as bad as I thought, as we only had to focus on the starters for each team for the first six minutes of the game. My partner and I split the PBP and Color Commentary Roles halfway through the broadcast, and for guidance, we had the Radio Voice of the Knicks Ed Cohen give us pointers once we were done.

Closing it up, this was an amazing week with amazing people in an amazing environment. There was little to no negativity, and I was able to bond with many of my fellow campers over our passion for sports as well as broadcasting. I learned a good amount from this week that included advice, how to get through hardships, and overall how to work towards my dreams.