A Soccer Season of Loss – An Injurious Tale 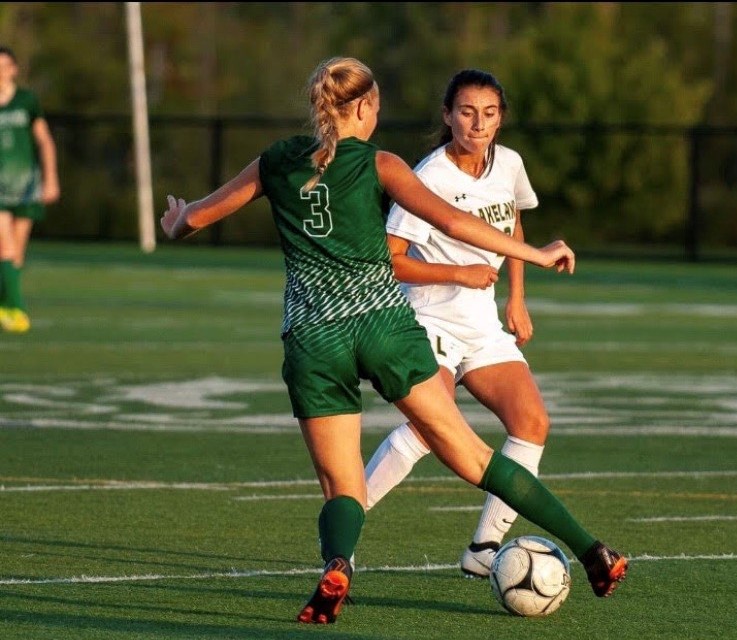 Soccer player Gabriela Jakobsen (3) outmaneuvers a rival for control of the ball during her last playing season.

Following the annual captain speech, our eyes locked through the row of girls in front of me, and in that second I knew the captain band was mine. My competitive grin cracked through; naturally my arm reached for it with a sigh of relief, and all of my worries escaped my body only to flood back into me.

Coach was looking directly behind me, not at me. An arm brushed over my shoulders reaching for the most wanted piece of fabric on the team. The Velcro strap with letters carefully stitched into the white and black stripes was a privilege to wear, but to me, it was so much more than that. She secured the title that I fantasized about since my freshman year. My arm dropped out of embarrassment and my confident posture quickly turned to a slouch. I reached for my blonde braid, something I only do when I want to argue but can’t.

My mom always says I need to bite my tongue because my attitude will get me in trouble one day, but this day I was in no mood to fight. Zoning into the grass field that carried my blood, sweat, and soon, tears, I continued fiddling with my dead ends. The field that first taught me how to shoot a ball, the same technique I used to hit the upper 90 goal to beat Lakeland. The field I was always on 15 minutes early to help set up warm-ups. And now the field where a long time aspiration of mine was destroyed.

How could he not make me captain?

Variations of I’ve worked hard for this, and I deserve this, kept replaying in my flustered mind until the clapping of surrounding players snapped me out of it. Still looking down, I managed to turn around with a forced smile to squeeze out, “Congratulations.” The team lined up behind the new captains to lead warm-ups. A familiar hand squeezed my shoulder from behind, “You will get it next season.” Facing my best friend, I knew looking at her would humble me. This time I let a more genuine smile show before catching up with the rest of the team. Next season became my new motto.

Hours of practice and dozens of games went by and the next season was approaching. The only difference was instead of center back, I’d be playing left bench with two crutches taking the pressure off of my surgically repaired meniscus. I always envisioned that if I had an injury that required surgery it would be from a glorious slide tackle, like Julie Ertz in the World Cup. Unfortunately for me, it happened rolling off of a bench rusting in a sweat-soaked weight room, while my friends laughed at me. Originally I didn’t qualify for captain, and now I wasn’t even qualified to play.

With my senior year in play, next season was no longer in the realm of possibility. Forced to watch my favorite team play from outside of the painted bounds that once held me, it was clear that the shiny band with seven letters was merely fabric. The team was holding their heads low, down one goal against Walter Panas and there was nothing more that I wanted then to jump in there and help.

Instead, I communicated as if I was out there, encouraging the girls and guiding the young players on positioning and attacking. Shouting louder than the announcer, I saw the girls look at me for guidance on the field. Their heads lifted along with their drive to score and I finally realized something. I wasn’t the captain but I was a leader, and the band I craved so badly last season didn’t determine that. The real privilege came when I stopped wishing for the band to hug my arm but instead, to conduct myself as if it was.