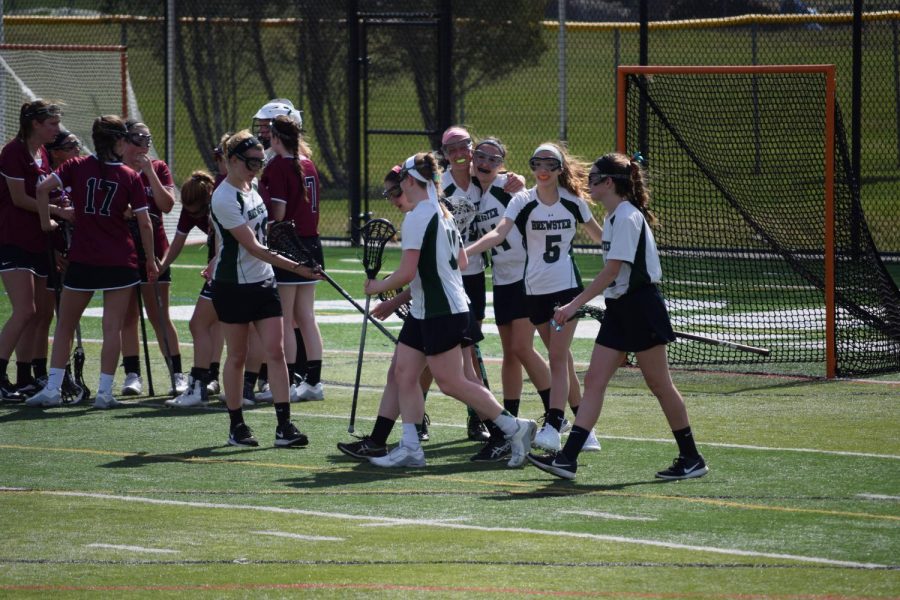 Our spring sports team captains report from the field!

Seasonal highlights include Scott Jacobsen in the 800m 400m, and mile; Reggie Titre-Barnor in the long jump, triple jump, 400m, and hurdles; Max Santamaria in the shot put and discus; Dayshawn Sirinuala in the mile, two mile, and 800m; Kenny Arias in the long jump and high jump; Geovanni Zanetti in the mile and 800m; and Darien Figueroa in the 400m hurdles.

The team has high expectations in sending athletes to states in the field and running events.

With a large crew of 13 returning juniors, with 3 of them starting pitchers, the Varsity Baseball team aims to return to the sectional championship where they fell just short of a complete Cinderella upset, last year. That being said, the Bears have started off a bit rockier than expected. After an 0-8 start, they improved to 2-8 with two wins against Somers.

The Varsity Baseball team hopes to build off their wins and continue with momentum towards a .500 season. The talent is evident, and at halfway through their season, it seems to be all coming together. They ultimately want to get back to the coveted championship and win the first sectional baseball championship in Brewster history.

It has been a short season so far based on unfavorable weather conditions; matches and practice were frequently being pushed back. They are excited to welcome an influx of new players. Last year, the Varsity team consisted of 11 players; this year, the team has more than 15 players. Returning players include: Alec Passarelli, David Diminno, Victor Diaz, Sev Avellino, Angelo Casale, and Will Whitney. The returning players are hyped and ready to bring the pain. Alec Passarelli’s favorite shot is his jumping forehand approach which leaves the opponent stunned and unprepared. David Diminno is our most enduring player with the longest matches. He is always on the court grinding for at least three hours and is clearly our most improved player. Severino Avellino and Angelo Casale make up the first doubles team. Both are extremely strong players, comfortable with both net game and back game. Their incredible teamwork is one of the many factors that leads them to success. Will Whitney and Victor Diaz make up the second doubles team. These two give nothing less than 100% to all matches. They are able to return shots unlike any other doubles players on the team. They have been a shining example of what a doubles team should be like for our new players.

Throughout the season, Brewster suffered some hard losses to teams that they can and should beat. Brewster has gotten mentally and physically stronger, and we are ready to rematch and defeat Mahopac. The team has made great strides in all of our skill sets, resulting in a team of much stronger players, who are ready to tackle challenges that are thrown their way. They look forward to seeing our captain and first singles player, Alec Passarelli, compete in post-season.

So far this season, the Boys Lacrosse team is 3-7. The offense is led by Luca Riolo, Duncan Russell, Jack Guida, Kevin Moroney, and Josh Nelson, with help from the underclassmen performances of Drew Guida and Pat Feehan. The team has wins over Ossining, Pine Bush, and Eastchester. Jack, Drew and Luca are the leading scorers halfway through the season.

The boys need a few more wins in order to make sectionals and make a playoff run. There lies ahead a tough stretch against talented teams, but they look to get a few more wins to close the season. Over the past few games, the team has done exponentially better and they look to build on this momentum going forward.

The Girls’ Track and Field team has had a successful season so far, competing at large invitationals such as Gold Rush and scoring well at leagues. Elsa Neubauer, a freshman, has had an incredible first spring season, recently pr-ing in the 3000m race at 10:30. Senior Amelia Cuomo recen

tly competed at Penn Relays, pr-ing in the 5K race walk. The team will be competing at Loucks soon, a prestigious invitational.

The team’s first big win was against Lakeland/Panas, with a decisive win of 16-7. It represented Brewster as a team and gave the league a snapshot of the type of game the team would bring to the field, as it was the Girl’s first league game. With a tough loss to John Jay Cross River on April 20th, losing by only one goal, the team was then motivated to play better in the next league game two days later against Fox Lane where they won 14-9. Lauren Craft is one of the highest scoring players in the league thus far, and Danielle Regan has been a very consistent player and is on the league leaderboard for assists. Meagan Beal, Lauren Craft, Maggie Depaoli, Marina Souza, Michelle Feighan, and Hailey Ratijack (the draw team), have done a fantastic job this season on the draw circle and work extremely hard to get possession off the draw. The defense has stepped up a level every game played and continues to play solid games. Danielle Heintz and Emily Shaub have been INCREDIBLE in the net, with Danielle having a very impressive game against Somers. Although lost, Danielle kept the team in the game for a long time, being so quick that the other team was talking strategy on how to get by her. Additionally, congratulations to Coach Sara DiDio on her engagement!

The team beat undefeated John Jay Cross River. The team is playing really well and is starting to get on a winning streak. Jordan Sanyshyn is playing well, trying to reach States in his last season as a BHS golfer. Michael Donnelly is shaping up to be a really good player and an amazing asset to the team. Gavin Winkler is playing awesome golf and looks like he will be posting low scores in the future.

The team is looking forward to having a lot more W’s in the remainder of the season.

Nicole Rosner had 14 Strikeouts in a 6-0 win over Ursuline and 4 hitter in a 5-1 win over Lakeland. Makayla Koehler held Yorktown to 4 hits in a 6-1 win. Kelly Dovi and Taylor combined their talents to shut down the left side of the field, while Lindsey McLaughlin, Caroline Cherubini, Makayla Koehler, and Maddison Chiudina have been lights out in the

outfield, catching everything hit their way. Lindsey McLaughlin has been a force to be reckoned with at the plate, batting .500 for the season. Francesca Cioffi is like a wall behind the plate, which is very impressive as it’s her first year catching on Varsity. She’s batting with a .476 average, with 6 of her 10 hits being doubles. Maddison Chiudina has also stepped up as a freshman and hit 2 home runs this season. Cameron Gannon has slid into the second base position and is playing lights out. Karen Lennox has been great at first base and has 7 RBIs on the season so far, 2 being in a win against Lakeland.

The team wishes for continued success throughout the next couple games. With a huge game against Lakeland coming up on May 4th, we’ll see who the League Champs will be. The team hopes to finish strong and carry their success into Sectionals.