Next Stop, River City! – “The Music Man” Travels to Brewster 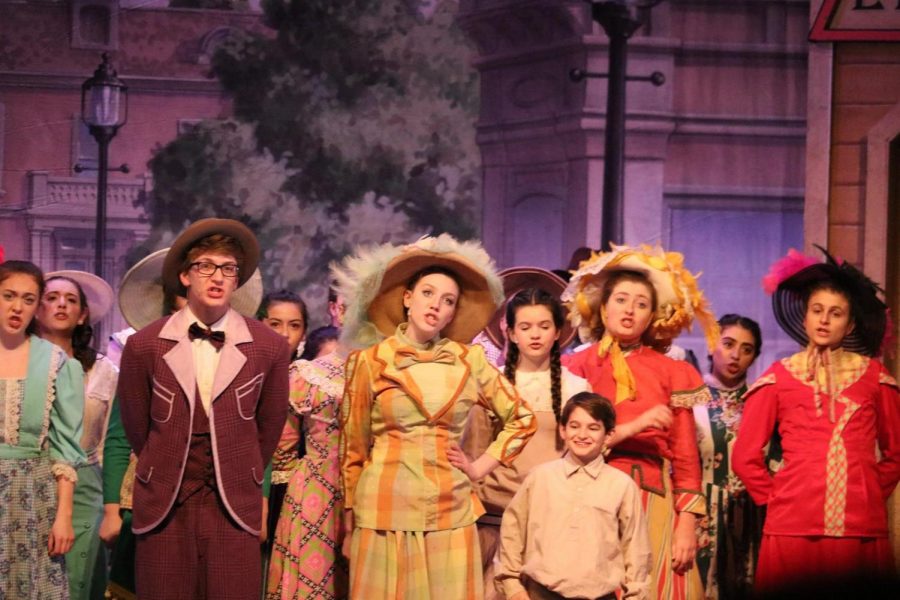 A classic, Meredith Wilson’s “The Music Man” recently marched onto the BHS stage. The over-the-top, corny American musical follows con-man Professor Harold Hill (RJ Frankenberry) and his latest scheme: creating a boy’s band so he can take the town’s money for instruments and uniforms and run. At the top of the show, he arrives in River City, Iowa, ready to scam the crowds. However, the townspeople have other plans, with their Iowa stubborn “chip-on-the-shoulder” attitude, so of course, Harold’s plot goes awry. The town is complete with a leading-lady, Marian Paroo (Megan Campbell), the local music teacher Hill has to charm, and a sidekick, Marcellus Washburn (Maxwell Likens), Harold’s former partner, who ended up in the small town.

Though the town of River City may be full of white-picket fences centered around a quaint town square, the citizens are stubborn worry-warts who are led by the pompous Mayor Shinn (Andrew DiFabio). The pursed lips, sour looks, and shocked faces of the ensemble added to the stick-in-the mud character of the town, with the energy put into their facial expressions drawing the audience into the world of the show. Another credit to the ensemble was the massive amount of energy brought to the iconic songs “Shipoopi,” “Wells Fargo Wagon,” and the memorable “Seventy-Six Trombones.” Thanks largely to the dance captains and featured dancers, the well-executed choreography further complemented the ensemble’s great facial reactions and vocal harmonies.

What also gave the performance a boost was the leads’ commitment to their characters. There was a good amount of character acting required from Mrs. Shinn (Cecilia Guida), Charlie Cowell (Jimmy Hartigan), and Mrs. Paroo (Sarah Borsari). Appropriate to the show, their intentions for their characters was definitely leaning towards comedic, and they delivered. This set of actors continues to improve their comedic skills with each role they take on. Moments like Hartigan skidding across the stage when pushed by Harold, Borsari’s geniusly improvised line, and Guida’s prudelike expression at the mention of Marian’s name, demonstrate that experience has served them well. Other comedic roles included Mayor Shinn and Marcellus, with both Liken’s and DiFabio’s interpretation of their roles (respectively) making it hard to imagine anyone but them playing their parts. Another highlight was the “Pick-a-Little, Talk-a-Little” ladies, who had both the skill for a very vocally challenging song, great comedic timing, and reactive expressions, as well.

Stars Frankenberry and Campbell delivered fantastic vocal and acting performances, yet again. Their chemistry slowly built throughout the show, reaching its height in “Till There Was You.” Both leads gave these iconic roles justice.

Overall, the production was a well-executed rendition of a classic that had audiences laughing along and humming the songs. Congratulations to the cast, crew, pit orchestra, and director, Stephanie Rubino, for another great year!