Mamma Mia, What a Show! Spring Musical Filled With Talent 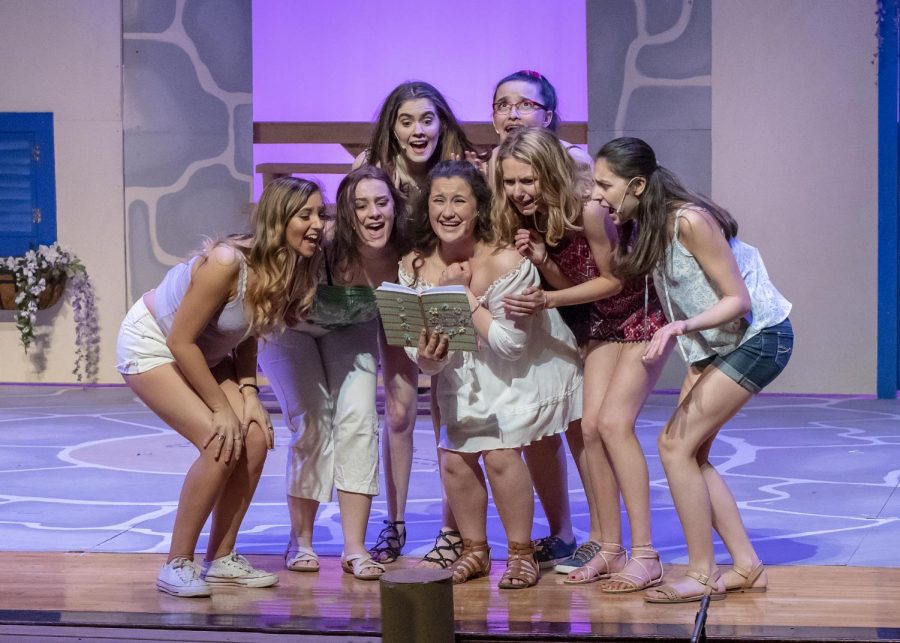 The BHS spring musical performed this year was Mamma Mia! The musical is about a girl named Sophie (played by Jennifer DeSantis) who is planning to marry her fiancée, Sky (played by RJ Frankenberry), on the Greek island where she and Sophie’s mom Donna (played by Caitlin Otto) live while running a hotel there. Sophie wants to have her dad at her wedding, but there is only one problem: she is unsure of just who he is. After gathering clues from her mother’s old diary, she narrows it down to three possible men: Sam (Aaron Lurin), Harry (Andrew DiFabbio), and Bill (Ben Pollak). The storyline takes the audience through lots of drama through the music of ABBA.

When the curtain dropped and the first scene opened at the common area outside the hotel, the set looked very similar to the set in the movie. The windows were an astonishing shade of blue and the plants hanging from the windows were crazy realistic from afar. On the side of the stage, there were two gray curtains which captured the eye with their nature-like sparkle, making the scene even more enjoyable. During my orchestra class before the set was even finished, I had seen the flooring of the stage – and it was clear that the set designers had paid attention to the small details which further enhanced the realistic setting. The fake spray tans on the ensemble characters had everyone cracking up and all appreciated the funny other little storylines going on in the background like when Eddie (Alfonso Mora) was trying to rob a lady of her purse during Money, Money.

At the beginning of the second scene, we were introduced to Tanya (Angela Hupp) and Rosie (Charlie Fitzpatrick) who were my two personal favorite characters. These two, wigs and all, did an amazing job captivating the crowd. Donna (Otto) wore the perfect outfit with her overalls partly unhooked to add a distressed working-mom look to the scene. As we were introduced to the possible candidates for Sophie’s dad, we were immediately captivated by Harry’s British accent and weird run, which the audience thought was absolutely great. Something also worth noting was Bill’s backpack that was as big as he was, complimenting his personality.

Perhaps everyone’s favorite part was when the groom’s friends came on stage in flippers during Lay All Your Love On Me. Watching these guys jumping into the play with a collectively hilarious attitude, gave the audience quite a laugh.

Throughout the play, there were a few adult jokes made that were funny to most of the audience. In front of me, however, were two moms who were constantly being asked “Why is that funny?” by their small children. During Lay All Your Love On Me, the moms were visibly uncomfortable and clearly reconsidering having brought their young kids. It was definitely a PG-13 show and in my opinion, that should have been stated on the flyers with the show times.

The choreography was very impressive and the student choreographers should be very proud of the production. My favorite production number was Gimme, Gimme, Gimme. The dance made everyone want to get up and dance along with the cast!

The singing was beyond good. During the song Mamma Mia! and throughout the entire performance, everybody got chills each and every time Caitlin Otto sang. And when Jenn DeSantis sang in her nice, smooth voice, the audience was also very impressed. These two really knocked it out of the park with this musical.

While I overheard many positive comments about the show, there were a few flaws. Thank You for the Music could have been a little shorter, as even the people performing seemed a tad bored and awkward standing and bopping along with the music. This does not reflect badly on the show as it was so minor to the plot. The most significant – and perhaps the only major problem in the show – was the microphone malfunctions. Microphones turned off at random times during numerous scenes and these imperfections disrupted the flow of the show. When Donna’s mic went out during Winner Takes it All, the scene was less powerful than it should have been. Caitlin Otto, however, found a way to project her wonderful voice and blew the audience away despite the technical malfunctions.

Overall, I felt this production was truly amazing and it showcased many secret talents at BHS. This musical broke down barriers between regular theater fans and the rest of us. Bravo!