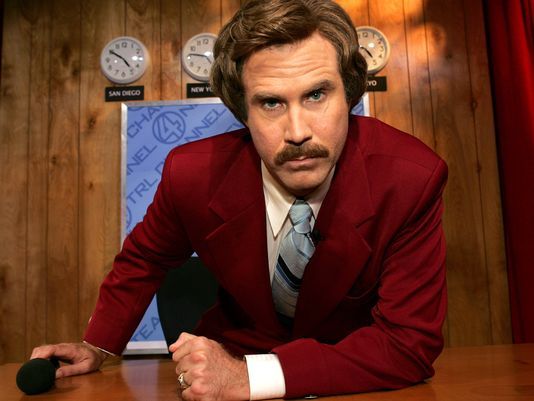 We asked senior, cinephile, and perpetual funnyman Owen to give us his favorite comedies of all time. See what you know and what you need to binge watch tonight.

1 – Anchorman (2004)
Pretty much anything Will Ferrell does is funny, but this is his masterpiece. With a character who’s as infamous as he is ignorant, we will remember Ron Burgundy for years, not to mention the brilliant performances from Paul Rudd and Steve Carell. With a hilarious script and some of the best improvised moments ever put to film, this movie is side-splitting from beginning to end. I cannot describe how deeply funny I find every moment of this movie, it’s the perfect comedy and my personal favorite. I love lamp. 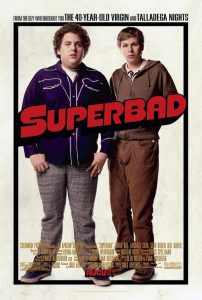 2 – Superbad (2008)
Superbad has the reputation of mostly being a raunchy, hormone-driven teen comedy. While that’s definitely part of its appeal, the movie is so much more than that. It’s really a story about growth and maturity, told through the perspective of two codependent teenage friends who want a night of debauchery before the summer after graduation starts. With screenwriters Seth Rogen and Evan Goldberg being only 13 when they started writing this screenplay, the script reflects accurate teenage characters and situations that at times feel all too real. This movie is hilarious, but it is underrated for the heart, truth, and relevance at its core. This is a modern coming-of-age tale that would make John Hughes proud.

3 – Young Frankenstein (1974)
There’s no denying the brilliance of Gene Wilder and Mel Brooks as a duo. It was hard for me to choose between this movie and Blazing Saddles, but I went with this movie because of the nostalgia I have towards it. Honest to God, I think this was the first black and white movie I ever saw. I hated black and white when I was a kid, but this movie was different. It was so clever and entertaining that I didn’t care. The movie is filled with classic moments and hilarious gags from start to finish. It is comedy in its most clever and classic form done to perfection.

4 – Pineapple Express (2008)
At 10, I was a little young to be watching a movie about a stoner who witnesses a murder and then gets wrapped up in a gang war with his drug dealer. Nevertheless, I watched this movie about 8 times in a month afterwards. It was legitimately my favorite movie, almost solely for the performance of the cast. Every actor is spot on in casting, and James Franco is brilliant here. I’d give him an Academy Award for playing your friendly neighborhood drug dealer, Saul Silver, in a heartbeat. This was the first time I saw a movie where a drug dealer and pot head were the protagonists. It showed me how life isn’t always black and white, that there are grey areas. Not all drug dealers are killers and thugs; some are just fun, silly idiots who love their grandmas and just need a few friends. 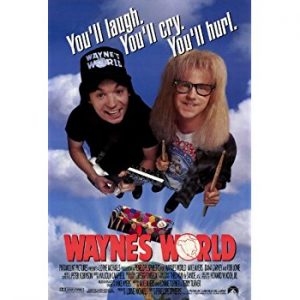 5 – Wayne’s World (1992)
Remember Blockbuster? I used to get movies with my mom there all the time. One of my favorite things to get were the “Best Of” collections for SNL cast members. One I remember vividly is “The Best Of Mike Myers” with the skit “Wayne’s World,” the hilarious talk show done by two losers in their mom’s basement. Then, when my mom told me it was a movie, I was eager to see it. I love the pure goofiness of this movie. Everything is silly for the sake of silly, and it never takes itself seriously. From the “We’re not sullied by sponsorship” bit to the “Choose your own ending” gag, this movie is just fun from beginning to end. After watching this movie, you’ll never be able to hear “Bohemian Rhapsody” the same way again.

6 – Zoolander (2001)
Derek Zoolander is one of the most frustratingly stupid characters ever devised, but that also makes him one of the funniest. His cluelessness is what drives this movie, as he is brainwashed to kill the prime minister of Malaysia when he hears the song “Relax” and is used as a pawn for a much bigger conspiracy that he could not even begin to comprehend. Explaining the plot is like explaining a fever dream you had when you were sick with the flu and left Project Runway on in the background, but that’s part of this movie’s brilliance. A biting look at the fashion industry, it disguises these harsh criticisms by being hilarious. Blue Steel kills me every time I even hear the name. I only wish my kids could attend the “Derek Zoolander Center for Kids Who Can’t Read Good and Want to Learn How to Do Other Stuff Good Too.”

7 – Austin Powers: The Spy Who Shagged Me (1999)
To me, Austin Powers as a character is a piece of history. There are few who wouldn’t recognize the big black rimmed glasses, fluffy shirt, and catchphrases. In my opinion, the second movie in the trilogy is the Godfather Part 2 of comedy sequels. Every scene is classic: the naked strut through the hotel with a lot of conveniently placed flower pots and railings, Dr. Evil on the Jerry Springer show, stealing Austin’s “mojo,” any scene with Mini-Me or Fat Bastard, the misleading silhouettes, lasers on the moon. Do I really need to say anything more?

8 – The Big Lebowski (1998)
When the Coen brothers do comedy, it’s hit or miss. A huge hit for me, this movie boasts one of the sharpest scripts for any comedy. Every scene is layered with hidden meanings and easter eggs that will take even the most eagle-eyed viewer multiple viewings to catch. Jeff Bridges was born to play “The Dude,” a lazy good-for-nothing stoner who is pulled into a kidnapping scandal after his rug is urinated on by vengeful pornographers looking for their money in a case of mistaken identity. The plot gets more and more complicated as new characters are introduced and people’s true colors are shown. This movie requires some thought, and it gets even funnier every time you watch it.

9 – Bridesmaids (2010)
If you’re one of those people who thinks “women aren’t funny,” I would tell you to watch Bridesmaids just to prove you wrong. Every cast member utilizes their full comedic potential in a movie with a mostly female cast. Kristen Wiig proves she’s a comedic force to be reckoned with as she stars in and writes this tour de force of funny. Melissa McCarthy is shockingly funny in every scene in a performance that is nothing short of genius. A game changer with two Oscar nominations (Best Original Screenplay, and Best Supporting Actress for Melissa McCarthy), I think it’s safe to say that this is a movie that will be talked about for years. 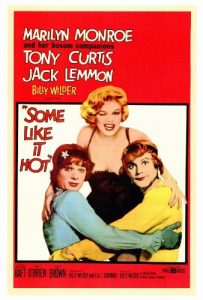 10 – Some Like It Hot (1959)
The very thought that this movie came out in 1959 is shocking, since it revolves around two men disguising themselves as women to hide from gangsters who want them dead. Seeing men in drag was a real concern to audiences back when this movie was released, with some theaters even refusing to show it. But if there was any director who could tackle this and make it a smash hit, it was Billy Wilder. The movie still holds up to this day. I only saw it for the first time a year ago, and I was surprised by how fresh it felt. This is probably your grandma’s favorite comedy, but that doesn’t take away from it, at all. With 6 Academy Award nominations, this movie is cemented as one of the finest American comedies to ever be made.