Despite Fan Grumbling, Guardians Vol. 2 is Worth the Watch 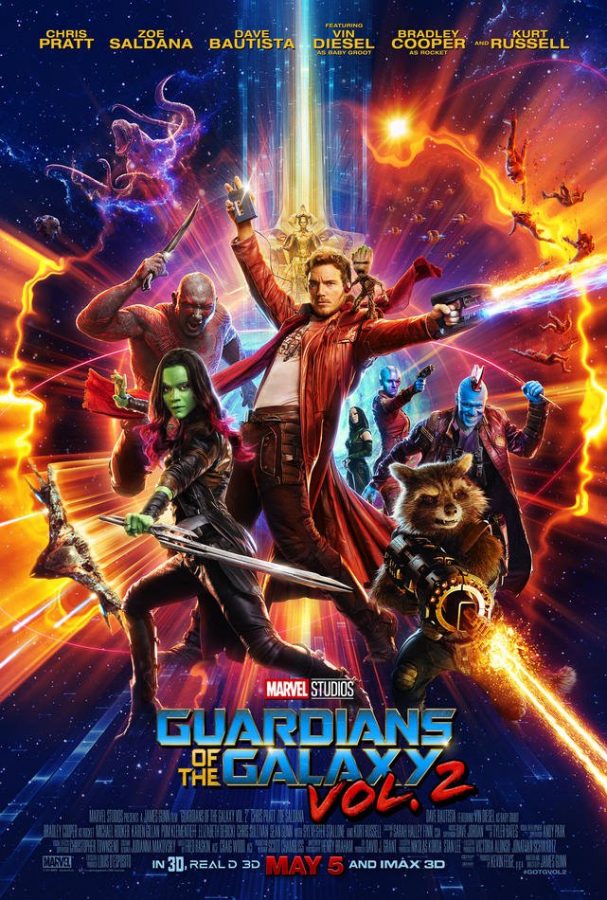 Following the wildly popular 2014 release of Guardians of the Galaxy, which is based on the comic book of the same name, fans were anxiously stirring in anticipation for the prominent sequel. While most would argue that Guardians of the Galaxy: Vol. 2 delivers on all fronts, some fans argue that the film does not feature enough plot development and is more of a “fluff” film than anything else.

The new film follows the usual characters: Peter Quill (aka Star-lord), Gamora, Drax, Rocket, and the newly re-grown Groot, known as “Baby Groot.” The story follows the Guardians as they flee the Sovereign race, as Rocket has stolen powerful batteries the Guardians were tasked with returning to the Sovereigns in exchange for Gamora’s sister, Nebula. During their escape, they run into a mysterious man who ultimately reveals himself to be Peter’s father, Ego. Peter and Gamora return with Ego to his home planet, where things aren’t as they seem. With the crew split up, Rocket, Groot, and Nebula (as their prisoner), while repairing their ship, are found by Yondu, the man who raised Peter and was hired to hunt down the guardians with his crew. When the crew decides to revolt against their leader, Rocket and Groot team up with Yondu in an escape attempt and to try to save Peter, Gamora, and Drax, who are slowly noticing the cracks in the facade at his father’s home planet. Once again, they all must save the galaxy from destruction, unsure if they can accomplish it a second time.

The acting performances in this film are undeniably good, featuring strong portrayals and depth from each of the main actors. Most noticeably among them are Zoe Saldana as Gamora, whose powerful and intense presence proves why she is the best fit for Gamora, and Sean Gunn as Kraglin, whose comic expertise and timing help balance some of the more serious scenes. One performance that was not entirely impressive would be that of main actor Chris Pratt, who, while doing very well in maintaining his stature and serious performance in the first film, hit some wrong notes with this film. As a character that is going through a time of personal turmoil, Pratt does not always reach the level of emotion appropriate for the character, often making hilariously bad faces when trying to be serious or puffing out his chest just to seem more like a hero. It was an awkward fumble for an actor who has had many stellar performances in the past.

One thing fans were upset with was the lack of plot development. While this film was beautifully made, well shot, and features gorgeous CGI and special effects, it was simply seen as filler. Yet, seeing the change in pace and the focus on the interpersonal stories of the characters is lot more interesting and is a refreshing change from the archetypes and cliches of most superhero flicks. However, fans saw this approach as boring and slow, claiming the movie featured more Daddy issues than action.

Of course, this is for the viewer to decide for him or herself, as it is still recommended that everyone see Guardians of the Galaxy Vol. 2 in theaters now for the strong acting, great effects, and as a unique addition to the superhero genre.