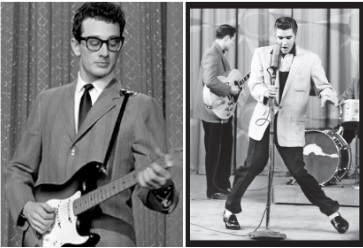 Everyone knows about Elvis and his legacy. Everyone knows him as “The King.” However, there is a musician from the 50’s who trumps The King himself: Buddy Holly. Both Presley and Holly were heroes of the 50’s, but Holly was the better musician of the two. Like Elvis, Buddy Holly influenced many musicians and bands such as The Beatles, The Rolling Stones, Bob Dylan, Eric Clapton, Bruce Springsteen, and more. Elvis is an icon, there’s no question about that, but without Buddy Holly’s example and influence, it’s possible that many iconic artists of the 60’s may never have picked up a guitar.

Elvis had many legendary and timeless songs, but many don’t realize that Elvis didn’t even write most of his songs. Of the hundreds of songs that Elvis sang, he is credited with actually writing just ten. Buddy Holly, however, wrote many of his songs himself, including the infectiously catchy “Peggy Sue.” Yes, Elvis was an innovative performer, being the first singer to shake his hips on stage, but it was Buddy Holly who was the true musical innovator, being one of the first musicians to play guitar live on stage. While Elvis was a talented rhythm guitarist, on stage he used his guitar as a prop and usually didn’t play it live, especially as he became more famous.

Holly played guitar live, a rarity during his time. Young John Lennon and Paul McCartney would watch Holly closely on TV to see if he was hitting all the right chords, as his live musicianship was very impressive to the future Beatles. Also, Holly was the first rock and roll artist to use an orchestra in his songs (e.g. – “True Love Ways’ and “Raining in my Heart”). At the time, classical musicians thought Holly was crazy, but today artists of many different genres feature orchestral accompaniment in their songs (e.g. – “Eleanor Rigby” by The Beatles, “I Don’t Want To Miss A Thing” by Aerosmith, “Skyfall” by Adele). Buddy Holly was also a pioneer of the art of double-tracking, the method an artist uses to create a bigger sound by singing along to their pre-recorded performance. The Beatles later mastered Holly’s technique of double-tracking, which is best displayed in their song “Tomorrow Never Knows.”

Both Buddy Holly and Elvis Presley are legends of rock and roll. They were each talented innovators in their own ways. Although many people consider Elvis as “The King,” the vastly overlooked Buddy Holly is the true influential musician.