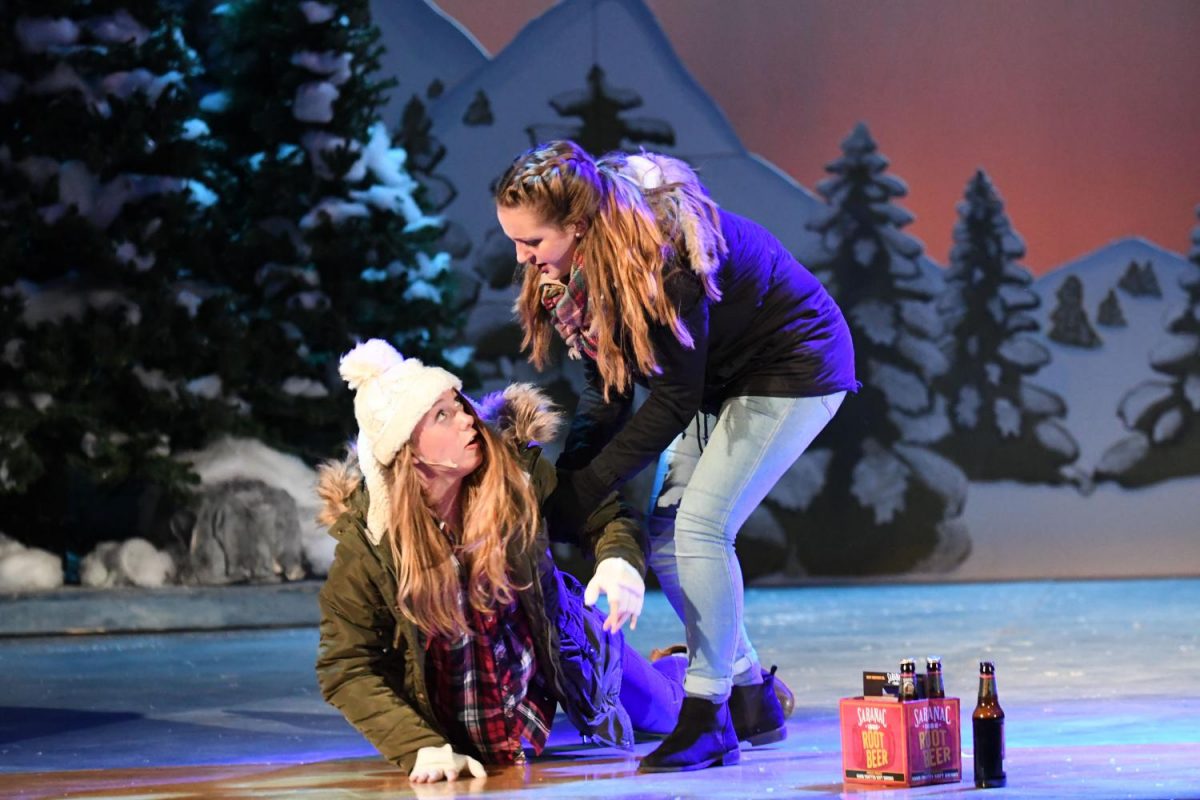 Grace Curley’s and Megan Campbell’s characters are falling for each other as they reminisce about old times. All play photographs courtesy of 4sonsphotography

The BHS Fall Drama this year was a contemporary dramedy in the form of a series of vignettes.  Each scene took place in the same town, in the same timeline, but with different characters and plots.  The connecting thread between all was the subject of love. That gave the audience insight and unpacked different types of relationships that come with love.

I sat down in the PAC with my friends not really knowing any of the plot.  I confess, I probably would’ve loved the show even if it was about chaos.  I’ve been an avid BHS theater-goer from a young age, and have an appreciation and respect for the process of theater.  I also had friends in the show, and I went to support them.

The curtains opened to snow-covered trees, soft light, and a wooden bench.  It began with the first couple, the slightly awkward boy and the shy girl that you know will end up together.  And so it began.  During the next two hours on the stage, through metaphors, artistic nuance, and raw emotions, the characters grappled with the state of love- what it’s like to be in it, lose it, fi

nally express it, regret it, or realize it.  I applaud the actors and all those involved for their amazing efforts to present a piece of art with personal charm.

Highlights of the night included the performances of Megan Campbell (Deena), David Dimmino (Wendall) and Cecilia Guida (Marci), all of who added to the authenticity of the show.  From Megan’s sincere portrayal of confessing love, to Cecilia’s empathetic comedic timing of Marci’s heartfelt raw pain, to David who, for never having acted before, gave Lendall a calm and collected personality while leaving him open to the comedy and realization of the scene, these actors clearly loved being on the stage, inciting power laughter, gasps, and sighs in response.

I applaud the choice of the play as a whole, being more contemporary, as it was a fresh contrast from other plays in recent years.  The writing and delivery made us feel like we couldn’t help but immediately relate the characters’ situation to our own.  We felt we were in the world of the show, presented with the complex emotions of conflict, desire, anxiety, and frustration that we put into or take out of love.  The stories were portrayed with such authenticity, that even if you’ve only ever heard of love– you could be reached in some way.

I think “Almost, Maine” will be in my memory whenever I face losing lo

ve, finding love, or being in it.  The characters and their stories were given to us honestly and un-imposingly, and they have stayed with me since.  I know that many others were as captivated by the deep examination of love as I was, and I’m excited to see what will come next.