How I Spent My Summer Vacation with the US Government 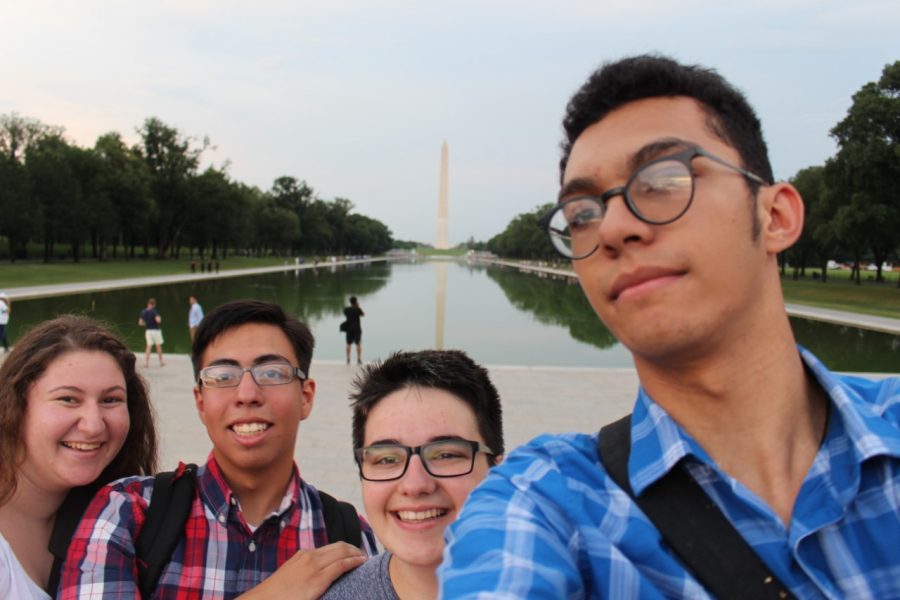 Victor and three page program participants enjoy their time on the DC mall.

Everyone had a summer plan. Some people would be traveling to Puerto Rico or the Caribbean to enjoy some sun, going to that Mystic concert one day and then chilling at home the next day, or going to Cape Cod, for the cool summer breeze up in Massachusetts.

What did I have to do? I had to work.

But no ordinary work. I was meeting new people, whether they were high school students from San Francisco or college students from Montana State University acting as my “Page Coordinator.” They all applied here, all got in, and all decided to be a part of the U.S. Senate Page Program this summer, for reasons that included getting away from their hometowns, seeing the new lights of an unknown city, or being at the forefront of debate in the U.S. government: the U.S. Senate.

And I loved every minute of it.

The pages were from all over the country: Mississippi, to Texas, to Ohio, to other people from here in New York. They all came to Webster Hall.

On the first day of orientation, after being late for inspection, we went over just about everything that we had to do in the Senate. We needed to know “floor etiquette,” how and when to set up a Senator’s desk, how to get water, lecterns, easels, and staff chairs for each Senator when it was their turn to speak. We learned how to open the Senate doors when asked to, when/how to communicate messages from telephone booths to Senators on the floor, what to do during “Roll Call Vote” and “Amendment runs,” and what each abbreviation meant when delivering documents between the Capitol Building and the Senate Office Buildings (like how SR-303 means Russell Senate Office Building, Floor 3, Room 303). This was all taught to us on the first day of work, all before the Senate went into session later at 3 PM.

After lunch at Senate Dirksen Cafeteria, my shift made its way back into the Capitol and up to the Senate Floor, right before they gaveled in the first session, followed by the prayer from the Senate Chaplain (that included a little piece about the Pages), and the Pledge of Allegiance by the Senate Pro-Tempore, Senator Orrin Hatch from Utah.

Then began the real work. We took our places at the rostrum, and began to do our job, which was to help the Senate run effectively and smoothly. We delivered papers and documents when needed and saw to those other things previously listed. Yes, there were moments of not much activity, but some of the documents that I delivered were significant.

I remember one specific moment of delivering a special package. I was to deliver a letter to Senator McCain, from Senate Minority Whip, Senator Durbin. I couldn’t look at the letter, but I could infer its contents. I held a penned letter to Senator McCain, who just that week had been diagnosed with cancer. I understood this letter’s significance while I rode the trolley to the Russell Senate Office Building, and I knew how quickly I needed to get the letter to Senator McCain. Everything had a sense of urgency, a sense of a bigger meaning, that something greater was in the works, regardless of the political climate, whoever was President of the time, or what party was in control.

The best moment came when I was in the Senate Floor on the first night of work. I took my position at the front of the rostrum with a clear view of all the Senators. A tall, young, confident man strode down the aisle, and as he got closer, it hit me: Senator Cory Booker from New Jersey. He raised his hand and said, “Hello, Victor!” I was stunned and honored that a U.S. Senator called me by name. When I realized that he had his hand extended, I returned it with the greeting, “Hi, Mr. Senator.” We talked a little during the vote that was taking place. He asked me where I was from, jokingly groaning when I said that I was from New York. I laughed, and we had a cool little moment, right in the middle of a tense vote for the confirmation of a Trump nominee.

Another moment came in the Senate subway. Coming back from lunch with my coordinator, we quickly got into a subway car to head to the Capitol Building. A couple of pages and I looked over to spy Sen. Cory Booker lying down on the subway seats looking at his phone. He looked up, realized we were watching him, and gave us a huge smile. We talked through the 30-second ride to the Capitol, with the Sen. delivering many jokes on the way. Close to the end, someone mentioned that it was my birthday, and with a big smile he said, “Happy Birthday Victor!” We chatted while exiting the car and going up to the Senate Floor, and although small, it was an awesome conversation with the Senator, all by pure luck.

Another really awesome moment occurred while I was working the Caucus lunch for the Democrats. I needed to time tally all the Senators when they came through the door, relay any messages from staff to the room, and deliver packages sent from a Senator’s staff. Well, while marking Senators coming in and out of the meeting, I saw and marked Senator Booker as coming in. But instead of walking in and taking a seat at a table like Senator Gillibrand and Senator McCaskill, or going for the buffet line like Senator Durbin and Senator Sanders, he went straight for the desserts, grabbed two plates of chocolate cake, came back outside, and gave them to us Pages. What a cool moment!

One final moment was at the end of my “vacation.” It was the day after the marathon vote at 2:00 AM on Healthcare. Bleary-eyed about the last time I was going to be able to step inside the U.S. Senate Floor, Capitol Building, and Senate Office Buildings in awhile, I got a pleasant surprise: my family had arrived. I showed them in through to the Senate Visitors Desk for badges and gave them a tour of the Floor and cloakroom. I took my parents through the phone booths of some Senators (including JFK’s, which I used to call them earlier that day), all the way to the Senate Floor. Their reactions were priceless, amazed at everything from the desks of where each Senator sat to where I sat during work. I especially loved my grandmother’s reaction. She was here on vacation from Colombia. She saw the Senate Floor with her own eyes. She was amazed, but being here meant more to her. She had a difficult life in Colombia, and with one of her daughters able to come to the US and establish a life here now, and her grandson working for the U.S. government, it meant a lot. To be able to bring her into the most deliberative body of the US government, something that must’ve been unimaginable to her, was one of the best moments of the experience. Showing my family what I want to do, and observing their reactions to me on my way to achieving my goal, which is to serve the American people, in the best way I can.

And that’s what I did last summer!