What Words Do: The Pain of Social Media 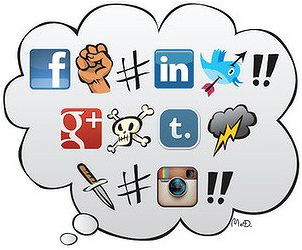 an anonymous opinion from an informed source

We live in a world where messages can be sent from thousands of miles away and reach someone within seconds. Words are dangerous: they can tear people down just as fast as they lift people up, and this is something that needs to be learned by teens. Teenagers need to think about how their words affect people in order to live harmoniously.

Social media gives teenagers and young adults the opportunity to say things that they normally wouldn’t say in person. Computer and phone screens give people a false sense of confidence, allowing them to freely express both positive and negative messages to whomever they want. Often times, these individuals fail to recognize the consequences of their actions. Imagine going to school and at the end of the day, hearing that someone was talking about you: would you wait until the next day to confront them? No, most people would take this confrontation straight to social media.

This rash reaction has become a grave problem in our world. It is a problem because it affects people in their futures. One bad decision can come back and mess up a great opportunity for a person. People don’t think twice about the things they say: they act on emotion, and then once they realize that they acted hastily, they try to delete their words. But by that time, it’s too late: it’s been retweeted, screenshot, shared, and reposted. This series of events does not only affect the person who is being verbally attacked, but there may be consequences for the “attacker” that last for years. Once a status or images are uploaded to the internet, they stay there forever. Colleges can use what teens have posted online to determine whether they are accepted or not.

Another dangerous effect of social media confrontation is the unknown; people bully others online without fully knowing the specifics of people’s lives – at home or elsewhere. Some children face poverty, illnesses, or abusive homes. Most people don’t just shrug off rude comments made about them. When people don’t stop to think about what they say to others, they may end up adding more pain to someone’s already stressful life. Sometimes victims may act like they are okay, but they must carry each insult with them throughout the day, everywhere that they go. This adds more unnecessary stress to people’s lives. Teens are already at an age where they are self-centered and feel self-conscious. Adding the additional stressor of being bullied will lead to additional stress.
Teenagers need to realize that words hurt, words break people down, and words have meanings, whether they are sent online or said in person.

Thinking about what we say before we say it helps a community. Words can make someone’s day or destroy it. Picture this: you’re walking to school and someone trips you. Then that person starts to insult you, calling you names that shouldn’t be said. Then, in your lowest moment, you hear a voice telling that person to back off. This same person tries to help you and says to you, “You’re a good person; none of his words were true.” If you set an example by speaking kindly, then the people around you will begin to do the same. If everyone is kind to each other, then all of our lives will be easier. The secret to having a safer and happier community is having people be nice to each other and genuinely care for one another. Once everyone can trust that their neighbor will be kind to them, the community will be solid. No one will need to fear what people say to them; we will finally be able to live harmoniously.

If teenagers limit the use of their technology, they will be more likely to remain kind. They can do this by keeping track of the time they spend on their phones each day. We have a chance to change the way people use social media: it’s now in our hands.

When we use our phones, speak with love, text with compassion, post with kindness.