He Said/She Said: Should We Keep “Under God” in the Pledge? 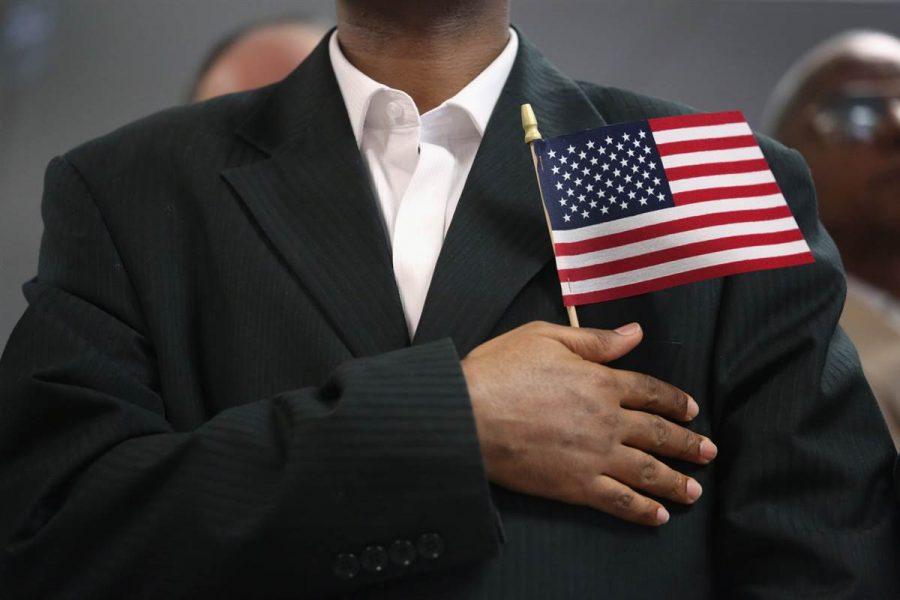 She Says No
“I pledge allegiance to the flag of the United States of America and to the Republic for which it stands, one nation, under God, indivisible, for liberty and justice for all.”

This is the pledge of allegiance, a saying that many of us start our day off reciting when we’re in school. The question is, should “under God” be in the pledge?

Up until June 25, 1962, the belief that children should have a reliance on God and should regularly pray was removed from the mandate of public schools in New York State. This was the result of the court case Engel v. Vitale. Engel joined forces with other parents to attempt to remove religion from school as he believed it was infringing on their first amendment rights. Including the phrase “under God” established the fact that religion was being “taught” in a public school. There are still schools in NY that teach religion, but these are typically privately run Catholic schools.

The purpose of the Pledge of Allegiance is to unite students in their loyalty to their country and give them the opportunity to express their patriotism. This appeal to unity excludes those who do not share religious beliefs or affiliation with the God included in the pledge.

Yes, the meaning of the pledge may have changed slightly over time, but the inclusion of “under God” assumes a belief in one higher power, a creator who predetermines and judges our lives.

America, our “one nation” referred to in the pledge is populated by those many religions we represent and practice: from Christianity, Catholicism, Judaism, Muslim all the way to atheism and agnosticism (those who do not believe in or follow a religion). In respect of the wide range of religions practiced in the United States, the phrase “under God” should be removed from the pledge of allegiance.

The pledge is supposed to make everyone in the United States feel united and believe that we are in this together as one America. Although using the phrase “under God” in the pledge might not heartily offend people, omitting the phrase invites us all into one nation, indivisible, with liberty and justice for all.

He Says Yes
Originally, the Pledge of Allegiance was written by Francis Bellamy for the magazine The Youth’s Companion on September 8, 1892. This version was intended for use by citizens, especially students, to honor the American Flag. Later, the introduction of the clause “of the United States of America” was included to ensure that immigrant children would understand which flag they were saluting.

The two words “under God” were added to the pledge in 1954 in response to the Communist threat of the times. Reverend George Dorcherty suggested this because as an immigrant from Scotland (where it is common to say, “God save our gracious queen/king”), felt the same should be said in the US. President Dwight D. Eisenhower agreed with Reverend Dorcherty’s sentiments and when Congress introduced the bill adding the phrase to the pledge, President Eisenhower was ready to sign it into law. The question of whether or not to keep “under God” included in the pledge was debated for a while.

These two words should remain. Many disapprove of the mention of God, as the reference is intended to be the Christian God. Yes, this nation is full of different religions and has a significant atheist or agnostic population, but one justification for the use of “under God” is that since it does not use the specific name of God, it could be any individual’s personal deity.

This is the same justification Reverend Dorcherty used, that Muslims and Jews could use “under God” the same way Christians could. It is also considered a possibility to extend this to other religions, as the “god” of science which is acceptable for atheists or agnostics.

The Pledge is open to interpretation. “Under God” can be perceived as the nation being held together beneath an immortal invisible force, whether that force is a sentient divinity or the ideal of liberty and freedom.

Another reason to keep it is because the Federal Government and the courts make constant use of God in the legal tender. God is mentioned in the introduction of the Supreme Court, declaring “God save the United States and this honorable Court.” The reference to a Creator was made by Thomas Jefferson in the Declaration of Independence, where he declares, “that all men are created equal, endowed by their Creator with certain unalienable rights.” These statements are less religious and more symbolic, stating that God is watching over the proceedings or protecting the possession of an individual’s rights. The rights of the people are entitled by all; no one can take them away.

The use of God is just; He is a being beyond reproach. Christian Doctrine says that God is all-powerful. Whether or not you believe God exists, the idea that our inalienable rights are beyond reproach is an important concept for everyone to have, especially in a Pledge to maintain unity within the United States.

Finally, we must remember that saying the pledge is not mandatory. In the case of Elk Grove Unified School District v. Newdow, one Mr. Newdow was upset that his daughter was made to listen to others recite the Pledge of Allegiance, although she was not required to recite the pledge. Three justices in West Virginia agreed that it is unconstitutional to force anyone to say the Pledge.

I do not agree with removing “under God” from the Pledge, but I do agree with allowing people to chose. By giving everyone a right, they can express their views in a simple and peaceful way, which is absolutely within their right. Ultimately, the Pledge along with other uses of God in American Doctrine are a result of the past, but this past still goes beyond the church influencing the state and actually more focused on the intangible and undeniable virtues that form the foundation of our nation.