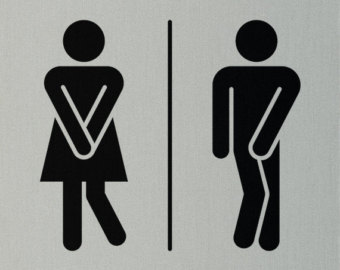 How would you characterize the current state of the bathroom usage/abuse by other students in the building? If you can identify issues, how would you suggest they be resolved? In attempt to effect positive change, we want to hear from you.” We received 40 well-thought out responses that were both alarming and disconcerting, to say the least. This article now serves as a mouthpiece to those concerns which will hopefully draw enough attention to the issue to effect a change.

A good starting point is the regular lack of necessities – namely toilet paper – in the bathrooms. Consider the bathroom in the girls’ locker room. There is a regular litany of complaints about the state of under-filled toilet paper dispensers in this restroom, but it remains unresolved. Another simple problem in this bathroom, which perpetuates, is the broken lock on one of the stalls. The door cannot be locked. This may not seem to be a problem, but it leads to further complications. If someone has to use the restroom before gym class, and the other stall is taken or there is a line to it, we have to find someone to hold the door closed for us and then we end up being late to gym class. Couldn’t this lock be permanently repaired?

The same result comes from a lack of toilet paper. If there is no toilet paper in either of the locker room bathrooms (boys’ or girls’), we have to leave the gym to find a different bathroom farther away, again taking up so much time spent roaming the halls looking for an adequately equipped restroom. A solution to this would be either to leaving extra toilet paper in the bathrooms, or having someone check to replace it periodically during the day.

There is also a problem with the lack of soap in almost all of the bathrooms at some point during the day. In kindergarten, we are taught the importance of washing our hands. So, this is a completely unsanitary condition. Schools are hotspots for germs; without the means to properly wash our hands, more students catch colds and spread the germs that make other students sick…we then miss school and fall behind in our class work. To this unsanitary condition, add the fact that a number of the restrooms flood – especially the locker room bathrooms – just compounding an already unhealthy condition.

Finally, in terms of neglected conditions, there is the number of working sinks. In most bathrooms, there are usually three sinks. However, almost every day, students walk into a bathroom where only one sink is working. This gets frustrating when we have only three minutes to get to our next class and we have to wait on a line to wash our hands (in a sink where water is remarkably cold).

Then there comes the controversial student-based issue: juuling. This is an abuse of our right to privacy in the bathrooms. It has become such a big problem that students actually have to avoid using the bathroom because they don’t want to have to deal with the students who juul. Students report not feeling safe in the bathrooms. On multiple occasions, students have said they have found it hard to use the restrooms because of the gang mentality of the juulers who think it is their right to convene and abuse those of us who simply wish to use the restrooms in a private manner – as they were intended.

Not only is it uncomfortable for those trying to tend to their own business, it’s unhealthy for those taking part in “social hangouts” in the bathrooms. It’s a lose-lose situation. Vaping and juuling is a decidedly difficult issue to address. In previous attempts to solve the issue, almost all of the boys’ bathrooms have been locked, which is not a very effective or healthy alternative. One step to help prevent this unsettling and awkward situation is to more closely monitor who’s going in and out of the bathrooms; establish a list of frequent trip makers? Perhaps invest in some kind of electronic pass with a limit to how many times in a day it can be used? It’s a better alternative than locking all of the bathrooms except one.

Our school bathrooms shouldn’t be places that students avoid for whatever reason, whether it’s uninviting due to its lack of cleanliness or functionality, or because students feel unsafe interrupting a vaping or juuling hangout.

We can all agree that our academic workloads are stressful enough — we don’t need the state and misuse of our bathrooms to burden us further. Should someone step in and help us out with these situations, the student body would be forever grateful, but until that day, we will continue to do our best and suffer under these deplorable conditions.

Quotes from our survey responders regarding the state of the bathroom:

“I don’t want to go in the bathroom and walk into a cloud of smoke. Put guards in front or something but I’m done with breathing in smoke while trying to use the bathroom.”
“None of the sinks work in the bathrooms which is frustrating when there are 6 girls in the bathroom and we all have to wash our hands …Science wing bathroom only has one working sink.”
“The bathroom in the gym is alway flooded and the doors never lock. The girls bathroom next to the cafeteria smells absolutely disgusting. There constantly clogged toilets and toilet paper everywhere.”
“I’m afraid to use the bathrooms at school because I don’t feel safe in them, anything could happen and when you walk in the amount of times my friends had said they’ve seen a group of kids using a juul or e-cigarettes.”
“Almost more than half of the time the girls bathrooms don’t have toilet paper in them. Almost always the bathrooms in the locker rooms are flooded and un-useable and never have any toilet paper in them.”
“I would sometimes consider the bathrooms as more of a smoke shop than a bathroom. I find that they are typically dirty especially the boys one next to cafeteria. Sometimes it doesn’t even have soap.”
“The bathrooms are disgusting. Besides the vaping that goes on in there, there’s also some things that are scratched on the stall walls.”
“I see and hear about tons of kids abusing the bathroom by using their time to smoke or vape and what not…I don’t think that we should shut down bathrooms however. I think that we should have more hallway aids to prevent this.”
“I’ve been in the high school for 3 years now and STILL nothing has been done to fix these issues.”