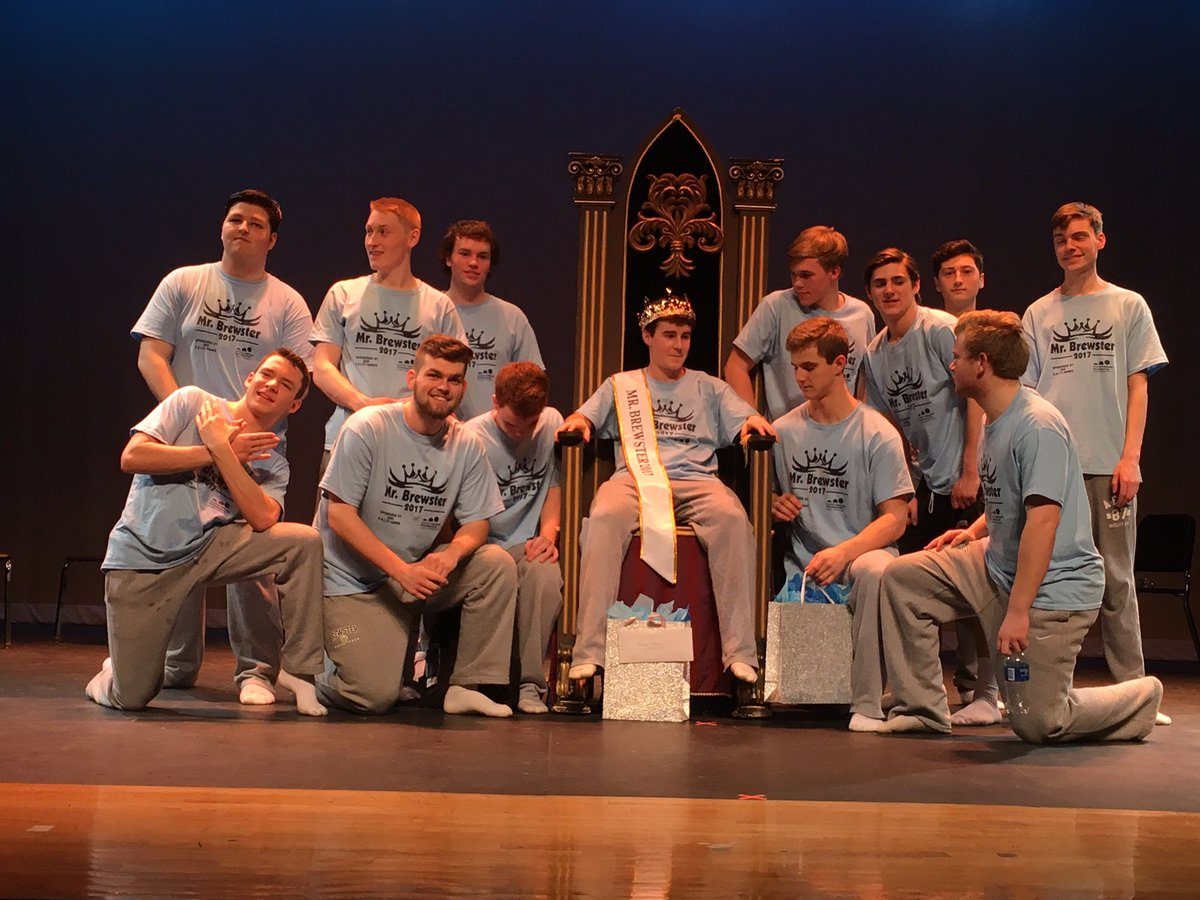 The Mr. Brewster contestants crown their winner and celebrate a job well done.

It was that time of year again, the middle of winter with another muddy month to get through…not much fun to look forward to except that it was finally time for the annual Mr. Brewster Pageant. This year had a record thirteen contestants on stage, but only one to be crowned and given the title…“Mr. Brewster.”

But what is even more astounding than the talents of the thirteen contestants, is the $35,000+ raised by this group of thirteen guys. And the cumulative seven year total of over $115,000 raised to combat Cystic Fibrosis.

Cystic Fibrosis, commonly called CF, is an inherited life-threatening disorder that damages the lungs and digestive system. CF affects the cells that produce mucus, sweat, and digestive agents, causing the fluids to become thick and sticky and plugging up tubes, ducts, and passageways. There is currently no cure for CF, but there are medical treatments that ease symptoms and reduce the occurrence of medical complications. Money is needed to fund research and continue the fight for a cure. About 30,000 people in the U.S. are affected by CF, but more than ten million people potentially carry the CF gene.

The group behind the Mr. Brewster Pageant is the BHS S.A.L.T.Y. Hands club, advised currently by Mrs. Donna Lieval. The club originated in 2004 with Mr. Peter LaMoreaux and former principal, Mr. Matt Byrnes at the helm. In addition to the Mr. Brewster Pageant, S.A.L.T.Y. Hands hosts numerous walks and fundraisers throughout the year to raise funds and awareness for CF research.

This is the seventh year that the club has hosted the fundraiser and each year’s group of contestants raises the bar higher than in years past: this year was no exception.
The competitors for this year’s Mr. Brewster Pageant were: Brendan Feehan, Jack Guida, Sean Nevin, Sean Kelly, Nathan Beal, Connor Dignan, Tim Catalano, Austin Kaelin, Ryan Wynne, Ryan Hecht, Spencer Bera, Anthony Aiello, and Chris Zavras. However, a big shout also out needs to go out to the guys who didn’t make it on stage but were just as important to the spirit of the event: Luca Riolo, Kevin Heintz, Nick Leahy, Rob Peifer, and Sebastian Melchiori, totaling a record of eighteen fund raisers for 2017. This year’s panel of judges consisted of Ms. Schumacher, Mr. Goumas, Mrs. Sweeney, and Coach Castaldo. In addition, the host of the evening was Mr. Matt Cunningham, who never fails to crack a few good jokes and keep the audience entertained throughout the competition.

The show itself was quite entertaining with many moments of singing, dancing, and lot of laughs. Brendan Feehan embraced his inner Neil Diamond by singing Sweet Caroline. Austin Kaelin explained that he possesses “shrimp like” features and Sean Kelly promposed to Lindsey McLaughlin. The night started off with the introduction of the contestants who were escorted on stage by the person of their choice…or four, if you’re Anthony Aiello. Then, there was a Q&A session where apparently no topic was off limits. Tim Catalano serenaded Mrs. Wynne. Connor Dignan threw shade right back to Cunningham by telling his most recent lie, “You look good tonight.” Nate Beal said his dream profession is to do whatever it is Mr. LaMoreaux does, even though he’s not exactly sure what that is, but neither does anyone else…so it was okay. And ladies, be on the lookout for a certain someone attempting his “night moves.”

Following the Q&A segment, there was the highlight of the night: a dance routine, expertly choreographed by the BHS Dance Team. This brought down the house. The dance featured moves from ballet, to Irish step dancing, to synchronized swimming, to hip hop, and even a re-enactment of a scene from The Lion King.

Once the dance concluded, the audience was treated to the talent portion of the competition. The talent show was entertaining with Brendan Feehan, Jack Guida, Sean Nevin, and Ryan Hecht attempting to sing the songs Sweet Caroline, Call Me Maybe, 1,000 Miles, and several other memorable (though questionable) numbers. Connor Dignan recited a love poem to Ms. Schumacher by using the famous line “To be or not to be, that is the question” from Hamlet, which ended with Ms. Schumacher’s reply, “Methinks you don’t know Shakespeare.” We saw Anthony Aiello’s method of childcare: simply kick a baby when it gives you trouble… Spencer Bera did a spot-on impression of his favorite scene from Bruce Almighty. Ryan Wynne mocked Mr. Cunningham’s new catchphrase, “Fact” and Ryan Hecht proved to be the audience’s favorite with ear-shattering screams anytime his name was mentioned. To conclude the talent segment, Chris Zavras got everyone on their feet and dancing to songs such as YMCA, Cha Cha, and Watch Me.

Since only one could ultimately be named Mr. Brewster, Brendan Feehan took the crown at the end of the night by raising over $7,000, followed by Jack Guida, Sean Kelly, and Sean Nevin. The Brewster High School community is extremely proud of the hard work that these guys did fundraising for a great cause. And we cannot thank them enough for humbly going out of their way to entertain us and make us laugh by making themselves look like fools. And we would be remiss if we did not single out the S.A.L.T.Y. Hands club and Mrs. Annmarie Chalmers for putting on such a memorable and fantastic show. Finally, thanks to the Brewster community for coming together and raising awareness for CF.

If you had a great time at the Mr. Brewster Pageant last Friday, come out and support the BHS S.A.L.T.Y. Hands Club on Sunday, May 21st at 9:00 am at the Great Strides Walk for CF at the Lyndhurst Castle in Tarrytown, NY.