Special Report: Direct From Delaware The Election is Called! 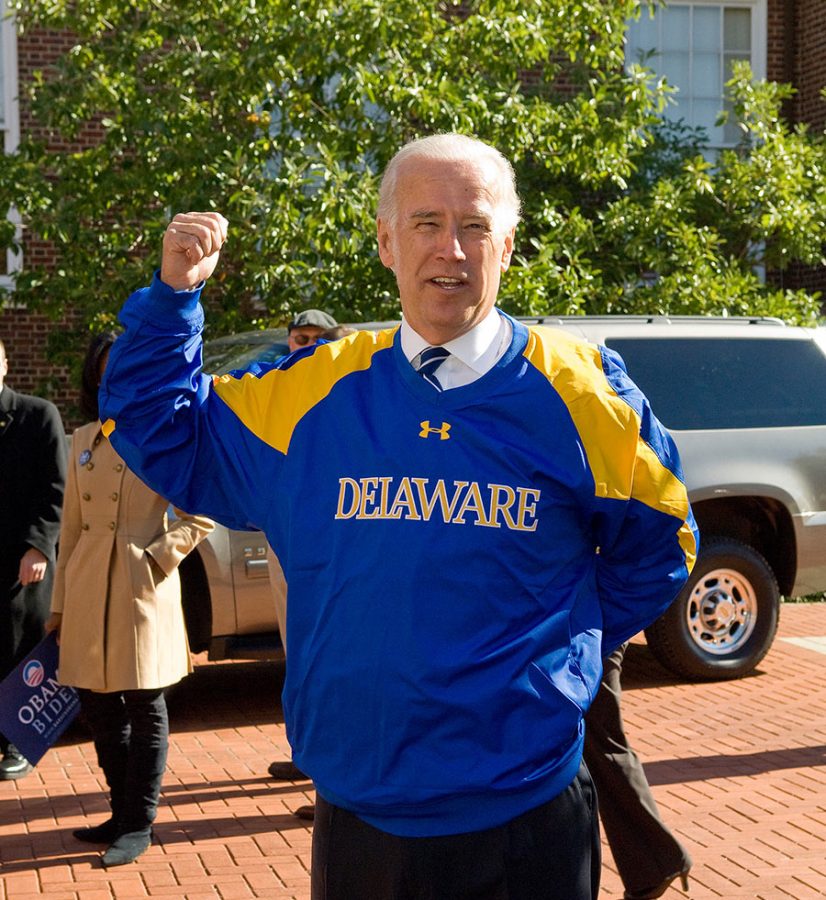 Back in 2008: Joe Biden sports Blue and Gold while campaigning for vice president at UD. (Photo courtesy UDel.edu)

President-elect Joe Biden graduated from the University of Delaware in 1965. He double majored in political science and history and served as class president his freshman year. He also met his current wife, Jill, at UD. He has spoken at multiple commencements, and is an active member of the UD community. In 2018, he said, “I’ll always have a special place in my heart for the University of Delaware.”
As UD students, having a Blue Hen in the presidential race definitely encouraged all of us who are members of the UD community to be more politically active. There were campus-wide reminders to vote, and we were given election day off. Professors were doing everything they could do to help, from pushing back due dates to sending out daily reminders to ensure that their students had the opportunity to vote. This was already such a monumental election, but UD students felt as if the presence of an alumnus was a call to us for action.
Many students were extremely vocal about their political views whether or not they supported Joe Biden. Evan Centofanti, a freshman at UD, said, “During the days leading up to the election, there was a strong influence on campus from both sides of the political spectrum. Whether it be a Trump rally down Main Street or more Instagram stories for Joe Biden, everyone was voicing (his or her) side.”
As election day got closer, excitement turned to fear. Major cities prepared for riots and looting, and the idea that there could be violence on our campus became more and more real. People living on or around campus, like myself, became increasingly worried about what would happen if Biden won. Having him as an alumnus put a huge “X” on our campus, especially with buildings like the Biden Institute and the Joseph R. Biden School of Public Policy.
A few days before election day, a Trump “parade” took place in Newark, DE, the small town that is mostly made up of the UD campus. Trump supporters flew flags out of their car windows and drove on some of the main roads on campus, yelling at pedestrians and blocking traffic. This event was a turning point for us where many students realized that no matter the outcome, there was a potential for things to escalate. By the time election day rolled around, the anxiety on campus reached an all time high. “Campus was very quiet that day. Everyone was worried about mass protests and riots; everyone kind of isolated that day and didn’t leave their homes,” said Centofanti. 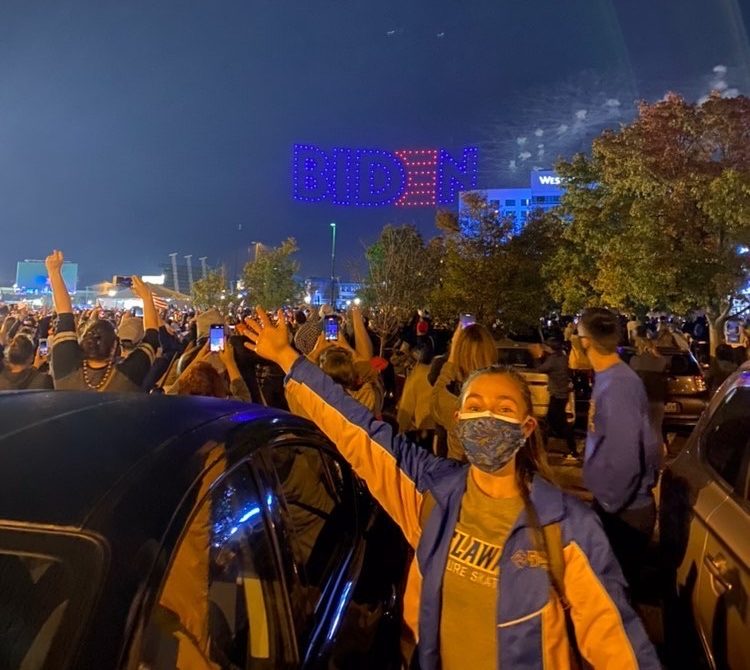 Waiting for results over that five day period was grueling, and everyone was on edge. No one knew what to expect – should we go about life as usual or prepare for the worst?
Everything led up to Saturday, November 7th – when it was announced that Biden won. There was an overwhelming sense of pride on campus. Students on both sides of the political spectrum came together to congratulate Biden on his victory. Across campus and social media, members of the UD community displayed their UD pride through cheers, images, and UD apparell. The general consensus was, “It’s a good day to be a Blue Hen!”
Biden delivered his victory speech on Saturday the 7th in Wilmington, Delaware – only 25 minutes from the University. Thousands of Delaware locals and UD students flocked to hear President-Elect Biden and Vice-President Elect Kamala Harris speak. Biden thanked Americans for the win and talked about his plans to unite the nation and ease tensions between the political parties. His speech was followed by a dazzling light show that included drones and fireworks. Natasha Gurevich, a senior at UD, said about her experience at the rally: “I remember…feeling so much happiness. Despite keeping our distance from the big crowd to stay safe, the communal joy and connectedness that I felt in that parking lot was unlike anything I’ve experienced before.” For her, the light show was the most memorable. “It was so exciting! There were so many people wearing their Delaware blues.”
I’ll always remember how I felt during this election. The uneasiness on election day, the stress while awaiting results, and how thrilled I was when a UD alumnus won. Just like many other UD students, I feel an exorbitant amount of pride about the outcome of the election. A fellow Blue Hen was elected, and I couldn’t be more honored. Many people associate the presidency with elite Ivy League schools, so it’s refreshing to see a more accessible school represented in the White House. Regardless of political affiliation, having a president-elect alumnus gives our school the recognition it deserves.

Sarah Durante graduated from Brewster High School in 2020 and is currently a freshman at the University of Delaware.