Male Abuse of Power in the Workplace: An Examination of an Epidemic 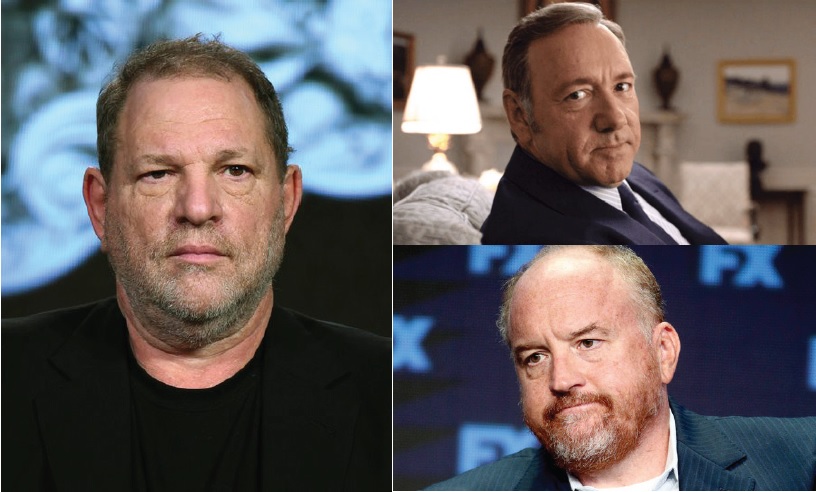 Clockwise from left, studio mogul Harvey Weinstein, actor Kevin Spacey, and comedian/actor Louis CK have all had various sexual and abuse of power allegations leveled against them in the recent months.

A significant portion of male society is driven by the desire for power – the ability to have control or influence – over their own lives and the lives of others. However, this definition of power is regularly misconstrued, leading to perpetual incidents of abuse.

Recently, major news networks have covered a staggering number of men and women, themselves victims of such abuse, speaking out against figures of authority. These issues have occurred on a national level with the President himself, to local problems here in Brewster, which collectively demonstrates a major societal dilemma.

We have seen men such as Harvey Weinstein get away with acts of sexual, physical, and emotional abuse for years. Yet somehow, it has taken until 2017 for a victim to step up and come forward to tell her story. The catalysts of the “#MeToo” movement are years after the fact, years too late. Yes, this action of stepping up and speaking out takes incredible courage and will hopefully liberate many people from the pain this abuse has caused, but many of us are asking, “Why wait until now?”

Each case of abuse comes with its own circumstances. But the consequences never vary: the victims are traumatized. This trauma stops victims from easily sharing their stories of abuse: they are embarrassed and don’t want to receive further victimization from society; the media attention is daunting; their stories will be questioned as truth. For the rest of their lives, the abuse will define the victims. This issue is exacerbated when a celebrity is involved. The attention is amplified and the victim is put square in the eye of a judgmental public. Understandably, many choose not to relive the suffering and keep the pain to themselves.

What should a victim do? There is no one right answer.

But there persists one question: how did people with such little regard for others obtain so much power?
Could it be the fact that members of society have allowed the wrong figures to achieve such prominent status? If so, the dilemma facing us now is, how can this problem be resolved? We cannot simply restructure society at this point, as the majority of the abusers have earned their power. One cannot tell whether these people will make choices similar to those of a Kevin Spacey or an Anthony Weiner. We cannot easily determine whether these actions were isolated mistakes or the result of habitual and established character flaws upon which abusers will continue to act.

In the case of Harvey Weinstein, it is our opinion that he is simply a bad person. He has gotten away with self-righteous and maligning acts on numerous occasions and refused to attempt to modify his behavior until he was caught. It appears that many people in Hollywood were aware of his behavior yet refused to get involved or speak up. In other cases, some personal to our school, it is clear that the justice system and our established laws with due punishment don’t deter the abusers.

In order for people in positions of societal power to amend their ways, stricter action must be taken. Exposing these predators is suddenly pervasive and we wonder if this will lead to a change like society has never seen before.

We have yet to see the extended effects of this trend, of the “#MeToo” movement. There are likely to be more well-known figures taken down by investigated accusations. Some may be our childhood heroes who will be exposed as anything but heroes. If the allegations leveled against them turn out to be true, their actions are inexcusable, as celebrities and public figures have an obligation to the public who has given them this status. Celebrities and public figures are given tremendous power to influence the world.

There is so much good that can come from their influence, but they have the obligation to use their influence only for good and not for personal gratification.

Will “#MeToo” reduce the abuse of power? Most likely no, but hopefully, the wrongdoing is more easily talked about and abusers will be swiftly punished. Just as importantly, those figures who find themselves in powerful positions will think seriously before committing any act that is an abuse of their power.