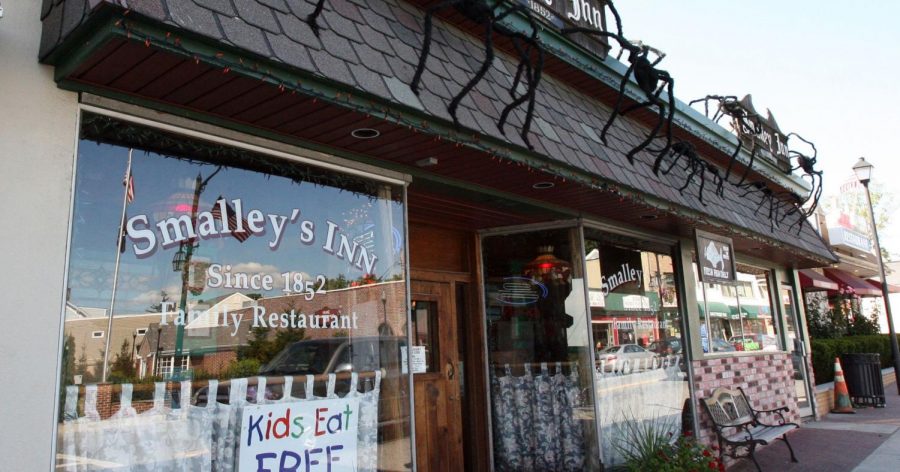 In Carmel, New York, resides a tavern and restaurant known as Smalley’s Inn. The inn originally opened in 1852 by James Smalley. In 1924, the inn was consumed by a fire that damaged several buildings on Carmel´s main street. In 1974, another fire struck the area and damaged the building once more. It was rebuilt, and today, Smalley’s Inn is an Italian-American restaurant owned by Tony Porto.
Smalley’s Inn has gained quite an extensive following as one of New York State’s most popular and legendary haunted locations. The owners have granted many interviews and have allowed ghost-hunters access to the building in order to learn more about the spirits who reportedly reside within the restaurants walls. And it is their stories to tell as well as the lingering lore about Carmel´s most famous restaurant.

Founder, James Smalley had held positions other than the owner of the inn. He was Carmel’s sheriff, treasurer, and coroner. As coroner, he used the basement as the town’s morgue. This may begin to explain the eleven other ghosts who have been frequently noticed by staff, customers, and ghost-hunters alike.

Among the souls said to wander the halls of Smalley´s is the spirit of Elizabeth Smalley, the daughter of the original founder. She reportedly died as a toddler – the cause of her death uncertain – but is purported to be linked to a suspected violent crime. The grave of a small girl, allegedly that of Elizabeth Smalley, was found in the basement of the inn.

Many of the female ghosts were linked to Elizabeth Smalley, while some of the male spirits have historical pasts. Tony Porto has reported that one of the male spirits is an American Revolutionary soldier, an idea suggesting that the restaurant has been haunted since some time in the late 1700’s.

These collective lost souls have made Smalley’s Inn their home for centuries. The current owner and various (past and present) staff members report experiencing supernatural events over the years. Professional ghost-hunters such as the Hudson Valley Paranormal Investigators (HVPI) have visited Smalley’s to observe alleged spirit activity. HVPI’s mission is both to observe and verify the spirit presence as well as to help the spirits find rest in the afterlife.

HVPI uses Electronic Voice Phenomenon (EVP) which are recorded sounds that are difficult to identify. EVP uses various kinds of recorders, strobe lights, EMF (electro-magnetic frequency) monitors, thermometers, and infrared camcorders to record the activity at the inn. HVPI eventually communed with the spirit of young Elizabeth, who told them about her fear of moving on. The group eventually left Smalley’s Inn, but the hauntings have not stopped. Some recorded EVPs which include unintelligible whispers, barking, and growling. Many individuals have reported feeling poked or having their clothes tugged on by unseen hands. Images of black masses or transparent figures have been seen and photographed, providing more tangible evidence suggesting the presence of the supernatural.

Some of the stories are difficult to explain. Once, during a busy night at the tavern, every phone in the building was called by the same number: the restaurant’s phone number. Another story connects to the playful nature of Elizabeth Smalley, who enjoyed playing hide-and-seek from behind one of the pillars inside the basement. On another occasion, in an attempt to build a sports bar in the basement, Mr. Porto contracted a construction firm. Elizabeth Smalley’s spirit, whose repeated attempts to peek out from behind one of the support beams, scared them off. Her continual presence also frightened off two other contractors. No sports bar was ever built after that.

These stories brought fame to the restaurant and to its spiritual inhabitants, causi

ng curious ghost-hunters to frequent Smalley’s Inn in their attempts to speak with the long dead souls. The widespread fame of these specters resulted in a production of an episode of the Dead Files on the Travel Channel; the episode was called A Banshee’s Cry. The hosts of the show, Steve DiSchiavi and Amy Allan, used their skills as a former NYPD homicide detective and a physical medium, respectively, to solve reported paranormal problems. The two hosts ended up having conflicts with the resident spirits haunting Smalley’s, which didn’t help to resolve any of the ghosts’ restlessness or their status on earth.

A Banshee’s Cry was just one more attempt to solve the centuries-old mystery of Smalley’s Inn, a home for both the living and the long departed. Who knows what the future holds in store for the oft haunted inn…but I’ll bet the stories passed on about Smalley’s will be long remembered after the building itself may be forgotten.

A special thank you to reader Ms. Dorothy Campbell for her letter, suggesting Smalley’s for this column.