My Dad’s Got Talent 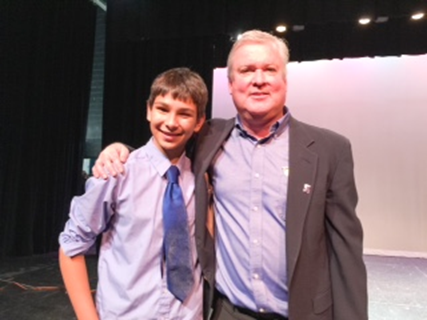 Since 2015, the Brewster Education Foundation has sponsored a talent show with a variety of performances by members of the Brewster community. The performances range from tap dancing to singing to playing a variety of musical instruments. Held at the Brewster High School Performing Arts Center, the talent show is a way to represent Brewster as a whole and positively broadcast the individuality of our community. The show consists of 15-20 performances of all different ages. The winners are split into three categories: students from JFK to Henry. H. Wells, students from Brewster high school, and anyone past high school. Out of these three winners, the grand prize winner is chosen.

On January 20th, the third talent show was held. Twenty acts were performed to loud applause and cheering after each act concluded. It wasn’t just the lights that illuminated the stage as each of the brave acts broadcast their unique abilities. The winners were John Delgado, a dancer who won in the high school category with a dance he choreographed on his own; Kristen Huttunen, a 2013 alumnus of Brewster High School who won the adult category, singing her heart out to the song “Simple Man “ by Lynyrd Skynyrd; and youngest category and also overall winner, Riley Krisch, whose piano rendition of Queen’s “Bohemian Rhapsody” wowed the crowd.

It was an honor to interview the man who inspired the show, my dad, Joseph Cavanagh. As the chairman of Brewster’s Got Talent, he spent months planning the show, getting all the acts together and working hard to make the show fun in the eyes of the performers and audience.

What inspired Brewster’s Got Talent?
I spoke to a friend in New Jersey whose local high school did “Morristown’s Got Talent” and I thought it would be great for Brewster since we have a lot of talented people.

What were some of the highlights of the night?
John Delgado was a highlight. Spotlight Arts had a talented eleven person acapella group singing Hallelujah by Rufus Wainwright. Two of the eleven performers were our past two winners, Annie Sullivan and Martina Rossi. Riley Krisch enlightened all age groups of the audience.

Do you get stage fright?
No, I come well prepared with notes for all the acts and try to get to know them better before the show so I can describe them as genuinely as I can. The show allows me to use my two communication degrees and not put them to waste. I do this in order to make the show positive for the performers and fun for the audience. I’d personally like to thank Mrs. Chalmers and the Stage Crew for doing a wonderful job in making the show run smoothly and technically correct.

What inspires you to keep doing the show?
It’s uplifting to see people performing on stage for the first time, and it’s a really great show because it opens them up to a new experience. It’s also a great opportunity for teachers to see their former students and see not only the great performers they are but the great people they became. Brewster’s Got Talent is more like “Brewster’s Got Great Students.” All of our performers are not only exceptional performers but exceptional people as well. The big part of the show is that it’s a fundraiser for Brewster Education Foundation so people use their passion and hard work for a good cause.

How much money did you raise?
We raised over $7,000 selling tickets and food. All proceeds go to the Brewster Education Foundation to help fund grants and scholarships.

What would you improve?
I would love to have more variety such as: jugglers, comedians, really anything to spice the show up a bit more. I also wish that more of the high school community would come and support the show.

Does Brewster actually have talent?
We indeed have a lot of talent and I hope we will be able to recruit new and diverse acts in the upcoming years. I must add that I feel very fortunate to have had all my children grow up in such a beautiful community, and to have my two sons graduate Brewster High, and to have my daughter graduate this June.

Author’s note: I feel very fortunate to have a father who works so hard to make sure everyone involved is happy. Thank you, Dad, for creating such a fun event and keeping it going for 3 years now.