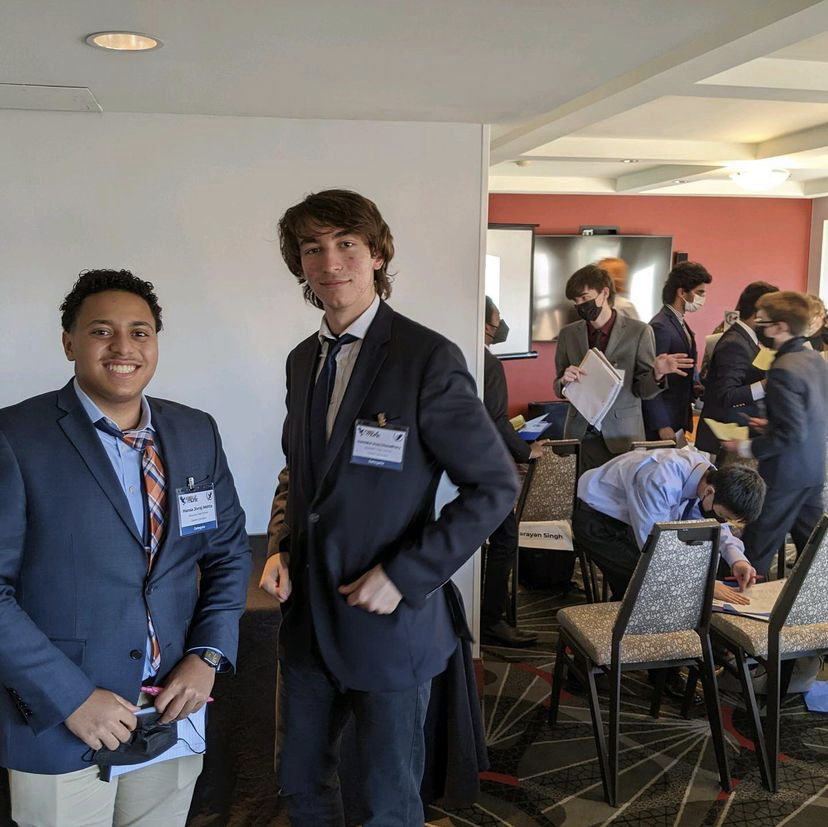 After two years of online conference, Model United Nations is finally back in person! From April 1st to April 3rd, 20 delegates from Brewster’s Model UN Delegation attended Boston College’s annual conference. For their first travel conference in over two years, delegates visited Boston to participate in EagleMUNC 10, a conference run by Boston College. The conference, which was held at the Westin Copley Hotel, had over 40 hours of committee sessions for delegates. With over 400 delegates at this year’s conference, these delegates got a chance to use their problem solving skills in real life situations. This year’s theme was overcoming adversity through innovation. With this in mind, delegates worked together to solve problems in all committees. Although not every plan worked, it’s clear that fun was had by all.

Spanning three days of debate, delegates finally had the opportunity to work together in person to solve problems such as climate change in the Arctic Circle and an unstable political climate in post French Revolution France. Committees included General Assemblies, Crisis Committees, and Hybrid Committees with another four hundred delegates. The committees included the United Nations Security Council where delegates were able to work through and debate problems such as Brexit and the conflict in South Sudan. International Crime Police Organization which worked to halt drug operations and cyber crimes, and the Old Kingdom of Egypt where father, grandfather, and son all worked together despite not being alive all at once to name a few. Brewster delegates were joined with delegates from Los Angeles, Boston, and Rhode Island to name a few.

Director of Operations Owen Lennon, who had a major role in planning Brewster’s role in this conference, said, “Model UN is all about overcoming obstacles through collaboration and compromise. It took a lot of collaboration between the club, the district, and the students of Boston College to make this trip happen for us, and I’m so happy that we were able to go and have a wonderful time.”

This conference marks the first overnight field trip, but it wasn’t easy getting here. In collaboration with the Board of Education, Model UN worked to ensure a safe and fun experience for their delegates this weekend. For many of the delegates, this is their first travel conference and it did not disappoint. For those who this was their first conference, it was both exciting and overwhelming. Sophomore Sarah Vaughn said, “EagleMUNC was a great end to my first year in Model UN! Acting as a representative from the CDC to tackle an Ebola outbreak was stressful, but a lot of fun and worth all the work put into it. I had a great time working to resolve the outbreak and meeting delegates from other delegations.” Overall, this experience was clearly rewarding for all delegates who attended and it’s thrilling to finally be back in person!