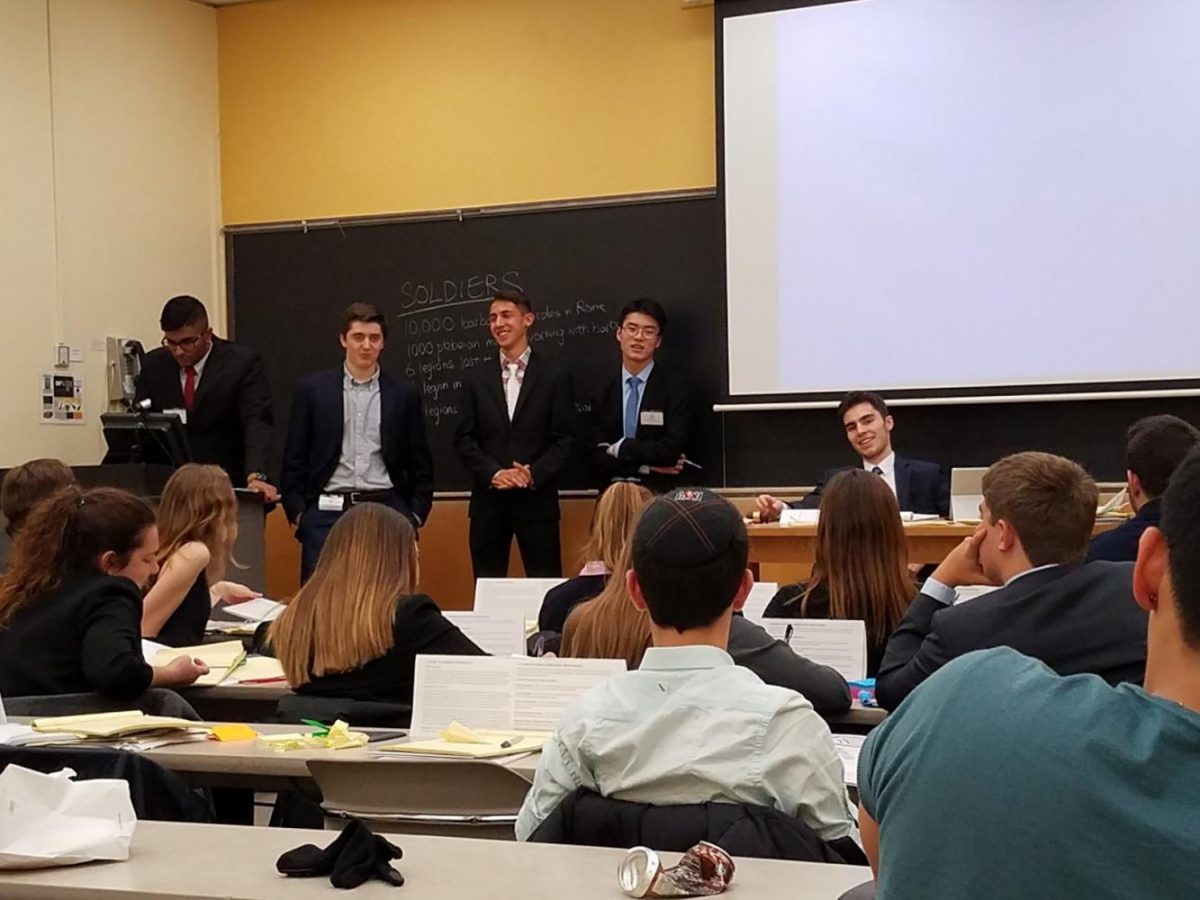 Brewster students argue passionately in front of their peers regarding matters of delegation and policy.

On January 12th through the 15th, 20 members of Brewster’s Model U.N. attended the 16th annual Columbia University Model United Nations Conference Exposition. A conference that this year brought together approximately 800 high school students from around the globe together to participate in 29 committees on topics and time periods ranging from the Trojan war in 1200 BCE, to a modern day ocean summit committee. All 29 committees were considered ‘crisis’ committees, which adds several variables to the usual debate format.

First, there is a team of Columbia college students watching the conference whose entire job is to make the delegates’ job harder by periodically adding new issues and emergencies on top of the old ones at very inopportune times. They can also force us to drop any issue we are currently working on to talk about these new events and set a time limit to come up with solutions to any problems caused by the sudden shift. If we don’t come up with a plan fast enough, consequences could include even more emergencies and loss of power.

If, for example, they announce that a terrorist cell has taken over our embassy in a foreign country and we don’t make a plan to fight them fast enough, then the embassy might get destroyed making us lose support from that country’s government. Secondly, in crisis committees, all delegates have the power to make private actions that the rest of the delegates don’t know about.

Delegates are free to pursue personal objectives and goals separately from the main goal of the committee, usually gaining more wealth or power. Delegates are allowed to undergo any kind of move to further their own power no matter how immoral, illegal, or dangerous. This could range from simple investigations or secret business deals, to kidnappings and murder. We can take out any political enemy in our way and steal whatever we want or need. We just need to be able to put our plan into writing. Crisis adds another layer of complexity to the committee as nearly every delegate pursues a personal agenda and takes out opponents, even as they are working to accomplish a common goal. It isn’t just about achieving the main goal of the committee; it’s about achieving it in a way that benefits the delegates.

All 20 of us entered a different time period in each our conferences with as many personal goals as collective ones, with varying degrees of success and chaos. My committee was the IRA war council where my job was to gain independence for Northern Ireland from Great Britain, via any means necessary. Our position was not ideal; we had 2,000 volunteer fighters, 500 guns, no foreign support, and while the British had 23,000 soldiers, several hundred of our supporters and leaders had been arrested, and two entire towns were on fire when we arrived. We immediately sent first responders to the burning towns, who were promptly arrested by the British. Our new plan was to buy arms from abroad (America), break our people out of prison, and build up our armies before going on the offensive. The plan went astoundingly well: we broke open prisons, attacked storehouses, captured an embassy building filled with British personnel, kidnapped the daughter of the British ambassador (turned out he didn’t care), and established a few towns as our territory. This succeeded in enraging the British government, and very little else. The British raised an additional 25,000 troops and threatened to invade our island and burn everything that didn’t have a British flag on it to the ground. To save ourselves, we were forced to murder two members of our own committee and blame everything on them, then claim that we were a new organization who wanted only diplomatic solutions. They actually accepted this. In the end, I and two other members of the committee campaigned for and won seats on Irish parliament after all of my competitors for the position mysteriously died leading up to the election (the police ruled them accidental; it was no one’s fault). With seats on parliament our committee was able to gain legitimacy and enough domestic and international support to force Britain to the negotiating table. We successfully convinced the British to give us our official independence and slowly remove their troops over five years, as they could no longer just invade us without angering the United Nations.