Why I’m a Dallas Cowboys Fan 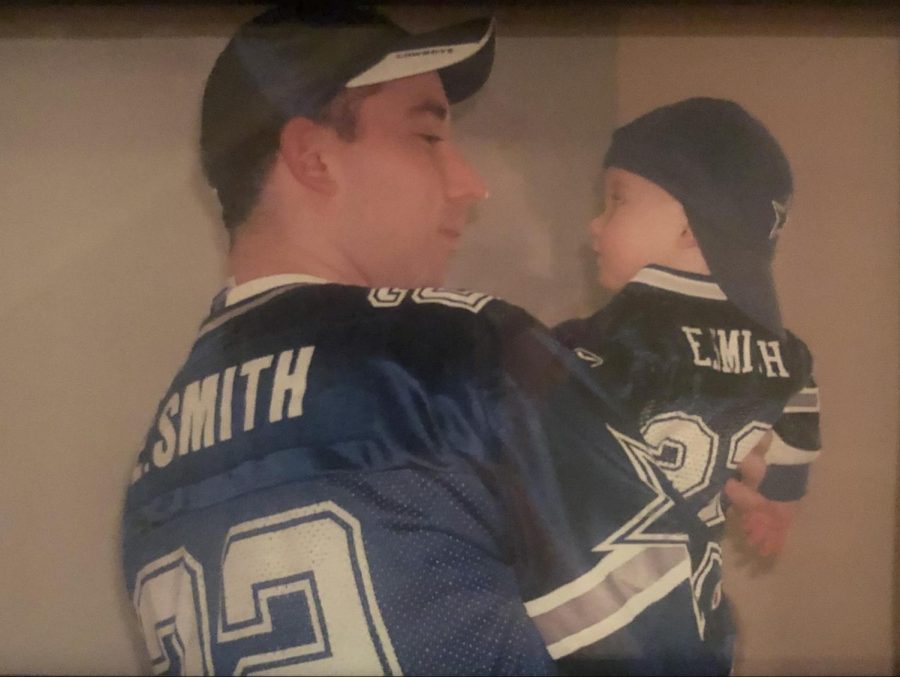 “WE DEM BOYZ!! WE ARE GOING TO THE SUPA BOWL!” is what I scream every time Ezekiel Elliot rushes for a touchdown or Dak Prescott makes an amazing throw. There is a rush that flies through me whenever I watch the Cowboys play.

I always get asked, “Why are you a Cowboys fan and not a Giants fan?” As any Cowboy fan knows, the proper response is, “Cause the Giants suck.”

But in thinking further on that question, I want to answer with my real reason. People assume it’s because of those Dallas Cowboy Cheerleaders. Well, that is part of it, but there’s another reason.
I’ve been born and bred a Cowboys fan. Since he was a kid, my dad became a Dallas Cowboys fan. When he was eleven, his dad took something away from him as a punishment. My dad got mad and retaliated. He said, “Then I’m rooting against the Giants tonight! I’m gonna root for that team – the Dallas Cowboys!” The team he was pointing to had big blue stars on the sides of their silver helmets…and my dad never went back.

I remember being in our living room, sitting there with my dad, cheering for the Cowboys. I didn’t know much about what was going on, but after I got to know the game better, I was hooked. My dad and I would discuss what plays Dallas should and shouldn’t do, should have and shouldn’t have done. Most of the time they didn’t do what we thought they should have, and most of the time it works out for them.

Tony Romo – Cowboy’s quarterback 2003-2016. Watching Romo dictate the offense was just mesmerizing. He instantly became my favorite football player after he lead the team to a huge win over the New York Giants. I couldn’t believe the way he read the defense and always found the right guy – even in the worst scenarios. It was so exciting to watch. He was the key to the Cowboys’ success then, because whenever he was hurt, Dallas always lost. I remember in 2015, Romo played only three games for the Cowboys before getting hurt. Dallas won those three games and lost the next seven. Romo came back for one game and we won that one, then he got hurt again and we lost the rest of the season. He was that important to our offense, and as a Cowboys fan, it sucked not watching him play. In 2016, Romo had a devastating collarbone injury which kept him out for the whole season. My dad and I, like every loyal fan of Cowboys Nation, were really upset. But from bad always comes good. And good it is…

A young stud of a quarterback who has been having a great season since he was drafted, is Dakota “Dak” Prescott. A monster of a running back, who has been insane since he was drafted, is Ezekiel Elliot. And just recently, Dallas added Amari Cooper into the mix. He is a gifted young star receiver. Oh man, Cowboys football was back – and it was fun and exciting to watch.

Now, about the Cowboys-Giants rivalry. There’s just something about those games. Could it be the fierce hatred they have for each other? You can feel it when they play. Or, is it more about the fan bases that loathe each other? The games between the Cowboys and the Giants have always been exciting matchups – a contest of football royalty and grittiness from two evenly matched teams. (Although in recent years, it’s kinda been a little lopsided in the Cowboys’ favor.)

But every time these teams play, I love the tension between me and my Giants fan friends. We trash talk each other all week leading up to game day. On game day, I sit back and wait for when the Cowboys put a smackdown on the Giants. These games are incredible to watch. You gotta know Cowboy Nation looks forward to that game – America’s game.

The Dallas Cowboys (5-3) faced off against the New York Giants (2-7) on Monday, 11/4, in Metlife Stadium. In the first quarter, the Giants came out with a purpose and to make some noise, intercepting Dak Prescott on the first play of the game to set up a field goal try for Giants. The Cowboys marched down the field to tie it up at 3. The Cowboys had a sluggish 1st half as the Giants defense held their own against the potent Cowboys offense. To end the half, Brett Maher (kicker for Dallas) nailed a 54-yard field goal to give the Cowboys a 13-12 lead. And then, Joe Tessitore screamed into the mic, “He is gonna go all the way!” as a black cat ran onto the field and into the end zone for a TD. Giants fans correctly read that black cat as an omen of bad luck. The second half began and DEM BOYZ conquered. Ezekial Elliot and Dak Prescott took over. Zeke ran for a total of 139 yards, while Dak threw 3 touchdowns and had over 270 yards thrown. Cowboys defense showed up racking up an interception, 2 fumbles recovered (1 for a touchdown) and 5 sacks of the Giants QB, Daniel Jones. DEM BOYZ are just getting started and a Super Bowl is in sight.