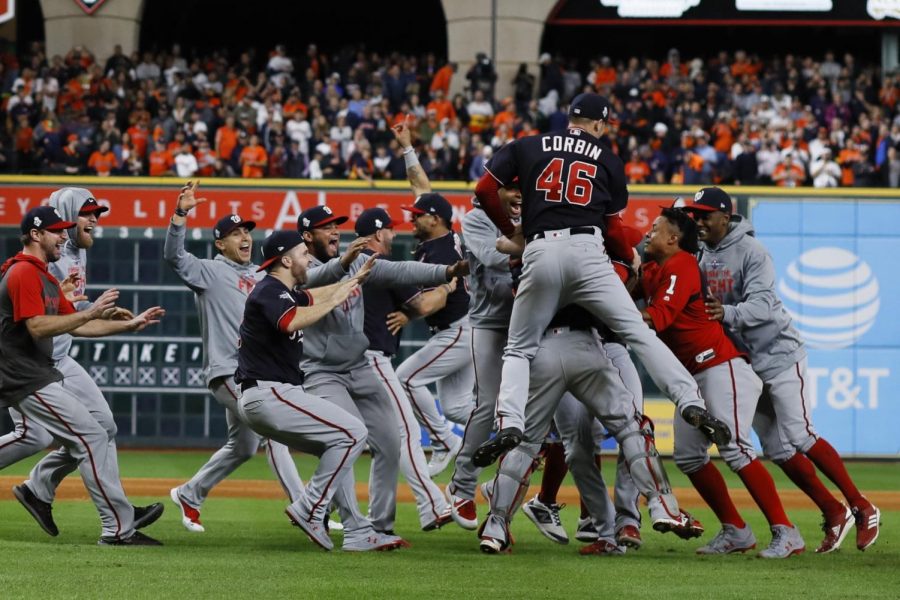 Once again, I can’t write about the Yankees winning a World Series in a New York-based paper. Oh well, so much for writing an article like this about the Bronx Bombers…But is there a more interesting story this time around? Yes, yes there is.

The Nationals snagged the first wildcard spot after going 46-27 in the second half of the 2019 MLB season. They hosted the game (against the Milwaukee Brewers, who had made it to the NLCS last October), marking the first time that the Nationals had been in a wildcard game. The Nationals won the game 4-3 after an 8th inning surge when three runs scored (No, I won’t talk about the Brewers’ right fielder), giving them the lead that they would keep through the final three outs in the top of the ninth. This victory came from a franchise that had previously been 0–3 in winner-take-all postseason games.

Following the wildcard victory, Washington continued on versus the Los Angeles Dodgers in the National League Division Series. The Nationals had been to the post-season four times since 2012 (2012, 2014, 2016-17) and had yet to advance past the divisional round. After both of the teams traded wins throughout the first four games, the Nationals were back playing against Milwaukee: a winner-take-all game. This time, on the road, however. Washington pitted Stephen Strasburg against Walker Buehler. The Nats offense mustered only one run as Buehler left the game with 6 ​2⁄3 innings, one run on four hits, three walks, and a hit batsman to go with seven strikeouts. Enter Clayton Kershaw. While Kershaw has been a dominant pitcher for most of his career, he had constant struggles in October. Could Kershaw finally overcome his October woes? Could he propel his team to the NLCS and a probable third consecutive World Series match-up? I guess that’s something we can only dream about. Back to reality, Kershaw went on to give up back-to-back home runs off of Anthony Rendon and Juan Soto, which tied the game at 3. Better luck next year, Kersh. The game followed into extras, when, in the 10th inning, the Nationals found themselves with the bases loaded and former Dodger, Howie Kendrick, up at the plate. Facing Joe Kelly, the unthinkable happened: Kendrick hit a grand slam to give the Nats a 7-3 lead. Closer Sean Doolittle sent the Washington Nationals to their first-ever National League Championship Series (at least as the Nationals; they had been in the CS as the Montreal Expos in 1981).

After a convincing game 5 win in LA, the Nationals matched up with the St. Louis Cardinals, with the winner representing the National League in the 2019 World Series. Having studied the Nationals’ past postseason appearances, I might have thought that it would have been a close series. Boy, was I wrong. The Nationals swept the Cardinals in four games. Strong pitching held the Cardinal offense led by Marcell Ozuna. Anibal Sanchez, Max Scherzer, Stephen Strasburg, and Patrick Corbin would each get the victories. Throughout the four games, Washington outscored the Cardinals 20-6. The NLCS MVP went to Howie Kendrick.

After taking a short break as the ALCS continued, the Nationals traveled to Houston to take on the Astros in the 2019 World Series. To sum up what happened throughout the World Series, ironically, home field advantage meant NOTHING. The Nationals won the first two games at Minute Maid Park, scoring 17 runs compared to the 7 produced by Houston. What followed there was 3 consecutive losses at home, where the Houston offense woke up, and the Nationals’ offense faltered. Traveling back to Houston, the Nationals were right back where they started: playing must-win games. The Nationals offense re-emerged from the dead and scored 7 runs to force a game 7. They would go on to win game 7 in Houston to become World Series Champions. The World Series MVP went to starting pitcher, Stephen Strasburg, noting the first time where a No. 1 Overall Pick earned the honor.

If I learned anything from this postseason it was this: “It’s not how you start the season, it’s how you finish. If you wind up helping the team make the playoffs, that’s what you play for. You don’t play to put up your numbers, but to try to get a chance to make it to the World Series.” – Cal Ripken Jr.