Sometimes, the winners really do get the other team’s GOAT 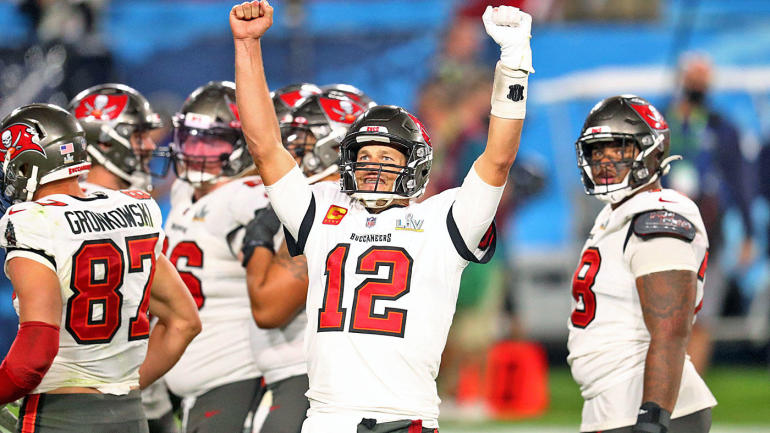 Tamp Bay quarterback Tom Brady raises his arms in celebration, enjoying an increase in the number of Super Bowls he has won.

This year was the year for adjustments, reflection and revisions. We saw this not only politically, socially, economically, but also within our sports. On the opening day of Tom Brady’s 10th Super Bowl media day (the most of any player) he looked out to see a crowd of Zoom reporters. Thirty reporters, now with a deeper understanding of the virtual learning world, waited with their hands raised on computer screens while Tom Brady sat alone. There were many changes from last year’s Super Bowl, with this year’s Zoom conferences being only the tip of the iceberg.

As COVID regulations limited the football season not only in the amount of games played but also with the number of fans in attendance. The major economic influx that usually surrounds a Super Bowl town was now barren. That is not to say those fun celebrity run-ins and drama went without, as we will all remember Tom Brady throwing the trophy from one boat to the other.

Patrick Mahomes and the Kansas City Chiefs looked to take on the Buccaneers in their second Super Bowl appearance in two years, an amazing achievement in itself. If you are unfamiliar with football, you may not have heard this name before. Many on the inside consider him a modern Michael Jordan of sports. In just his third year in the NFL, he has a Super Bowl win, a Super Bowl MVP, and a regular-season MVP. If he retired from football tomorrow, he would be a first-ballot hall of famer. He is clearly one of the most talented players to ever play the game, a real generational type of talent. No one can do the things he can do, and we all saw this skill with his many acrobatic throws in the Super Bowl.

However, although Patrick Mahomes may be revered as the best player, Tom Brady is the GOAT. With his seven Super Bowl wins and five Super Bowl MVPs, he is the undeniable greatest of all time. Tom Brady has won more Super Bowls than any other franchise in the NFL. Brady is his own franchise at this point. During his long campaign, he switched teams which shocked the world. His previous six Super Bowls were with Bill Belichick and the New England Patriots. After some hard feelings, the now 43-year-old Brady decided to take his talents to Tampa Bay.

While great players help the team win, it’s really the education and commitments of the coaches that change the tide. The Kansas City Chiefs were favored to win the game, but against all odds the Buccaneers won in blowout fashion. (Many said that the Chiefs did not have much of a chance going into the game; they were out two of their starting offense of lineman, resulting in Mahomes running for his life most of the game.) While Tom Brady brought the experience to the game that no one else had which gave them the edge, it was really the understanding of the Chiefs offense and preparation of Tampa’s defense that secured the game.

During the game, the Chiefs looked scared and stricken. Their untouchable offense had been reviewed, broken down, and counter-balanced. For those non-football players out there, think of the scene from any football movie where the coaches and players watch game footage and create a strategy to counter the offense. Earlier in the season, the Chiefs beat the Bucs 27-24. Tampa Bay was prepared the second time around, shutting down Kansas’s offense throughout the game. We all know that it is really hard to win without an offense.

The Chiefs came out to a hot start in that first game. Tyreek Hill, an all-pro wide receiver for the Chiefs, had 200 yards receiving and two touchdowns in the first quarter and ended up with 269 yards receiving at their last match-up. So, Tampa Bay took a different approach to this game: in the Super Bowl, Hill had only 73 yards. By taking Tyreek Hill away, the Bucs sealed their victory. They had pro-bowlers all over the offense including Chris Godwin, Antonio Brown, and Mike Evans. Leonard Fournette (running back), who was a question mark coming into the season, had a great game. The Bucs kept Mahomes off the field by eating up the clock and running the ball. Bruce Arians and the Bucs’ coaching staff should take most of the credit for a great game plan.

After this win, Tom Brady will most likely go down as the most winning quarterback in NFL history. If Mahomes can withstand the pressure, he will be the only quarterback that may be able to catch up to Tom Brady’s resume.