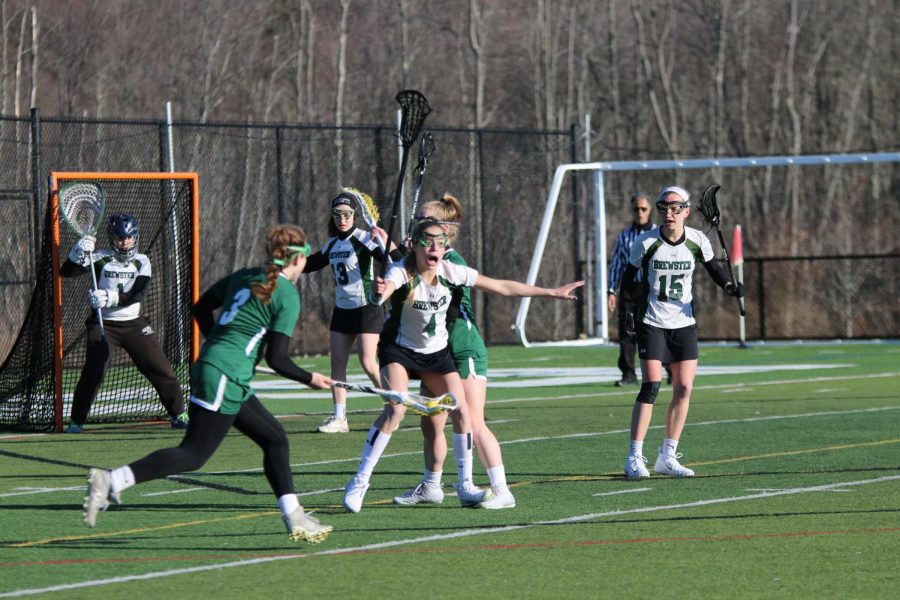 All recaps are as reported by team captains.  Bear Facts makes every effort to contact any and all captains; any omission is therefore not the responsibility of the news staff.

Men’s outdoor track and field has had several stand-out performances from athletes. Sophomore David Alade ran an incredible 800 meter time of 1:59.37 to place himself tied for 17th in Section 1. Jason Whitehead also had a great season running Brewster’s season best for the 400 with a time of 52.17 to place him 4th in the Northern County Championships and 32nd in section 1 for the 200. Sophomore Finn Ratajack ran an outstanding 9:53.75 in the two mile, and complemented it with a mile time of 4:45.38. 8th Grader Patrick Ford ran a 9:54.23 in the two mile and 4:45.86 in the mile, making Pat the second fastest 8th Grader in the Nation for the 2 mile and the fastest 8th Grader in the State for the mile. Senior Ardit Berisha had a great season throwing shot put just over 45 feet to place him 10th in section 1 and discus 113 feet to place him 30th in the section. Andrew Woodstead continued to break his own hammer throw school record throwing a personal best of 120 feet, placing him 7th in section 1. Brenden McBride also had an outstanding season placing well at several meets and placing 19th in section 1 for triple jump and 9th in section 1 for long jump.

This season we had 130 athletes (boys and girls) sign up for outdoor track and field which is a great turn out and crucial to the success of the team. Now that we have the numbers, next year the team will work on improving their work ethic to translate that hard work into better team performances at meets and to try to gain a league title.

A solid year for the team who made it to the sectional quarters. Paul Catalano, Bobby McBride, and Nick Girard all received awards for All League and All Section. The group grew as a team and as individuals.

The boys are anticipating a strong future with their strong talent and are looking forward to great things next year.

Clarissa Cuomo was the runner-up in Section 1 and first in the league for pole vault. She set a new school record, jumping 10’9”. She was the first alternate to go to the state meet. Colleen Stapleton ranked first in Section 1, the team’s league, and Northern Counties for the racewalk. Florence Cuomo, Kennedy LaMoreaux, and Lila Peterson ranked 1-3, respectively, in Northern Counties for Steeplechase. Isabelle Wilson was League Champion in the High Jump. Florence Cuomo was League runner up in the 3000. Marissa Crowley was League runner up in the 800.

As a young team with many of the girls returning next year, they are very excited for the years to come. (…and for Cross Country. Everyone should try Cross Country!)

The boys lacrosse team suffered numerous injuries throughout the season but never failed to compete. With many of the injured players being on the offensive side, the defense was essential in keeping the team in games. The behemoth, Franco Milano, along with Jason Borsari and Billy Finn, led the defense. Malcolm Nordquist and Sam Lowe also made great contributions at the position of long-stick middie.

The best demonstration of the team’s toughness was shown in the first sectional game against Clarkstown South. Everyone was tired after the long bus ride, and the other team had home-field advantage. But despite being the underdog, they were able to tie up the score in the 4th quarter with a goal from Aidan Sheil. With less than 90 seconds remaining, Harrison Dignan (who had only been playing for a few weeks) found an open Cole Gianguzzi who scored the game-winning goal. This game had contributions from everyone: goalie Billy Finn saved 15 shots, Patrick Feehan had 2 goals and 2 assists, Bobby Conklin had 2 goals, and Chris DiBiase had a goal. After a season filled with curve balls, it was rewarding for the team to get a great win like this.

The team’s expectations looking forward are to return next year strong and motivated with the hopes of competing for the section title!

First year player Sean Ledley had a great impact and worked his way into the number two spot for the Bears this year. Jackson Mahoney shot a personal low (47). Brendan Fox also had a 47 this year. Aidan Strahley and Alek Reichelt both had nice rounds throughout the year including a few 45’s. Gavin Winkler made it to sectionals this year and shot a personal low of 34. The team saw tremendous improvement from Shane Daly and Terrence McArdle.

The Golf Team is losing four seniors this year: Lauren Knorr, Tyler Maloney, Brendan Fox, and Gavin Winkler. They will be greatly missed. Sean Ledley, Alek Reichelt, and Aidan Strahley will be a strong starting three for next year.

The team had 8 outstanding homers hit by Madison Chuidina and 1 by Caroline Cherubini. The girls had a great season thanks to the contribution of everyone on the team. They all gave 1000% every game. Michelle Marotta and Evelyn Prinz did a great job on the mound, while Elly Keefe was great behind the plate. It’s going to be tough next year without their three seniors, but they will come back even stronger.