Although only half a film, it’s a complete success 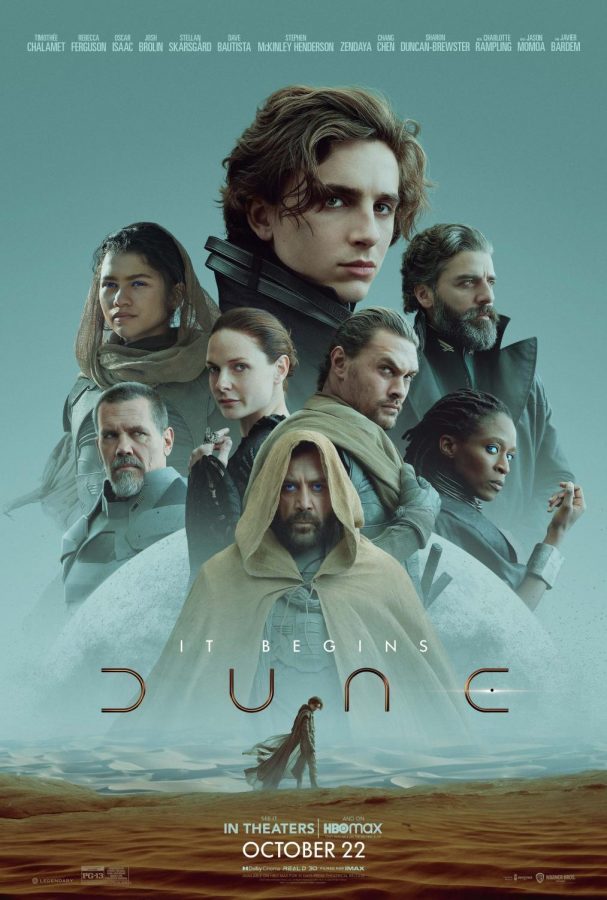 Dune is a 2021 movie directed by Denis Villeneuve and an adaptation of Frank Herbert’s classic sci-fi novel of the same name. The movie stars Timothée Chalamet, Rebecca Ferguson, Oscar Isaac, Josh Brolin, Zendaya, and several other great actors. Dune tells the story of Paul Atreides, the son of the honorable Duke Leto Atreides. After the Duke accepts his emperor’s request to govern the desert planet of Arrakis, the Atreides family must move to this new planet while a warring family attempts to destroy them. Of course, scheming ensues.
As someone who loves the novel, and as a big fan of Denis Villeneuve, I was very excited to see this movie. Overall, I really enjoyed it. The film is a worthy adaptation of such an important book.
The cast is great. Everyone really brings their best to the roles portrayed. The standout performance for me was definitely Rebecca Ferguson. Her portrayal of Lady Jessica feels very accurate to how the character acts in the book. Throughout the book and movie, Lady Jessica’s relationship with a specific character changes, and you can clearly see her changing view of this character through Rebecca Ferguson’s subtle expressions and actions.
Another positive for this movie is the cinematography. Being a Denis Villeneuve film, the movie is pretty much guaranteed to look great. The movie’s grand scale is accomplished through wide shots of palaces and open deserts. The blend of practical sets and CGI works quite well. There were a few notable shots of a computer generated ship landing that looked a little too fake, but otherwise, the movie has great visuals.
It’s been explicitly stated, prior to the film’s release, that this movie covers about the first half of the novel. The creation of a second movie has already been announced. It was definitely a wise decision to not try to cram the entire book into one movie. The book just has too much content to properly fit it into a movie under three hours.
One thing to note is that reader’s of the book may have an issue with the structure of this movie. Without giving any spoilers, a major plot point that occurs in the book is heavily foreshadowed. Within the first few chapters, this plot point seems more and more like something that will inevitably happen at some point in the novel. When it does occur, the reader is not surprised, because the author treats this plot point as something that was bound to happen. In the movie, this plot point is foreshadowed far less, and is almost treated as more of a twist. While I think this approach helps the movie build more tension, readers of the book may be a little disappointed with the fact that the movie builds up to this twist and then only covers a small portion of the plot that follows. In the novel, this event is treated as more of a stepping stone, and the reader is forced to consider what will come next for these characters. Most of the really interesting and memorable parts of the book are in the second half, after this stepping stone is crossed. In the movie, so much time is focused on this stepping stone, that the movie has no time to move on to the scenes that readers of the book are eager to see. (Obviously, I cannot speak for all readers of the book when I say this, but it’s just something worth noting.) I still really enjoyed the movie, but I can see how those familiar with the novel may be left unsatisfied and annoyed that they have to wait two years for a second movie.
So, how does Dune stand in the filmography of Denis Villeneuve? Denis Villeneuve is one of the best working directors, so most of his movies are great. I can confidently say that Villeneuve has added another solid entry into his filmography with Dune. That being said, I can also confidently say that Dune is not as good as his magnum opus Blade Runner 2049, or even his other film Prisoners. What holds Dune back from being as good as these other movies is the lack of emotional payoff. Don’t get me wrong: Dune has some emotional scenes, but most of the character growth has yet to be seen. How can only half of a story deliver as much emotion as the completed stories of Prisoners or Blade Runner 2049? Well, it can’t.
Ultimately, I really enjoyed Dune. It’s a mostly faithful adaptation with great performances, a wonderful score, and amazing cinematography. When the second part releases, I will be in the theater on opening night.