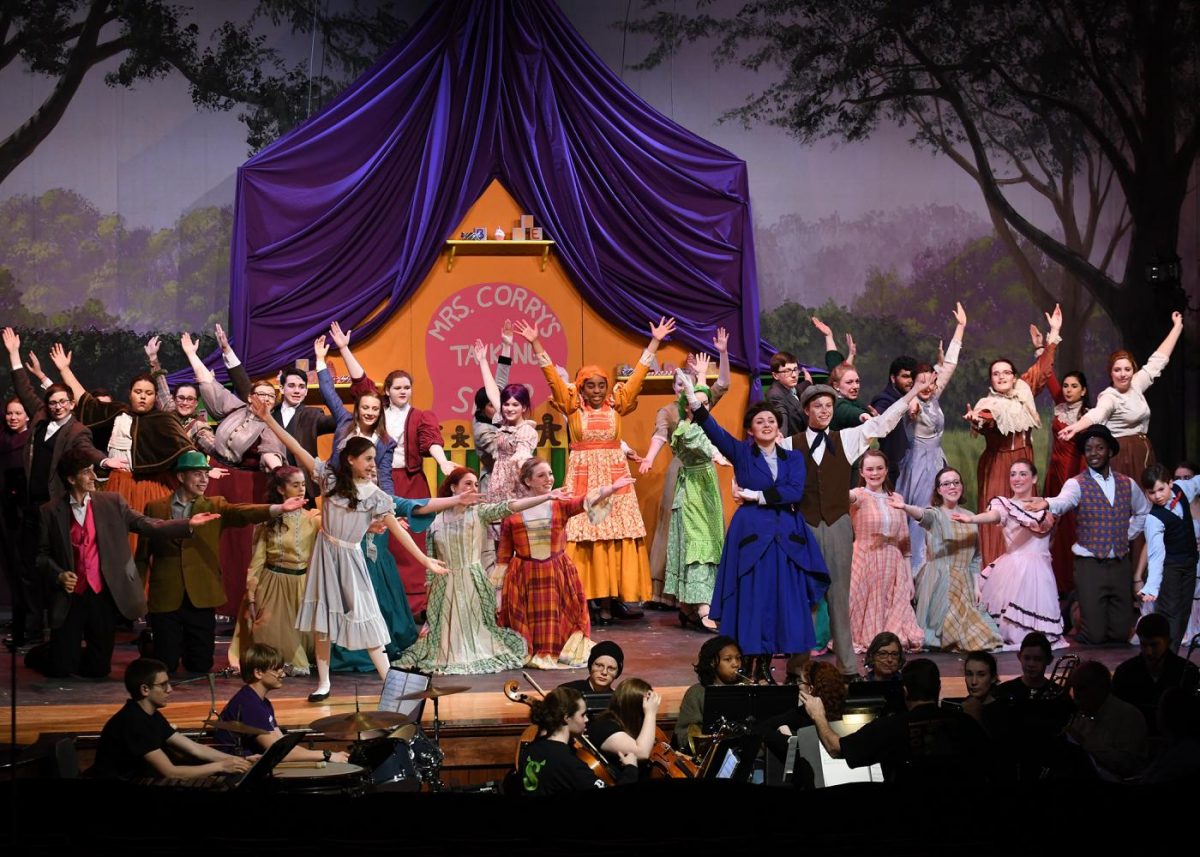 It’s always a jolly holiday with Mary, as the cast celebrates the wonder that is this show with precise choreography, spot-on casting, and ecstatic singing.

Mary, Bert, and the Banks family flew from London to the BHS stage a few weeks ago, in “Mary Poppins: The Musical,” the stage play based on the staple childhood movie of the same name. The stage adaptation honored the original spirit of the Disney movie while also introducing some new plot points and characters that enhanced the central themes of childhood, whimsy and magic, and the power of belief.

The dominating theme of the plot is childhood, which encompasses the more serious tones of the show. It is physically represented by Michael (Nico Corrado) and Jane (Brooke Ryan) and their adventures with Mary (Megan Campbell) and Bert (RJ Frankenberry). Then in contrast, when Mary suddenly leaves, the idea of growing up is introduced when their characters realize that they’ve taken her for granted. Their arc is paralleled by their father’s rediscovering and confrontation of his past. This approach became clearer to the adults in the audience, that between the jokes and dance numbers, the actors were also working to create the drama of realistic family dilemmas, which was the heart of the show. This balance between the serious and light-hearted moments drove the plot, and the jokes and slapstick that offered a good laugh were wonderfully timed by the household staff, Mrs. Brill (Sarah Bosari) and Robertson Ay (Ryan Hecht).

After hours and hours of rehearsal, the grand company numbers: “Jolly Holiday,” “Supercalifragilisticexpialidocious” (Can’t forget how to spell that one), and “Step in Time” created palpable energy and excitement on the stage and in the audience. Each number had a different energy, from Nellius (Tommy Froessel) and the statues coming to life, to Mrs. Corry (Caitlin Otto) and her fantastic talking shop, to the tapping chimney sweeps and Bert who defied gravity by going over the rooftops with the help of harnesses and wires. Just by seeing the production numbers alone, it was clear that BHS brought something atypical of high school theatre, something that was a spectacle and revealed pure magic on stage.

The real “Spoonful of Sugar” was the leading lady, Mary Poppins, herself. Megan brought a “Practically Perfect” amount of proper British poise, adding her personality and a spectacular soprano voice to the role. Paired with Bert, the upbeat-chimney sweep, street artist and jack-of-all-trades, RJ brought an eager energy in playing the dapper gentleman, making the two of them a memorable duo. In addition to Mary’s and Bert’s great chemistry, the actors who portrayed Mary, Michael and Jane, accurately relayed just how much they grew to love one another in how their relationship unfolded on stage. Other highlights included the proper British father stuck in his ways. George Banks, as played by Aaron Lurin, had the right amount of maturity and sternness to make him the traditionalist, middle-aged banker who was countered by wife Winifred Banks, as played by Erin Vaughn. Erin successfully brought Mrs. Bank’s character conflicts with being just a housewife to the center, giving her a resilient spirit in the end. Also, there were great feature roles like the “other” nanny, Miss Andrew, as deliciously played by Taylor Byrne, who fully embraced the wicked nature of her character, and the Bird Woman, as played by Martina Rossi, whose melodic voice made the iconic “Feed the Birds” absolutely breathtaking.

Congratulations goes out to director Stephanie Rubino and the rest of the cast, crew and pit for a true spectacle. Whenever BHS does a show, the students involved get an opportunity to touch people’s lives in a way that only the arts can. BHS and the community has been lifted up by this show, and we all can’t wait for next year.

All photos courtesy of 4sonsphotography