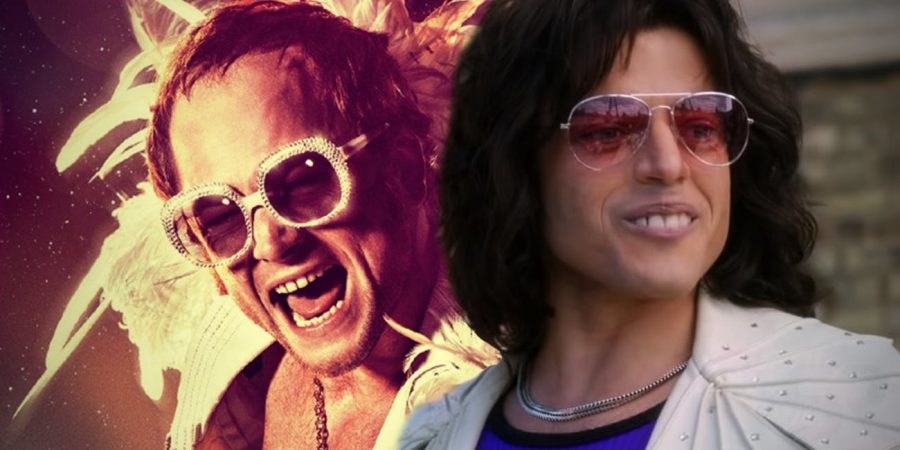 Legend vs. legend, Elton John and Freddie Mercury square off in films based on their lives: Bohemian Rhapsody and Rocketman. Released in November 2018, Bohemian Rhapsody is a biopic that tells the story of Queen frontman, Freddie Mercury, and his life in music. Six months later, Rocketman was released on May 31st and is a fantasy biopic about the life of performer, Elton John.

When discussing these two stories, it is impossible to ignore the parallels that occurred between these two artists in their lives. Both talented British artists rose to fame in the 70’s-80’s, and dealt with issues of isolation, manipulation, substance abuse, and hiding their sexuality from the eyes of the public. Both also hold their spots as rock-and-roll icons: staples of the genre with their exceptional and classic music, and their extravagant styles of performance.

Despite the similarities between the artists and the music, the execution of Bohemian Rhapsody and Rocketman could not be any more different. Rhapsody is a biopic that focuses on the band Queen, but is mainly centered on Freddie Mercury (real name Farrokh Bulsara) and his contributions to the band, as well as delving into his personal life, his struggles with addiction and substance abuse, and his manipulation at the hands of Paul Prenter and his unconventional romance with Mary Austin. Bohemian Rhapsody was nominated for five Academy Awards, winning four of them, including one for actor Rami Malek, who portrayed Mercury in the film. Despite these accolades, the response to Rhapsody has hardly been an entirely positive one, with many people criticizing the poor editing and writing, as well as the detriment caused by the replacement of Bryan Singer as director – replaced by Dexter Fletcher halfway through production. These issues are reflected in the film’s Rotten Tomatoes score – an astonishingly low 61%, joining Extremely Loud and Incredibly Close, and Out of Africa as one of the lowest-scoring films to be nominated (and win) an Academy Award. A film full of missed opportunities, Bohemian Rhapsody glazes over the lows of rock-and-roll, and rolls out a heavy stream of one-dimensional characters that doesn’t do justice to the people they represent. Still, the ambiance, costumes, and fantastic music, as well as the attention to detail and commitment to re-creating the images of the original band, are undeniable.

Described as a “musical fantasy,” Rocketman is so much more than your average biopic. With Elton John (Reginald Dwight) at the helm of much of the producing and writing, Rocketman follows the rules of a musical movie more than anything else, featuring extravagant dance numbers and sequences that highlight the music and its connection to John’s story. Rocketman features musical numbers recorded by lead actor Taron Egerton, who absolutely dominates the screen as John. Prone to tantrums and fits of rage, his dedication – from gaining and losing weight to selectively losing hair and shifting teeth – is displayed in a varied and moving performance. From his fist line (“My name is Elton Hercules John, and I am an addict”), he commands the attention of the audience, in the same way that John did years ago. Due to its R rating – the one that was demanded by John himself – Rocketman does not shy away from the darkness and depths of what John endured during his addiction and suicidal periods. These dark moments – mixed with fantastic imagery and music that reveals the inner workings of John’s mind – are portrayed through an intimate and unapologetic look into what the artist was truly feeling and connects to the songs we know and love. The artist shows us what essentially got him through his struggles: music.

With all this under its belt, Rocketman still has some moments that strike the wrong key. The young actor who plays John is featured in some notoriously bad moments, often sharing awkward and downright cringey stares and smiles. This is exemplified especially in a scene in which the young actor sings a verse of the title song “Rocket Man” while John is attempting suicide. The facial expressions and terrible singing by the young actor pull the audience completely out of the scene and undermine what is one of the most tragic and somber moments in the film. The ending can also be considered a notable flop. Occurring at the beginning of a new phase in John’s life, the ending features “I’m Still Standing” and shows recreated images of the original music video. However, instead of imagery of a triumphant return or a major shift, the film ends abruptly with clips from this video and a short epilogue photo sequence – almost denying the audience the chance to see John truly revived.

The music featured in both films is simply undeniable. From the classics that you know and love to the lesser-known diamonds that finally get their chance to shine, the music is guaranteed to pull you into each film. How could you not clap along to “We Will Rock You” or shake your feet to “Crocodile Rock”? The music from Rhapsody was sampled and spliced together from clips of Mercury’s performances and albums, while the music in Rocketman is performed and recorded by the cast themselves. In Bohemian Rhapsody, the story surrounds the chronology of the release of the music, showing which songs gave them their start and helped them rise to the top. Starting with early songs like “Killer Queen” and the title song “Bohemian Rhapsody,” the plot is centered around the writing and production of the music and fits into the moments from Mercury’s life that follow the release of these songs. In Rocketman, John does not follow the story of the music: the music follows him. The wild and rambunctious youth belting “Saturday Night’s Alright” and the depressed and abandoned John slowly composing “Don’t Let the Sun Go Down on Me.” Unlike Bohemian Rhapsody, where the playing of songs is introduced and portrayed as the live performances that truly occurred, most of the singing in Rocketman occurs as it would in a musical, with John randomly beginning to sing what he is feeling, and often having other members of the cast join in, as well. With this model, Rocketman is prone to more heavily produced production numbers, having characters singing and dancing through the moments in John’s life with fantastical dream sequences flying around them, making the music in Rocketman more impactful and important.

One aspect that both movies excel at is the impeccable attention to detail. This is exemplified in the efforts of both Rami Malek and Taron Egerton, who each committed to detailed and eerily similar portrayals of the lives they are representing. The mannerisms, accents, swagger and interests of both John and Mercury are produced as almost exact replicas, and both stand as a testament to these actors’ abilities and commitment to their roles. The costumes also help to aid this effect, with replicas of the performer’s most iconic outfits reproduced for the screen. Showing the extravagant and intricate costumes of John’s, as well as the unique and vivid costumes of Mercury, further cement the identical nature of these actors to their sources. There are moments in both of these films that you can forget are clips, when you completely forget that you are not watching aren’t the real thing. This occurrence is especially true in the re-creation of Queen’s performance at “Live Aid” – a scene that takes place at the end of Bohemian Rhapsody; an almost twenty-minute scene follows the actual movements of the band perfectly, with the entire cast hitting the same poses and moving the same way as the original band did many years ago.

Another aspect that Bohemian Rhapsody does better than Rocketman is the ending. While both movies end in short photo montages explaining the lives of the artists and the people around them in the future, Rhapsody does much more to showcase a finale while still shooting. As previously mentioned, the ending to Rocketman occurs abruptly – in the middle of a song – and does not leave much imagery for the audience upon which to build. The ending to Bohemian Rhapsody, however, shows Mercury in a blaze of glory; still infected with AIDS and unsure about the future, but back where he belongs, with his band in front of his crowd, and free of the toxic elements that lead to his downfall. The final moments swell as the triumphant “We are the Champions” rings out over Live Aid, and we see Mercury back where he belongs.

Whether you are more John or Mercury, there is no denying the effect these films have had on the fans and on the legacies of these stars, whose stories follow eerily similar paths. Rocketman or Rhapsody? Who wins? Depends on what you need out of a film.