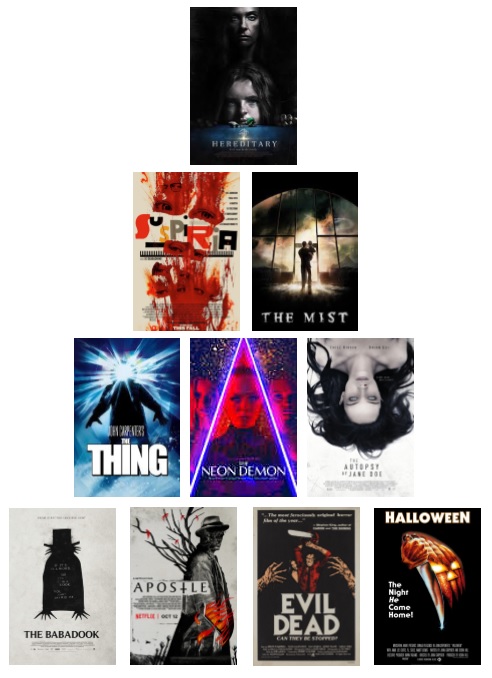 Yes, summer is the time for blockbuster action movies, but those long summer nights are also a great opportunity to take in a cinematic scare or two. Here are my Top 10 favorite horror films for you to check out.

1. Hereditary (Rotten Tomatoes score 89%)
After the passing of the Graham family matriarch, the rest soon learn that their lives have much more purpose, in a sinister way. With Satanic prophecies mixed into everyday life, Hereditary is downright terrifying. From the small background details to the last thirty minutes of the movie, you can’t help but watch it more than once to understand its genius. With every viewing, you’ll catch more and more hidden details and plot points, making this movie one you will never tire of.

Suspiria is about a German dance company run by witches. Terrifying in its own right, its muted colors, and sinister score amp up the horror to an alarming degree. This remake takes top spot over the original, due to how much it delves into historic folklore and the witches’ society. Suspiria keeps the audience on edge by flashing between the reality of 1960’s Berlin and the dark underbelly of what is truly happening inside the dance company.

3. The Mist (RTS 72%)
Based on a novella from the King (Stephen, of course) of horror himself, The Mist is about a group of regular folks who get stuck in a grocery store after a mysterious fog covers the whole town. What’s interesting about the actual mist is that you never find out the full story about how it came to be. Though at first, you might be more focused on the horrific monsters and the disturbing deaths they inflict upon the people of the grocery store, you soon learn that the true monsters are the townspeople themselves.

4. The Thing – 1982 version (RTS 84%)
In remote Antarctica, a group of American researchers is interrupted by a helicopter shooting at a dog. Sympathetically, they take in the dog and soon learn they made an otherworldly mistake. The Thing leaves you shrouded in the dark regarding its actual creature origins but makes up for it with its world-renowned grotesque practical effects. With moments of high tension and audience manipulation, The Thing is a classic not just for its ability to scare, but because you’ll never trust anyone ever again.

5. Neon Demon (RTS 58%)
Neon Demon is about a young aspiring model who learns that beauty is everything when she becomes the unwilling target for a coven of witches. Through its brightly lit and mannered backdrop, pulsing score, and slick Eurotrash-like direction, the film draws in the audience’s eyes and ears, along with plenty of grotesque scenes and sexual undertones. Deeply disturbing and thought- provoking, Neon Demon is definitely not for the faint-of-heart or weak of stomach.

6. The Autopsy of Jane Doe (RTS 87%)
When father and son coroners are requested to do an autopsy on a Jane Doe, they find that the more they investigate the more bizarre things become. While a slow start, the film picks up momentum, but not where you would expect as the story lies in the details. During the brief 86 minute runtime, unsettling occurrences are much scarier then jump scares that are normalized in today’s horror industry. Though the conclusion has a few plot holes, the expert acting and slow build-up of the first hour more than makes up for it.

7. The Babadook (RTS 98%)
A single mother consumed by grief battles with her son’s bad behavior and his seemingly unrealistic fear of a monster lurking in the house, but she soon realizes that her son’s fears might be based in something that is very much real. Unsettling and dark, The Babadook is a movie that leaves you afraid of turning off the lights. Filled with high tension moments and uncomfortable family issues, it’s hard to tell what unsettles the audience more: the Babadook or the main characters themselves.

8. Apostle (RTS 80%)
Ex-missionary Thomas Richardson sets off to retrieve his captured sister from an island off the coast of Wales, inhabited by a cult-like group in 1905. But as soon as Thomas arrives, he realizes that there’s a dark secret that the group is hiding. With amazing gore, Apostle is a movie with plenty of scenes that are sure to make your skin crawl and your stomach drop. The plot and dialogue are so attention-grabbing that Apostle is a movie whose images will be burned into your memory forever.

9. Evil Dead – 1981 version (RTS 95% )
After Ash Williams, his girlfriend, and their three friends go to a remote cabin in the woods for a fun night away, they find a book called “The Necronomicon” and read it aloud. They soon find that they have awakened the dead and must try to survive or become dead themselves. The first of Sam Raimi’s trilogy, this low-budget horror film has some of the most iconic practical effects and is guaranteed to keep you hooked with fantastic, over-the-top acting combined with a unique and interesting plot. A groundbreaking classic, its influence is seen everywhere but can never be imitated.

10. Halloween – 1978 version (RTS 95%)
On Halloween night, while being transferred for a court date, Michael Myers steals a car and escapes Smiths Groves where he was sentenced for murdering his six-year-old sister, Judith. Michael then returns to his quiet hometown of Haddonfield, Illinois, where he claims his next victims. This low-budget film has aged so well because it wastes little time on character development and theme, but focuses on creating an atmosphere that sends shivers down your spine. With beautifully executed cinematography, Halloween is a true staple of horror movies and its simplicity and quick to-the-point plot is what makes it so beloved and world-renowned.